Avatarland has been under construction for some time at Disney’s Animal Kingdom, but today at the D23 Expo, we got a few more details about what we can expect with this new land.

First of all, I guess we’ll need to stop calling it Avatarland. Its official name will be Pandora-The World of Avatar. According to Imagineer Joe Rhode, when visiting Pandora, you are not visiting moments from the film, the adventure is one that is yours. The goal is to create a place that you believe to be real.

This will be apparent when you ride the banshee attraction, which will be called The Flight of Passage. Guests will ride on the backs of the banshees giving guests a birds-eye view of the beauty and grandeur of the world of Pandora on an aerial rite of passage.

The second attraction for Pandora-The World of Avatar will be the water based attraction where guests will ride into a bioluminescent forest. It will be a ride perfect for the entire family.

Currently Pandora-The World of Avatar is expected to open sometime in 2017.

You can see that Disney is truly working to make Disney’s Animal Kingdom a nighttime destination park. One way they are accomplishing this change is by creating ways to showcase the spirit that happens in this park at night. To really showcase that spirit, fireflies are going to host us into the magic of nature that can be found out there.

Heading over to Kilimanjaro Safaris, they are going to be extending the attraction into the evening with guests traveling through the African savannah, where the orange glow of sunset will occur indefinitely into the night. The population of the animals found in the safari will increase with two great new species – the hyena and African wild dogs. The nighttime safari is expected to take place beginning next spring.

In addition, guests will be able to experience the new nighttime spectacular, Rivers of Light, which will take place on the Discovery River, and is slated to to be a ceremonial event that happens nightly on the water. It takes the idea of the very special nature of animals that are found in the park and turns it into a celebration of light itself. The show will start simply but will grow and unfold with lanterns, curtains of water and light, until it crescendos into the sky. The show will utilize a combination of light, fire, water, and live performers to create a rich experience. Rivers of Light is expected to open in the spring of 2016.

By the time all is said and done, Disney’s Animal Kingdom is going to be a completely different park than it currently is and it is going to be exciting to watch it transform into a great all day destination. 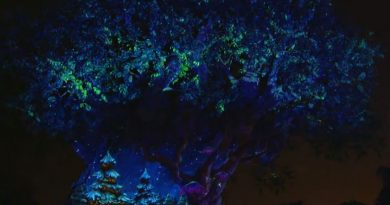