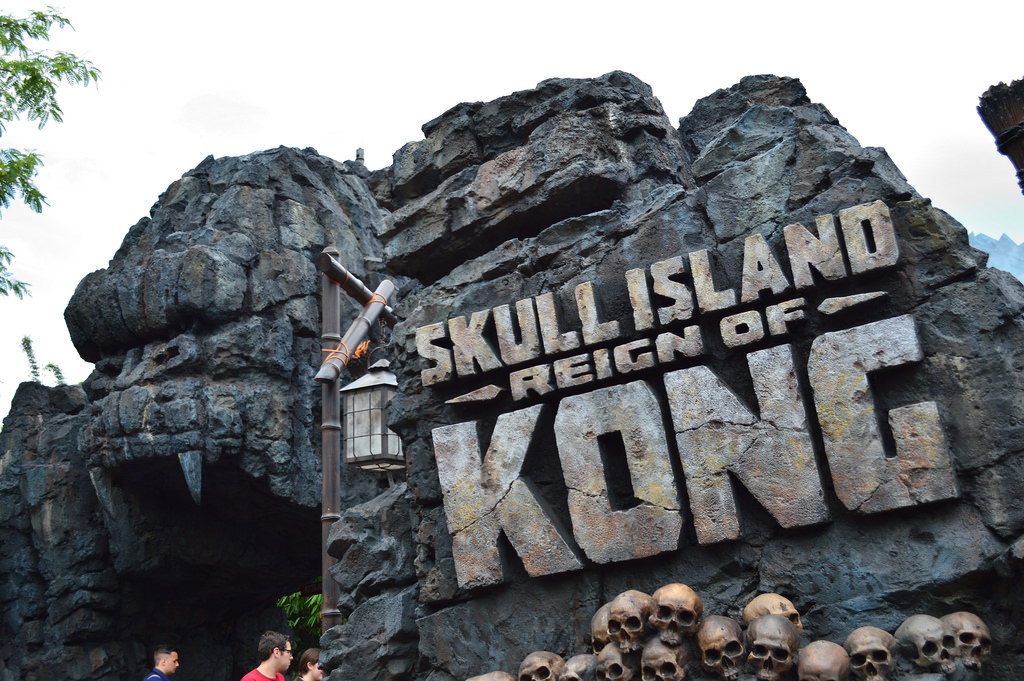 This week’s SATURDAY SIX looks at Reasons We LOVE the queue for SKULL ISLAND: REIGN OF KONG. Over the last two years, Trygve Nelson and Seth Kubersky have been tracking the progress of Skull Island at Universal’s Islands of Adventure. Earlier this month it began technical rehearsals and started letting guests experience the attraction. One area that has drawn consistent raves is the queue. Over the last fifteen years, Universal has become the best in the business at building queues in which people actually enjoy spending time in line. Guests walk through what seems like the actual movie set for Men In Black: Alien Attack. At The Simpsons Ride, in two separate pre-show rooms, guests enjoy some hilarious jokes written by actual writers of The Simpsons television show. Meanwhile guests get to tour the Daily Bugle in The Amazing Adventures of Spider-Man (which even has a dedicated themed experience just for Express Pass guests, allowing them to see Peter Parker’s dark room). Universal then perfected the queue experience with Forbidden Journey and Escape From Gringotts, creating lines guests actually wanted to spend more time in. This was not just the theme park equivalent of breaking the four minute mile, this was breaking the three minute mile.

The good news, is that not only does Skull Island: Reign of Kong continue Universal’s era of incredible queues, it becomes the first to take a page from the Halloween Horror Nights playbook and be extremely creepy as well. A good queue sets up a ride’s story and atmosphere, and Skull Island takes that to the next level. The giant facade alone, with seemingly thousands of skulls strewn about and a giant ape head made carved out of rock, is something pretty intense for the theme park world. Inside, the queue gets even better. Today we are going to look at six reasons we love the Skull Island queue, including some details many guests may miss when walking through. So sit back, grab a banana, and let’s start our countdown with…

# 6 – Reference to Revenge of the Mummy

Kongfrontation was an opening day ride for Universal Studios Florida back in 1990, and was based more or less around the King Kong film from 1976. Like Jaws, this was an iconic Universal ride that many guests fondly remember to this day. Kongfrontation closed in 2002 to make way for The Revenge of the Mummy. As with many recent attractions, Mummy has several tributes to Kong in both the queue and attraction itself. In an Inception-like nod, Skull Island has a reference back to Revenge of the Mummy. As guests load onto the ride vehicle, to their right will be several skeletons. One of these skeletons is just like one of the skeletons that rise up and attack guests in the Mummy’s impressive throne room sequence.

Back in March, Universal started teasing their upcoming Kong attraction through the Myth Explorer web series and blog featuring Erin Ryder. In several of her updates, the 8th Wonder Expedition Company was seen or mentioned. In the Skull Island attraction, right before guests grab their 3D glasses, they will be able to see a crate stamped with this mysterious group’s logo. Many Universal fans, including Your Humble Author, believe Universal should have a full line of 8th Wonder Expedition Co. merchandise available. As of this writing, there is nothing.

We mentioned earlier a part of the queue references the 1976 film version of Kong, but our next item will be more well known to viewers of the 2005 version of King Kong by Peter Jackson. In that movie, a particularly scary scene involves giant bugs attacking our heroes. Among those bugs are nightmare-inducing slugs, which Universal now has recreated in animatronic form in the Skull Island queue. Creepy is not even the word for this slug which, not only moves around but has several rows of teeth coming out for the attack (not unlike the Xenomorph in Disney’s The Great Movie Ride.)

One room in which most Skull Island guests will remember long after the ride is over, is the impressive room which contains an eerie witch animatronic standing in a giant skull. It is a show stealing scene, and one that is going to have people taking pictures from the second they enter the room until the moment they leave. The combination of the room’s design, the fire effects, and the witch provides a spine tingling moment for anyone who experiences it.

We here at the SATURDAY SIX appreciate the little things more than anything else. Whether it’s the voodoo dolls in Jock Lindsey’s Hangar Bar, the Nautilus hidden in the rock work of The Little Mermaid queue, or the signed characters sketches in Disney’s Art of Animation Resort, we love keeping our head on a swivel and seeing all the little details that both Disney Imagineers and Universal Creative put out there for us like breadcrumbs. For Skull Island, we absolutely loved this little statue of the Empire State Building, which is of course where King Kong had his memorable last stand.

When it was announced that Universal was hiring scareactors for the Skull Island queue, many of us couldn’t believe the news. It had been many years since the last time scareactors were used in the queue for any attraction (previously it was for Revenge of the Mummy.) In a era in which theme parks in general seem to be doing as much as possible to get rid of the human element in attractions, it seemed too incredible to believe that Disney or Universal would go through the added expense of putting walk around characters into a ride’s queue.

But Universal did it.

Not only are the characters in elaborate make-up and costume – just like their HHN counterparts – they have the opportunity to give  jump scares to guests already freaked out by the ominous queue. This scare is set up earlier in the line when guests get a look at one of the “natives” os Skull Island, using the same musion technique we’ve seen before in the major Potter rides. From a distance, most guests will wonder whether or not they saw a real person or a screen, only for the actual scareactor to reveal themselves moments later. We are in the golden age of Universal theme parks, and having scareactors in the Skull Island queue shows that absolutely nothing is off the table when it comes to designing new attractions. How can you not be extremely excited for the future?!

For a FULL TOUR of the Skull Island: Reign of Kong queue, showing all the nightmarish nooks and creepy crannies, check out this video by the King and Queen of theme park vlogging: Tim and Jenn Tracker.

The immersive theming begins with the larger than life facade, continues through the elaborate queue, but even when you board the actual ride vehicles there are details to catch. If you look closely at the vehicles you’ll see claw marks, giving a warning to anyone stepping onboard that you may not be coming back…

We’d recommend not eating or drinking before entering the Skull Island queue, unless you have a second pair of pants ready. But when you’re finished with the ride, you gotta make a quick stop at the nearby Mess Tent for the KONG DOG (don’t say that three times fast) and the Banana flavored Icee.

So there you have it: Six Reasons We LOVE the Queue for SKULL ISLAND: REIGN OF KONG. See you next weekend for the latest installment of the SATURDAY SIX, where we’ll look at something fun from the world of Disney and Universal. If you enjoyed yourself, be sure to check out The Magic, The Memories, and Merch! articles, or, for your listening pleasure, check out the E-Ticket Report podcast. You can also follow Your Humble Author on Twitter (@derekburgan)

Six Reasons We Love JURASSIC PARK in Islands of Adventure

Special Thanks to crack staff photographer Brandon Glover, #blocked and reported for spam Michael Sheehy, Theme Park YouTube ICONS Tim and Jenn Tracker,The Iron Stomach Amusement Buzz, photo wizard Travis Terrell of UUOP’s Deadman’s Digest podcast, and blogger to the stars Megan Stump for their invaluable assistance with this article. Be sure to also check out Brandon on The Park Blogger podcast with co-host Aengus Mackenzie along with Meg’s Yeti To Be Named Disney Podcast. 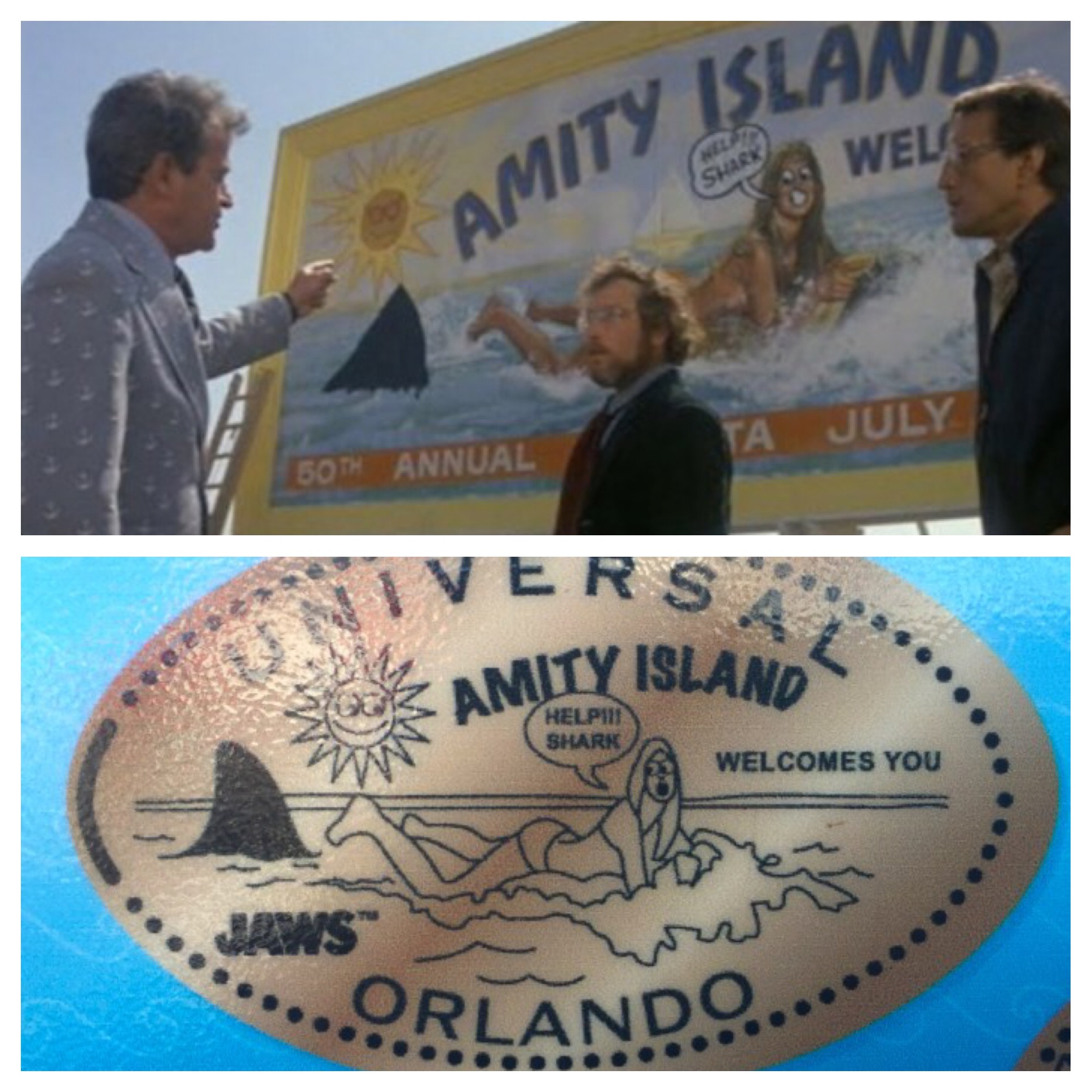 3 thoughts on “SATURDAY SIX: Six Reasons We LOVE the Queue For SKULL ISLAND: REIGN OF KONG”