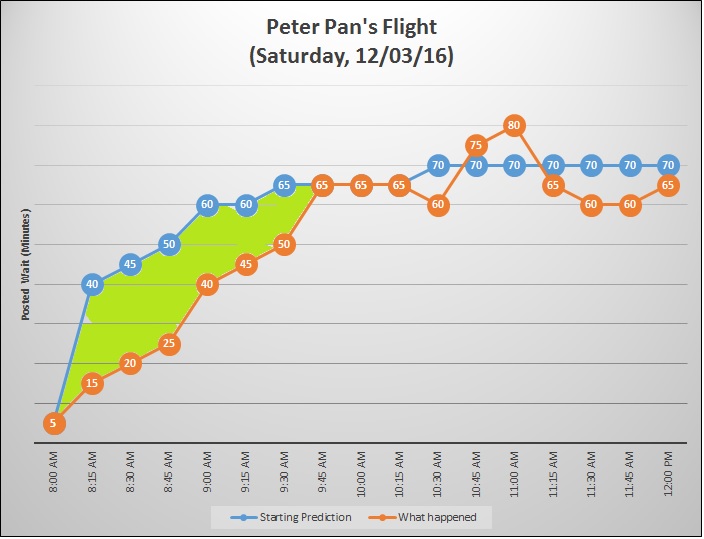 Laurel and I spent this past Saturday in the Magic Kingdom. Our job was to see how much time you can save in line by following a touring plan on our Lines app, as compared to a printed touring plan.

The big advantage to using the app, of course, is that you can update your plan as you move through the park. That’s great if you want to add more attractions, breaks, or Fastpasses. It also means that we can update your plan to take advantage of unexpected short lines, and route you around any trouble spots that pop up. We wanted to see how much time that could save you in line.

Here’s the plan we both started with, taking us through lunch. We used the plans’ slower walking speed to mimic what a family with small children might experience.

We weren’t able to get Fastpasses for Seven Dwarfs Mine Train or Enchanted Tales with Belle. The touring plan had put those in late afternoon, after we had to leave the park. We’ll test them on another trip soon.

Starting our day in the Magic Kingdom

The Magic Kingdom opened at 8 a.m., and we were past the turnstiles by 7:35 a.m. Laurel had picked the paper touring plan and I was using Lines. The park opened a few minutes early, so we were the first people to meet Mickey Mouse, right at 8 a.m. Here’s us meeting the Big Guy. I asked Lines to update the touring plan after meeting Mickey Mouse. Lines didn’t suggest any changes, so we went off to play Buzz Lightyear. It doesn’t matter who scored more points because life isn’t a competition, my glasses were really dirty, and someone kept moving the ride car like a drunk with tremors. I’m just saying.

Things got interesting right after Buzz. Lines updated my touring plan, sending me to Peter Pan’s Flight while Laurel headed off to the jingle-themed Jungle Cruise.

What Lines had noticed was that the line for Peter Pan’s Flight wasn’t growing as fast as we though it would. Because Peter Pan’s lines would be relatively short for a little while longer, it had me take advantage of the shorter lines. Here’s a graph of our original prediction for Pan’s wait times, and how they actually played out during the first part of the day: The Lines app took advantage of the time gap shown in green. My actual wait in line at Peter Pan was 10 minutes – a savings of 47 minutes from the plan’s estimated 57 later in the day.

Incidentally, the Lines app updates its intraday wait time estimates every 5 minutes during the day, starting right after the park opens. The silver line in the chart below shows how Lines adapted its Peter Pan forecasts once it saw a few wait times showing how the day started. The pink dots represent actual wait times in line. Laurel’s is the 54-minute wait shown above – she was so far ahead of schedule that she got in line at Peter Pan earlier than suggested. She might have saved 15 minutes in line by going on to another ride, because the wait just after 11 a.m. was definitely lower. But at that point in the day, the only things Laurel had left to do in the Magic Kingdom were our two Fastpass rides, and A Pirate’s Adventure.

The Rest of the Day

Lines didn’t update my plan for the rest of the day, so the only switch I had was with Peter Pan.  I walked on to both Jungle Cruise and Pirates of the Caribbean, and neither boat was full when it left its dock. It’s common for Lines to suggest Adventureland attractions in mid-morning, especially if you’ve got enough Fantasyland attractions to spread across morning and afternoon.

My longest wait of the day was that 10 minutes at Peter Pan. I ended up giving back a few minutes at Dumbo and The Many Adventures of Winnie the Pooh because of that detour to Peter Pan, but I still ended up completing the plan with about 35 minutes less wait than the printed plan.  And we had a nice lunch at Be Our Guest to end the day. 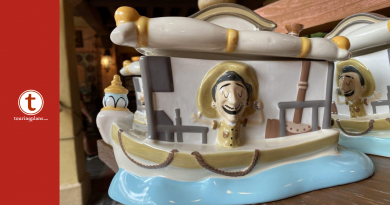