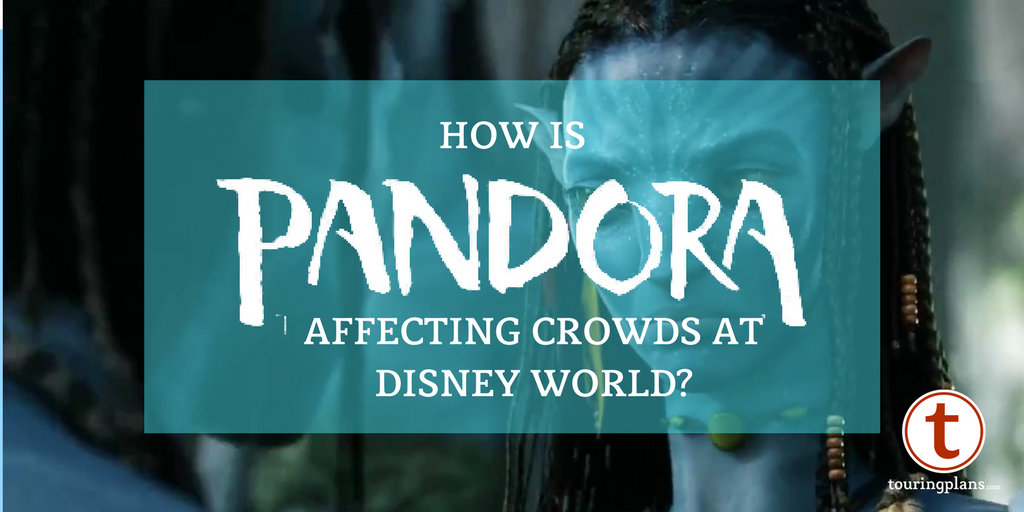 Pandora – The World of Avatar has been open for a month, and we now have enough data to see the initial impact  the new land is having on attendance at Animal Kingdom and at Walt Disney World, in general.

Before I get into the analysis, I want to cover what we do know and what we don’t. We don’t know Disney’s attendance numbers. Disney does not release daily attendance numbers. We do know posted wait times, actual wait times, ride capacity, and ride duration. Since we don’t have continuous user input for actual wait times, we use our actual wait times and estimate actual wait times based on posted wait times. With this information we can estimate the number of people on each ride, as well as how many people are in the ride queues. We make the assumption that a park’s attendance is proportional to the number of people at its attractions. The proportion is not important for this analysis, but for those who are curious, we believe it is 1-to-3. So for each guest at an attraction, there are two guests shopping, eating, walking, waiting, watching a show, or doing anything else in the park. To fine-tune our estimates we assume the average attendance for the first four months of 2017 is the same as it was for the first four months of 2016.

When I use the term “attendance” below, I mean the hourly average number of guests at attractions. I am NOT referring to the total number of people at the parks.

The chart above shows that attendance in 2016 and in 2017 follow similar patterns. Spring break fell at different times in the two years. The Annual Passholder previews for Pandora – The World of Avatar helped to increase attendance on weekends in May. May 27, 2017, was the opening day of Pandora – The World of Avatar, and there was a significant jump in attendance. Starting on June 8, the 2017 attendance is back down to the 2016 levels. Between May 27 and June 7, at Walt Disney World the 2017 average attendance was up 6,373, or 18%. As of June 8, the average attendance is up 1,349, or 4%. The hourly capacity of the two Pandora attractions together is about 2,900 people. If the increase in average attendance stays below 2,900 people, non-Pandora attractions are seeing fewer visitors. In other words, guests are spending less time at old attractions to experience Avatar Flight of Passage and Na’vi River Journey. This is just initial data, and no one (including Disney) knows the long-term impact of Pandora – The World of Avatar. However, based on what we’ve seen over the past month, it looks like the people that wanted to be among the first to see the new land have come and gone. Now we are just seeing normal summer attendance at Walt Disney World.