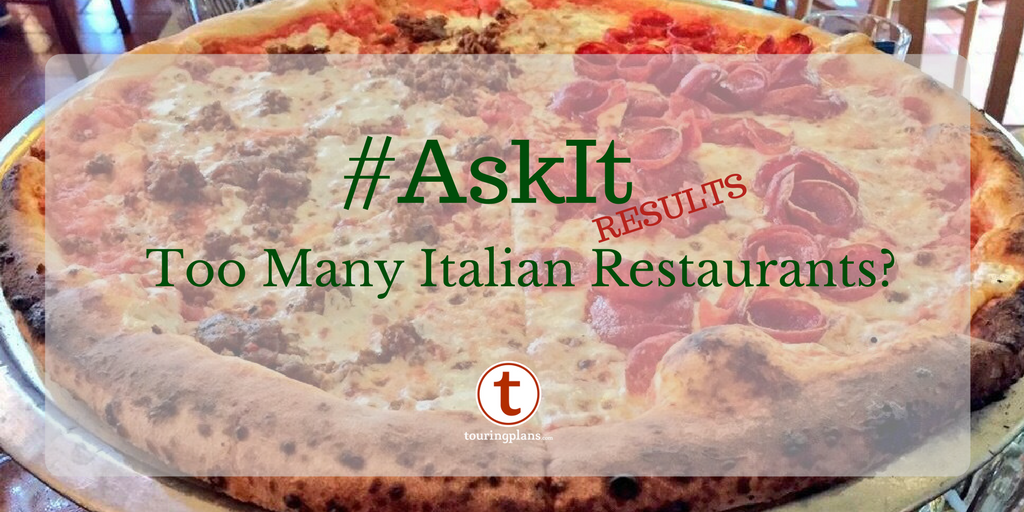 Buongiorno! It’s time for another round of Ask It results. I hope that you’ve brought your appetite, because we’re talking about a favorite cuisine–Italian. It’s very easy to say that for most Americans, Italian food is a favorite that almost everyone can agree on. Disney is well aware with this, and has quite a few Italian restaurants on property. But how much is too much? Last week we asked you:

Are there too many Italian restaurants at Walt Disney World?

First, let’s give a quick rundown of Italian restaurants at Walt Disney World. Depending on whether you include pizza as Italian food or as its own creation, you still end up with a lengthy list. At Magic Kingdom, you have Tony’s Town Square and Pinocchio Village Haus. At Epcot, you’ve got Tutto Italia, Tutto Gusto, and Via Napoli. Heading over to Disney’s Hollywood Studios, you’ve got Mama Melrose and PizzeRizzo. At Animal Kingdom, you’ve got Pizzafari. Wandering around the resorts, you’ve got Boardwalk Pizza, Trattoria al Forno, Ravello, and Il Mulino. (And that doesn’t include quick-service locations at resorts that have a pizza or pasta station.) And then there’s Disney Springs: Blaze Pizza, Enzo’s Hideaway, Maria and Enzo’s, Pizza Ponte, Wolfgang Puck Express, and Terralina on the way. (I suppose you could also include Vivoli Gelateria, too.)

That’s a lot of pasta.

Although the amount of food at Walt Disney World is very diverse, there’s still plenty of other restaurants that people would like to see. (I would personally love a Sushi-Go-Round or really any restaurant where you take food from a conveyor belt. I’d even settle for an Automat in Tomorrowland. Just me? Okay, then.) Although having one or two places in a theme park or a handful of places at resorts spread out isn’t that jarring, the amount of Italian restaurants at Disney Springs feels a bit much for many people. There’s so much potential for amazing options at Disney Springs, and certainly there are many on the way, but Disney Springs is the one place where almost everyone agreed that maybe there can be too much of a good thing.

It’s hard to find a person living in the United States who doesn’t like American-style Italian food. The Olive Garden near my house, squarely in the Tourist Zone, is so packed on most nights that finding a parking space is difficult. Whenever an office party comes up where food is to be ordered in, pizza is a safe bet. Disney wants to keep guests happy, and if that means building an Italian restaurant on every corner, that’s what they’ll do. The line for Blaze is consistently out the door, and getting a reservation for Via Napoli can be a challenge at times. As long as demand is there, it’s hard to say that there’s too many places to fill that demand.

In between the Yes and the No votes was the overlying theme that the quality and creativity of Italian food is lacking in many cases. Yes, an Italian restaurant needs to have the basics, but it doesn’t seem that many restaurants want to go beyond that. Those that attempt to are faced with cringe-worthy prices for the average guest. (It’s hard to justify a $50 pizza or a $30 plate of spaghetti, and so more specialty cuisine would be even more jarring in price.) So at the end of the day, it may not be that Disney has too many Italian restaurants as much as Disney has too few *good* Italian restaurants. 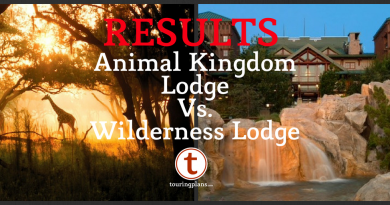 8 thoughts on “Ask It Results: Too Many Italian Restaurants?”