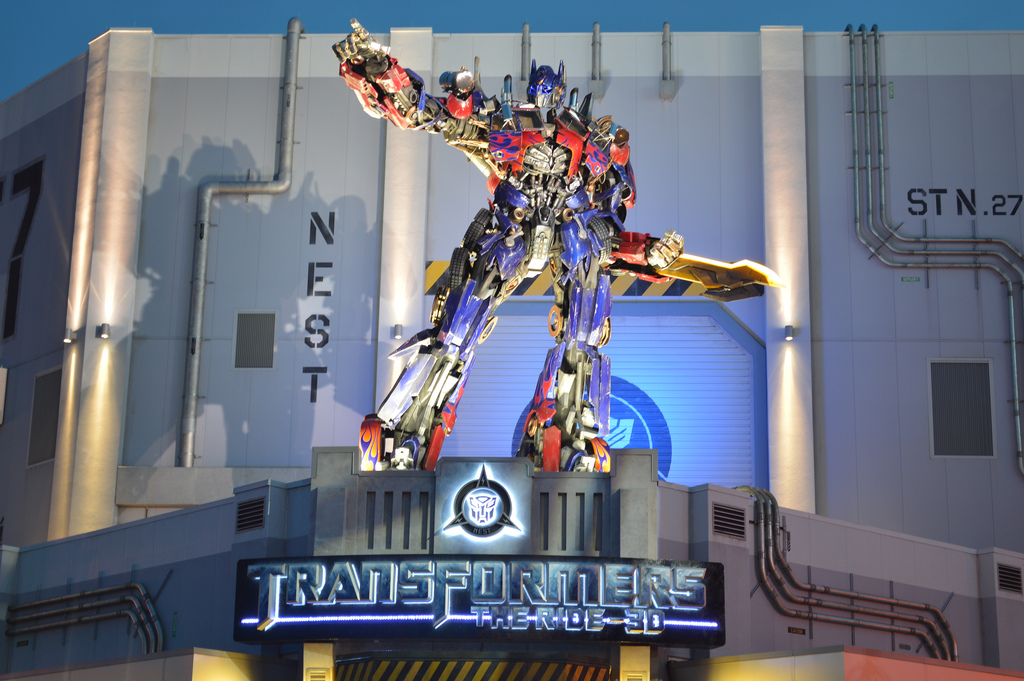 This week’s SATURDAY SIX takes a look at Transformers: The Ride-3D! Seeing Disney reboot all its animated classics into live action films got us to thinking. What if we here at the SATURDAY SIX went back and “reimagined” some previous articles? Some articles – such as Extreme Eats at Walt Disney World – have items that are no longer made or have completely changed (such as the “new and improved” King Whoopie Pie at Pop Century.) Today we are going to go back and “remaster” the very first article Your Humble Author ever wrote for Touringplans, and it was originally presented the week Transformers: The Ride-3D opened at Universal Studios Florida almost five years ago.

Ah the Summer of 2013. We had all just been disappointed by Zach Snyder’s Man of Steel, not realizing at the time that it was just the first of many DC film misfires. Kim Kardashian gave birth to a direction with North West, Leah Remini left Scientology, and we all rocked out to Robin Thicke’s “Blurred Lines.” It was a simpler time back then, and in the theme park world we were all shook by the fact that Universal Studios Florida was opening their new Transformers ride. This seemed absolutely IMPOSSIBLE to believe because Universal had just started building the attraction in July of the previous year. On June 20th, 2013 Transformers had its grand opening, and the attraction brought with it a whole bunch of awesome things for theme park fans to enjoy. Today we’re gong to look at our favorite parts of Transformers: The Ride-3D and let’s kickoff the countdown with…

As meet-and-greets have become a bigger presence within the theme parks, Universal has taken them to the next level with some of the most insanely detailed costumes to date. Rumored to cost over $20,000 a piece, Megatron, Optimus Prime, and Bumblebee take pictures with guests at the Photo Connect station located directly next to Transformers: The Ride-3D. Both Optimus and Megatron have pre-recording lines to spice up the interaction, while Bumblebee has music clips. Just watching the characters walk out to their location is impressive as it delivers on the “wow” factor. With Talking Mickey about to be silenced at the Magic Kingdom, the Transformers may be the most impressive character meet in all of Orlando.

One reason we all love going back to theme parks again and again is because of the wonderful Team Members and Cast Members that go above and beyond to make special moments for us and other guests. The pictures don’t do justice to how incredible these meet-and-greet characters look in person, but while guests aren’t allowed to get too close to these giant robots, on one occasion Universal made an exception. Matthew is a hearing impaired child who loved the Transformers. Matthew couldn’t hear what Optimus Prime was saying, but the Team Members brought him over to feel Optimus’ “heart,” which would vibrate when he talked. Moments like this are what make theme parks special.

“Foolish Earthlings, don’t you know all rides must end near the gift shop.” – Kodos, The Simpsons Ride

What used to be almost a dreaded part of every theme park attraction now becomes something to look forward to as The Supply Vault, the gift shop for the Transformers ride, is filled with cool, unique, and exclusive merchandise. Not only can you get the requisite t-shirts (including a great “Robots in Disguise” shirt that has the Autobot logo with a mustache on it), but the store is loaded with toys, magnets, rings and other forms of merchandise with both the current version of Transformers as well as Generation1 version of Transformers, the cartoon from the 80s that many guests grew up watching (in fact my secret shame – or maybe proudest moment – is owning not one but two different versions of Transformers: The Movie on DVD.)

Once you’ve been to theme parks countless times, its the little things that start to stand out. We happen to love all of the various “Easter Eggs” found throughout Universal and Disney. Many of our favorites include references to long gone attractions, such as Back to the Future‘s Doc Brown making an appearance in the queue for The Simpsons Ride, several references to Jaws in Diagon Alley, and Twister at Race Through New York starring Jimmy Fallon. While Transformers: The Ride-3D does have a reference on the show building paying tribute to the area’s former attraction Hercules and Xena: Wizards of the Screen, our favorite Easter Egg features a throwback to the old school Transformers from the 1980s. That’s right, the good ol’ days when Megatron transformed into a weird hand gun, Soundwave into a cassette player, and Bumblebee was a Volkswagon Beetle. At the end of the Transformers ride, keep your eyes open for the yellow Volkswagon Beetle with a cleverly placed piece of debris covering up where the Autobot symbol would have been.

One of the best surprises of the entire ride is that guests are sitting in a Transformer throughout the attraction. Exclusive to Universal Studios, Evac is the perfect character to guide guests through this story and unlike Spider-Man – where we are watching all the action take place around us– we get to actually be a part of everything going on throughout the ride. To top it off, EVAC is an exclusive figure available at Universal Studios, giving the perfect synergy between a brand and a theme park ride. Star Tours at Disney’s Hollywood Studios has several “exclusive” action figures you can buy, but not a single one of those characters make a memorable appearance in the ride, whereas Evac is the ride for Transformers, and a brilliant ride at that.

And guess what? Here’s a full review of the EVAC Transformers action figure. For those readers who remember what it was like for me trying to put together that Star Wars Metal Earth Death Star – or the four plus hour experience putting together a kid’s jeep – you can imagine how well this went.

There’s no ifs, ands, or buts, Universal Creative has been KILLING IT lately when it comes to delivering top of the line queues for guests to wait in. Harry Potter and the Forbidden Journey along with Escape From Gringotts have queues and pre-shows that are almost as impressive as the attractions themselves. The Simpsons Ride has jokes by actual writers of The Simpsons television show. Who would have thought Shrek 4D would have a ton of Disney references? Race Through New York Starring Jimmy Fallon may be the first attraction in theme park history where the queue actually blows away the ride experience. Transformers: The Ride-3D has guests walking through various rooms of the building, each with their own unique flavor. One room has a video that has the set up of the ride explained to the guest with an appearance by the Autobot Ironhide. Another room has a shard of the Allspark cube. Later guests encounter a impressive prop with the tail of the Decepticon Scorponok (who had a memorable appearance in the first Transformers live action film back in 2007). While Express Pass and Single Rider lines may get you through the queue quicker, it’s highly recommended that the first time you experience this attraction you go through the Stand By queue and see the amazing story laid out in front of you.

The biggest complaint you’ll hear about Transformers: The Ride – 3D is that it is “too much like The Adventures of Spider-Man.” Now, putting aside the fact that Spider-Man is still possibly the greatest theme park attraction ever made, there is a difference. Much like what happened with the conversion of the Tower of Terror to Guardians of the Galaxy: Mission Breakout at Disney California Adventure, Transformers gives fans of the Spider-Man attraction a completely new “ride profile.” Transformers is a frenetic version of Spider-Man, and the advancement in technology since Spidey was built allows for the incredible illusion of speed along with photo-realistic imagery.

If you asked 20 guests what their favorite part of the ride was, you’d probably get 20 different answers: it’s that cool. Getting sucked out of the subway by Devastator…seeing Optimus and Megatron go at it…having a missile come right at you and explode…it’s one thrilling moment after another. Unlike the incomprehensible movies that the ride is based on, the story and action throughout the attraction is easy to follow. This is not a ride; it’s an experience. I’m not a a huge fan of 3D, but Transformers and Disney’s Flight of Passage are types of attractions where I can admit, “Yes, 3D made this attraction much better.” The effects are sharp, vivid, and give a true dimension of depth to enhance the guest experience.

So there you have it: Six Reasons We Love TRANSFORMERS: The Ride-3D! See you next weekend for the latest installment of the SATURDAY SIX, where we’ll look at something fun from the world of Disney and Universal. If you enjoyed yourself, be sure to check out The Magic, The Memories, and Merch! articles, or, for your listening pleasure, check out the E-Ticket Report podcast. You can also follow Your Humble Author on Twitter (@derekburgan).

6 Reasons We Love PORT OF ENTRY

Moves and Television Shows FILMED AT the Universal Orlando Resort

Special Thanks to crack staff photographer Brandon Glover, Universal super shopper @HedgehogsCorner, photo wunderkind Mike Sperduto, Mr. ‘Ohana Tim Grassey, hot shot Michael Carelli, and blogger to the stars Megan Stump for their invaluable assistance with this article. Be sure to also check out Brandon on The Park Blogger podcast with goofballs co-hosts Aengus Mackenzie and LitemAndHyde , while fellow Potterheads may enjoy Meg’s work on the Central Florida Slug Club. 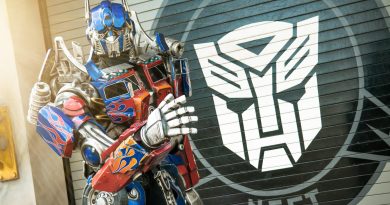 One thought on “SATURDAY SIX: 6 Reasons We Love TRANSFORMERS THE RIDE-3D”