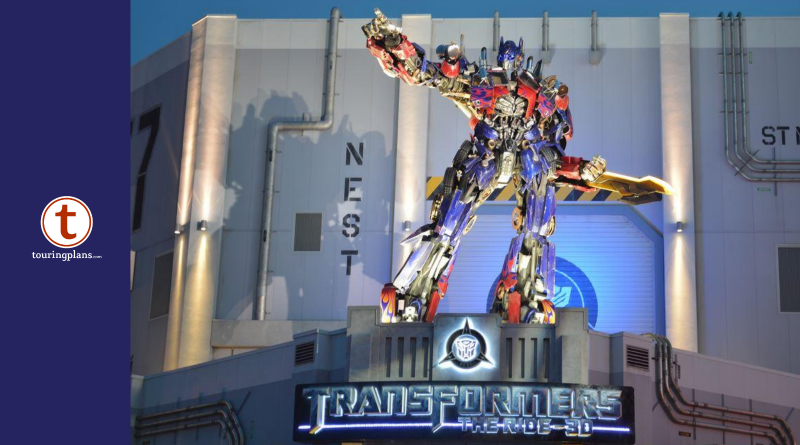 This week in Getting to Know Universal we take a look at those robots in disguise and their attraction at Universal Studios Florida, Transformers: The Ride-3D!

Based on the Michael Bay movies, Transformers puts us inside one of the eponymous robots as we hurtle through a city to protect the planet. This attraction first opened in Universal Studios Singapore in 2011 and was quickly copied in Hollywood and Orlando. Transformers replaces the old Soundstage 44 which was home to the Murder She Wrote Mystery Theater and Hercules and Xena attractions.

Set up after the events of Transformers: Revenge of the Fallen, the queue starts at the NEST (Nonbiological Extraterrestrial Species Treaty) base. As we walk in we see the AllSpark, the magical mechanical McGuffin that grants Autobots their sentience. The AllSpark’s popularity rivals a Tickle Me Elmo on Black Friday and soon the base comes under siege by the Autobots’ nemesis, the Decepticons. The evil robots plot to steal the glowing rock and use it for their own nefarious purposes on earth. Once at the loading platform guests board new Autobot EVAC to escort the AllSpark out of the base and to safekeeping.

What follows is a mad-cap chase through a bustling city as multiple, name-checked Decepticons ambush EVAC. The attraction heavily borrows tricks from Spider-Man in Islands of Adventure, combining high resolution projected 3D imagery, physical sets, and a motion simulator base to give the illusion of speed. One highlight of the ride takes guests from a city street set, flys them through an under-construction skyscraper on video, and back into a skyscraper set. The film is razor-sharp and does not suffer from blurred images like some older 3D attractions.

In the end, the Decepticons are defeated, the AllSpark is saved, and we are declared freedom fighters by Optimus Prime. Guests unload in the battle-worn NEST facility before hitting the gift shop full of Transformers toys and knick-nacks.

Transformers is a must-see attraction at Universal Studios Florida for all ages but its biggest fans are teenagers and those who grew up with the toys and animated show. Yet it still does not fully escape the shadow of its older brother, The Amazing Adventures of Spider-Man located next door in Islands of Adventure. Most of the tricks pulled on Transformers can be found in Spider-Man where they are executed better. If you are touring both Universal parks in one day and must cut something, skipping out on Transformers and riding Spider-Man instead is our advised choice.

Transformers is one of the biggest name attractions at the resort. With its central location and popularity expect long queue waits all day. We advise riding the first half hour the park is open or after 4:00 p.m., or by using the single rider line (when available).

Is Transformers on your must-ride list? Let us know what you think in the comments.

2 thoughts on “Getting to Know Universal – Transformers: The Ride-3D”