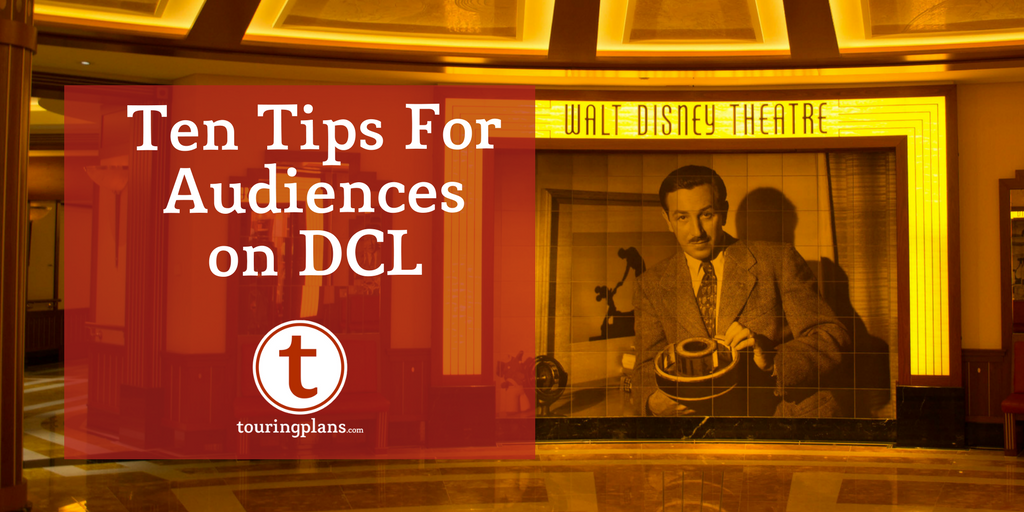 The famed philosopher George Costanza once said, “You know, we’re LIVING in a society.  We’re supposed to act in a civilized way!”  Truer words may never have been spoken by the man who brought us “Serenity now!”, but sometimes we and our fellow Disney Cruise Line guests struggle to remember the words of the great man. Is there anyone else out there amused/intrigued/bothered/appalled by the way a few of our fellow guests, or maybe even ourselves or members of our travelling group, behave in shows of any kind these days?  I sat behind a little boy at a Disneyland show the other day who played Candy Crush during an entire show – with the volume turned all the way up, and with nary a word about it by his adult caretakers.  Or how about guests who watch videos on their mobile devices in public with the sound on?  When did this become okay (have we stopped LIVING in a society, people!?!?)?

Luckily the lack of affordable, accessible internet will cut down on some of these problems on a Disney cruise.  Still, I’ve been in an awful lot of Disney shows where it was hard to pay attention for one reason or another lately.  So, I thought some general guidelines of civilized (and uncivilized) behavior might be nice to discuss, because I know we all want to gain the approval of Monsieur Costanza!  Add more if you know George would approve!

1. No Talking – Why does this even need to be said? Please do not talk once a show begins! I’m not talking about a quick comment whispered to the person sitting next to you.  Like “That was awesome!”  I’m talking almost anything said in a regular voice, and any whispers that turn into full conversations.  Like the tweenage girl who sat in her mother’s lap during a Disney Nature film a few years ago onboard the Wonder right beside my husband while the two had a conversation in full voice about animals.  You may think you’re being quiet.  You’re not.  People around you are trying to hear the performers.  Or the movie!  They can’t if you are talking.  Whatever it is, it can wait.  If it can’t, then step out! 2. Don’t Use Your Phone – Again, I can’t believe this isn’t obvious. But I sat in Black Panther on the Magic a few weeks ago when the person behind me answered their Wave Phone. Answered.  And talked.  And didn’t leave.  While it’s true that I didn’t pay for that movie (well, I didn’t pay for a movie ticket to see it, but I did pay to take the cruise), I still wanted to hear it!  I get that the Wave Phone call could be something important like the nursery.  So if it rings (vibrates), just step out and take that call!  While we’re at it, don’t send messages (or do anything else) on your phone.  That tiny bright screen in a dark theater is like a bug light to the people behind you just waiting to zap them (“No!  Harry, No!  Don’t look at the light!”, “I can’t help it, it’s so beautiful!”).  If you need to send a message, or answer one, step out.  If you’re just checking what time the next activity is, don’t.

3. Don’t Sing – Everyone may not agree with me on this, but try not to sing along unless it’s a singalong event or the cast invites you to sing. I know, I know, Buddy the Elf says, “The best way to spread Christmas Cheer, is singing loud for all to hear.” And I know it’s hard to pass up a chance to sing that favorite song, but the people around you came to hear the performers, not you.  So, please, save it for karaoke later unless you are invited to sing as part of the show! 4. Don’t Save Seats – Disney makes an announcement repeatedly that seat saving is not allowed, and guests constantly ignore it. I’m not talking about someone coming in with you and stepping out to get popcorn or use the restroom before the show starts. I’m talking about sending Grandmom and Grandad to save 10 seats (and telling other guests they can’t sit in those seats) while the rest of the family takes their sweet time getting there.  Like some restaurants insist on, sit down when your entire party has arrived.  If some of your family wants to go in and sit with lots of seats around them hoping they will still be empty later, that’s fine!  But if your family has not arrived and someone else wants to sit down, let them.

5. Don’t Lean Forward or Let Children Stand on the Seats – The Walt Disney Theater is tight. The seats are on a slope, but aren’t true stadium style seats. They’re built so the average height person should be able to see over the average height person’s head in front of them (or between the two heads in front of them).  If you lean forward, that doesn’t work anymore.  Your head is actually blocking the line of sight for the people slightly above you.  If you are on the same level surface as the person behind you, your head is lower.  If they’re above you, you’ve blocked their angle.  This may be a short person problem, my own husband didn’t believe me that this is true, but it happens regularly to me.  In the same way, if you let your child stand in a chair or on your lap, they’re suddenly taller than the average person, and the line of sight doesn’t work anymore.  For younger children, booster seats are available, making sure they can have a seat and still see the action. Sit back, sit down, and everyone behind you will appreciate it. 6. No Glow-in-the-Dark/Light-Up Toys – I mentioned how bright a phone screen is in a dark theater, well light-up toys are as well. I know Disney sells them like hotcakes during deck parties at night, but if at all possible, drop them off in the room before you come to the show. If you can’t, put them on the floor.  I sat behind a child waving hers around constantly during the show and it was amazing how distracting it was.  I loved the enthusiasm, just not the light! If you have kids with light-up shoes, evening shows and movies may be a time for a quick pre-show costume change to “regular” shoes so they don’t start sparkling when those toes start tapping.

7. Arrive on Time – Get to the show before it starts! Don’t come late. You’re distracting other people when you come in late and start looking for a seat.

8. Stay Out of the Aisles – Don’t stop in an aisle or down the sides of the theater to look for your party once the show has started. Every second you spend in the aisle is a second that you are blocking someone’s view.  Disney also reminds guests to stay out of the aisles, as they often use the aisles for performers during the show.  But when one bubble starts floating down from the ceiling, people forget that rule was ever made!  When snow, bubbles, or confetti start flying, and they do, the aisles are full of excited children.  I get it!  That’s exciting for children!  And some adults who would cut someone for a few pieces of Mickey head-shaped confetti for their scrapbook.  But go ahead and stay in your row along with those excited kiddos.  It’s not just so others can see, it’s also much safer than being caught up in that frenzy! 9. Take Out Crying Babies – I get it. Babies cry. That’s okay!  Mine cried as well.  But, if babies cry during a show, please take them out.  If you can’t get them to stop within a few seconds, take them out and try outside the theater.  Trust me, no one can hear around you when a child is crying.  No one for a very long way around you.  We’re built to hear that and want to help crying babies.  I was in Beauty and the Beast on the Dream two weeks ago and the child behind me cried for at least 5 minutes before someone took him/her out.  It wasn’t an isolated incident, it’s a loud show with some startling noises.  So give those babies a break from all the noise if that’s what’s upsetting them! If you think your baby may not do well in the show and you don’t want to use the nursery, many shows are broadcast through the evening on your stateroom television.

10. Stay Until the End – Apparently when the cruise director gets up to close the nightly shows, it’s a sign that half the audience should get up and walk out–while the cruise director is still talking! Would George agree with that?  Well, he might or might not depending on which episode you’re watching, but it is distracting to those trying to hear the cruise director, or just trying to be polite!  There’s nowhere on a ship you must get to that quickly.  The one thing you shouldn’t be late to, just happened.  It won’t kill you to wait two more minutes before you get up.  This is not a NASCAR race.  You will not be stuck in the parking lot for hours if you don’t leave early.

Was that too harsh?  Would George approve?  Would he say to me, “Well, the Jerk Store called, and they’re running out of you!”?  I don’t mean to be a negative Nellie, I’m just hoping to make our Disney Cruise Line society a little more civilized! 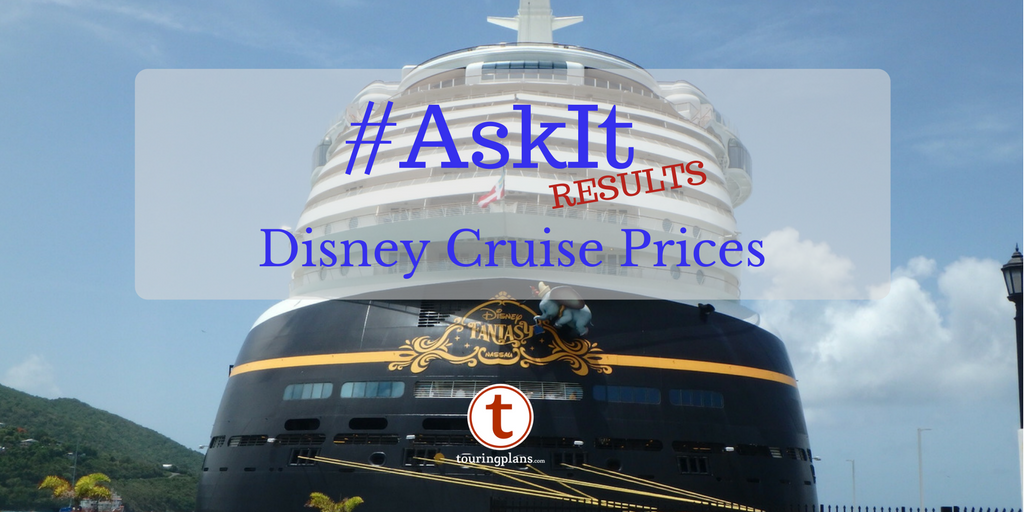 Ask It Results: How Much Does Your Upcoming Cruise Cost? 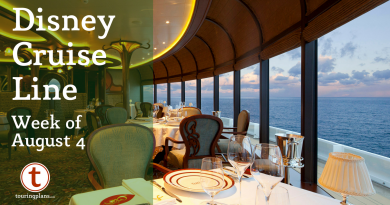 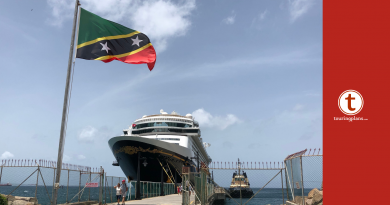