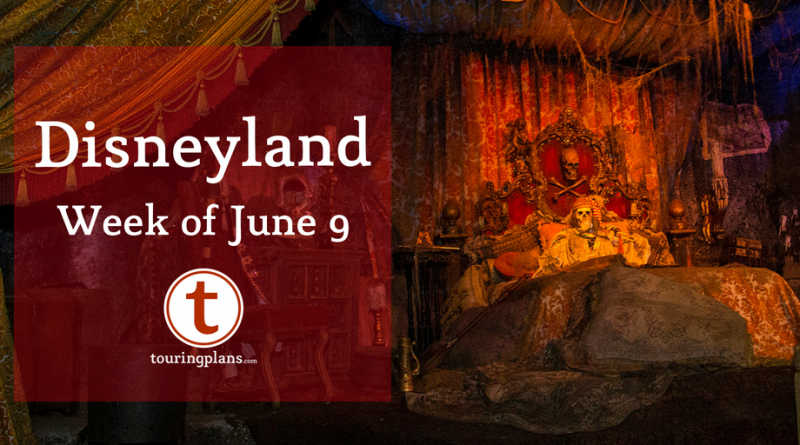 Pirates is back, Pixar Fest continues, and Grad Nite wraps up at Disneyland this week! Read on to find out about these and more in this week’s Disneyland preview.

The refurbishment of Pirates of the Caribbean is complete, and you can now see the new version with the update to the auction scene. Expect it to be busier than usual these first few days as people line up to see the new version.

Pixar Fest continues! During this festival, which runs through September 3, you’ll find Pixar-themed fireworks and the Pixar Play Parade at Disneyland Park, and the return of Paint the Night at Disney California Adventure, though you’ll also encounter other Pixar-focused activities and opportunities. There will also be special dining opportunities available, as one would expect, and the Alien Pizza Planet is open at Disneyland Park for the occasion. Make sure you check out Rikki’s preview of the Festival!

Grad Nite will be hosted for the final time this year on Saturday, June 9, at Disney California Adventure.  That park will host a private party after regular park hours, but expect more teenagers in the parks that day prior to the evening event as well.

Crowds are predicted to be the highest on Sunday and Monday — level 8 both days — with the remainder of the week having roughly average crowds. Summer is officially here, with highs in the 80s, and even approaching 90 on a few days. Thankfully, no rain in the forecast, so should be a nice week in the parks! The refurbishment list is thankfully pretty short right now. At Disneyland Park, Indiana Jones Adventure is undergoing a brief refurbishment this week and will be down from Monday through Friday. Over at California Adventure, the Boardwalk Games at Paradise Pier, Carousel, and Pixar Pal-A-Round (f/k/a Mickey’s Fun Wheel) are closed during the area’s conversion to Pixar Pier, and World of Color is dark during Pixar Fest (at least through June 21), but the remainder of the park is all up and running. Check out our refurbishments page for details on exactly what will be down and for how long.