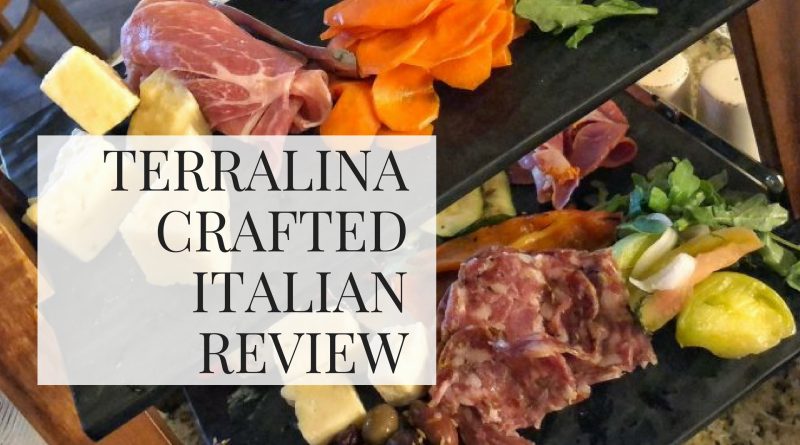 Just last week, Disney Springs added another new Italian restaurant to the slate of offerings, with the opening of Terralina Crafted Italian. Located in the former home of Portabello, Terralina is really more of a re-imagined take on this space, with a completely renovated interior and brand new menu from Chef Tony Mantuano. I visited opening day and again during opening weekend to get a taste of these new dishes (seriously, so many dishes – I tried nearly every dessert!), and to see how Terralina compares to all of the newer Disney Springs dining options.

The restaurant’s exterior hasn’t changed much from the Portabello days, but the big upgrade is really the addition of an open air bar and seating area facing Riverboat Square (who knew that area in front of Paddlefish had an official name?). Just inside the front doors, you’ll find the new lobby, complete with a beautiful fireplace and seating area for guests awaiting dining tables. A long bar sits at the center of the restaurant (with open seating and full menu available), with several dining rooms circling around it, each featuring a slightly different take on the restaurants “Italian Lake District” theme. Overall, the restaurants wood features and warm tones throughout the décor lead to a very homey feeling, always a nice touch before settling down to a meal.

Like most of the restaurants at Disney Springs, Terralina is open continuously from lunch through dinner, serving an all-day menu (with a few sandwiches only available at lunch), from 11:30 AM every day until 11:00 PM or 12:00 AM on weekends. Reservations are suggested, but there is quite a bit of walk-in availability each day given the massive size of the restaurant. Currently, reservations are only available on OpenTable, but if you’re looking for availability after July 30th, they will accept bookings through My Disney Experience, as well.

Both of my meals during opening week featured excellent service, with servers giving honest recommendations and eliciting real feedback about the dining experience (plus, plenty of managers and even the Executive Chef walking around asking the same – always nice to see when a restaurant first opens). Overall, my first meal took a bit longer than I had anticipated (especially as a solo diner with no special requests), but great service more than made up for that and hardly made me notice the occasional latency. My second meal was definitely faster, so it seems like the chefs are growing into the kitchen well and I’d expect smoother sailing from here on out. My first meal was mainly a snacking one, with a few appetizers to munch on before a leisurely walk around Disney Springs. Based on my server’s recommendations when requesting a lighter kind of meal, I ordered the fried olives, burrata, and funghi pizza. The fried olives were first to arrive, a small portion of seven green olives stuffed with herb ricotta cheese, then breaded and fried ($7). Crunchy, savory, and creamy, these didn’t initially impress me with the serving size for the price, but after realizing I’d quickly eaten the entire bowl, I’ll definitely be ordering these again. Next up, the burrata appetizer ($13), which is probably most aptly described as a deconstructed salad. The menu lists this as containing “lemon, beets, kale, crostini”, so it certainly sounds like a salad, but it’s served in its parts. You may be staring at the photo of this dish and wondering why it looks so different from the description – I was equally confused when I received the dish. Kale is nowhere in sight; instead, a mound of peppery, vinaigrette-dressed arugula sat in its place (no great loss, honestly). The crostini was totally missing, a shame, because the house bread (a mash-up of focaccia and ciabatta) was so good, I was curious to try it. In spite of these missing and substituted pieces, though, the dish was great – tons of lemon zest piled on the creamy burrata cut through its richness, and the beets, roasted then slightly pickled in a bright and lemony vinegar, were absolutely divine in their refreshing but still earthy notes. Finally, I sampled the funghi pizza ($15, one of many varieties available, all freshly made in-house). This pie is about the same size and thickness as what you’d find at Blaze, with sparse toppings (which I was told helped to “bring out the flavor of each ingredient” – to each their own). In truth, I wasn’t a fan of this pizza – it didn’t have enough going on toppings-wise to really wow me with flavor, and the crust was an odd combination of crisp but slightly tough, which seemed to indicate an overmixed dough and underheated oven. I hope this was just a one-off issue, and not indicative of the pizzas in general, but for now, I’d say stick to Pizza Ponte if you want a good Italian slice. On my second visit, I sampled two more appetizers, both highly recommended by my server for those with a heartier appetite. The spaghetti fritters ($12) sounded intriguing – it’s basically a spaghetti pomodoro ball stuffed with mozzarella, breaded, and fried, kind of a fun take on the traditional arancini rice balls (which are also available at Terralina). Three golf-ball sized balls come per portion, perfect for sharing, and are a great way to sample the restaurant’s excellent pomodoro sauce (both inside the ball and served on the side for dipping). Run, don’t walk, towards these when Finally, we had to sample the signature appetizer, the antipasti tower (listed as serving four, for $36). This massive double-decker plate comes packed to the brim with prosciutto and capicola, grana Padano and parmesan cheeses, tomato mozzarella salad, grilled zucchini and red peppers, more of those delectable beets from the burrata appetizer, marinated olives, pickled carrots and onions, and crunchy house-made pecorino-truffle potato chips. It’s pricy, to be sure, but this definitely works as a quality shareable appetizer for 3-5 people, or even as an entrée with maybe one other appetizer for two folks looking for a snacky kind of meal with some wine.

We also sampled two entrees on my second visit, which I decided upon after much discussion and fierce questioning of our very patient server. I initially gravitated towards on of the “For the Table” options, which are served family style for two people, priced on the menu at $26-42 per person, dependent on your selection), but my server was very honest in his assessment that these three dishes, while great tasting, weren’t necessarily worth the value. It’s not often you hear that kind of candor, and I really did appreciate it – at what would’ve amounted to $76 for an entrée for two people, the house-made porchetta with apple mostarda and shaved fennel salad sounded great, but if better options exist, bring them on instead.

Eventually, we decided on to start with the gnocchi ($25), featuring Nonna’s pork ragu and shaved parmesan. These gnocchi are on the large side, but weren’t tough or gummy, which is always my fear when ordering them at a new-to-me place. The pork ragu featured both shredded and ground pork, and was incredibly rich in both slow-cooked and fresh tomato flavors, working alongside the fresh herbs that were visible in the sauce. For the price, I think this is a really high quality pasta dish, much better in flavor and value than comparable options at Maria & Enzo’s or Enzo’s Hideaway just around the corner.

Again upon recommendation from our excellent server, I decided on the parmesan duo “from the hearth” for our final entrée ($24). This dish is a smaller portion of both the eggplant parmesan stack and the chicken parmesan entrees ($21 and $24, respectively), and comes alongside a rather large portion of spaghetti pomodoro. The chicken was kind of standard – not quite crispy enough, and could have been a little warmer in temperature; my dining companions and I decided Maria & Enzo’s version was a bit better quality. The eggplant stack, however, was divine. It looked to be four or five thicker slices of eggplant (large enough that you could actually taste the veggie’s flavor), layered with the same herb-ricotta from the fried olives, then breaded and fried on the outside, and covered in more melty, caramelized cheese. I could’ve eaten this all night long and been perfectly satisfied, and I definitely can’t wait to get back to Terralina just to have this as an entrée.

You’d think with everything I’d already sampled, there would be no reason to try dessert. You’re correct, and yet, over the course of two nights, I ended up sampling almost the entire dessert menu because everything looked and sounded so good. Here’s a quick rundown of everything I sampled!

So Good I’ve Already Gone Back To Try Them Again

How Does Terralina Measure Up?

Overall, I was satisfied enough with my first meal at Terralina, and blown away by my second meal. Service was consistently good both nights, and the food quality was definitely high, as well. In terms of consistency, I’d rank it higher than any of my experiences at Maria & Enzo’s and Enzo’s Hideaway, probably the closest analogs for this level of food and pricing. As for actual cost, Terralina is one of the few places where I found the entrees to be a better value than my appetizers; dessert is about as expensive as anything at Amorette’s Patisserie and just as tasty, as well.

Disney Springs now features over a dozen quality restaurants that you can choose from on any given night to fill your dining needs; there is no doubt this is a tough landscape to compete in. However, even in the crowded Italian food niche, I’d still probably pick Terralina if I were in the mood for pasta over all other available options in the area (and especially over Trattoria al Forno and Il Mulino, your other two “outside the parks” Italian food options). In the grand scheme of all Disney Springs restaurants, Terralina wouldn’t make my top five, but it’s definitely close, and worth a shot on your next visit.

One thought on “Terralina: Not Just Another Italian Restaurant”