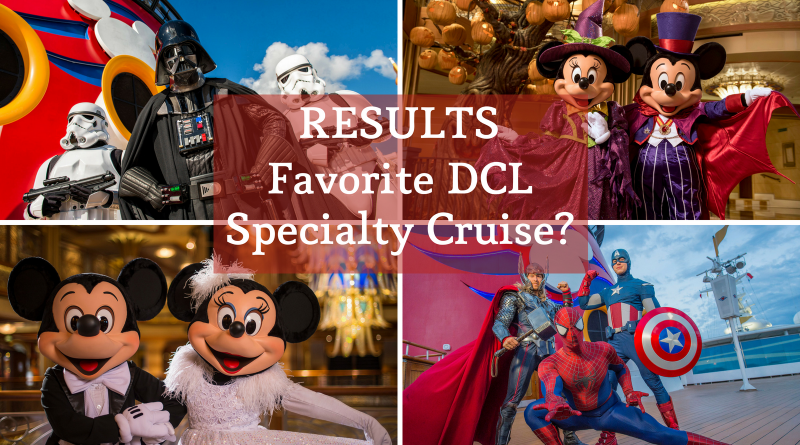 Last week we took our poll to the open seas and asked which is your favorite specialty cruise on Disney Cruise Line? The holidays were nearly tied for your top vote-getters.

In classic Disney tradition, the Christmas cruises begin pretty much as soon as the Halloween decorations come down on the ship. This year the Wonder’s first Very Merrytime cruise departs November 2. November 2. It leaves from Galveston, which might be the worst Christmas cruise ever, but you do you, Santa. Some years, the calendar falls so that you can have both Christmas and New Years onboard, but this year the last Merrytime cruise ends on December 29th. Look for special decorations at Castaway Cay, gingerbread cottages from the ships’ pastry chefs, and photos with Santa. If you’re interested in this itinerary, look for great fares in early December. The cruises that cover the 25th will come at a premium. Definitely read this review from Julia Mascardo to hear more about Merrytime Cruises.

Halloween on the High Seas (all four ships)

You know what would be awesome, doing a Mickey’s Not So Scary Halloween Party AND a Halloween on the High Seas cruise on the same trip? The first Halloween cruise of the season is September 1 on the Dream. All the Halloween cruises on the Magic this year are out of New York City (aside, I’ll be on one – YAY). The Wonder cruises are out of San Diego, with the final one being a 14 night East-bound through the Panama Canal that leaves October 19th. Because Halloween cruises fall squarely during hurricane season, and while most children are out of school, look for great rates and last minute availability on these. On the other hand, you should also be prepared for weather delays or cancelations. Adults and children do wear costumes on these itineraries, especially as you get closer to October 31.

The Fantasy hosts cruise from early January to the first week of March that one whole day dedicated to the Star Wars franchise. Fans can dress up, meet Star Wars characters, and participate in scavenger hunts. To see a run down off the the activities and see Navigators, please read our friends at the DisneyCruiseLineBlog.com. And for even more reading, check out Daisy Lauren‘s Best (Cruise) Ever from last year with a Star Wars Day at Sea. Even though this is just a day out of your cruise, you’ll be sure to run into many fans in costume and lots of souvenirs to remember it by.

Let’s say you want even more fandom? How about doing a Marvel Day at Sea Cruise AND a Star Wars Day at Sea cruise on the same trip? You can because in January, February, and March, the Magic takes this itinerary out of Miami. Bring your costumes and meet characters. There will definitely be movies from the MCU (that’s Marvel Cinematic Universe to you in Hydra) and Marvel-themed entertainment. If you’re worried about enjoying this cruise because you haven’t seen Infinity War yet, read this guide to the event from Savannah Sanders. There’s even more information at the Disney Cruise Line Blog.

So what do you think? Ready to take that special cruise this year or next? Talk about it in the comments and don’t forget to vote in this week’s poll.

I am grateful to the Disney Cruise Line Blog for assistance with the article when the DCL site decided to take its own cruise while I was trying to finish this.