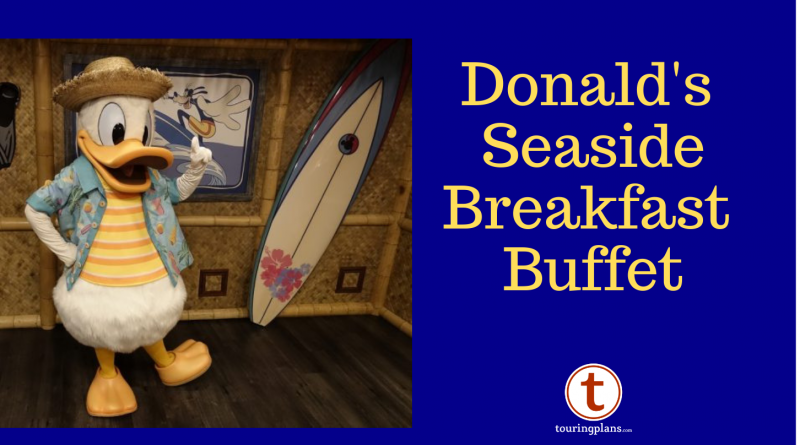 PCH Grill is a restaurant inside Disney’s Paradise Pier Hotel at Disneyland Resort. In this review we’ll take a look at their character breakfast, Donald Duck’s Seaside Breakfast, which has recently added new food and a different set of characters. I feel like PCH Grill is the forgotten Disneyland Resort restaurant. It’s not that the restaurant has a bad reputation, it just doesn’t have any reputation at all. I don’t think that’s a bad thing, I’ve observed reservations to be easily obtainable for PCH Grill, which is great. After arriving outside of the restaurant my group checked in at the podium and waited in the hallway. There was a decent amount of space and seating for the parties that were already checked in. After a few minutes, my party was called and we were brought in to meet Donald. Disney PhotoPass photographers are on hand to take pictures (be warned that Disney will try sell you an expensive photo package later during your meal). Have cameras and autograph books ready because this is the only opportunity to meet Donald. He does not walk around to the tables like the other characters do. The character lineup is small, with only three making their rounds: Minnie, Daisy, and Stitch. PCH Grill isn’t that big, so the characters were able to visit multiple times in the hour that my party dined. Characters gave all diners enough time for everyone to get pictures, autographs, and hugs. I recently reviewed Mickey’s Tales of Adventure Breakfast Buffet at Storytellers Cafe. My main complaint there was how cramped the restaurant is, which left little room to interact with the characters. Thankfully that is not a problem at PCH Grill. There’s plenty of room. I’m happy to report that in addition to the good character interactions, the food offered in the buffet is fantastic. Breakfast staples such as, eggs, sausage, bacon, a cereal bar, and a selection of pastries are all present. An omelette station where you can order custom creations is also offered. The star of the show was the delicious Chilaquiles, which I could not stop eating. I dined with Sarah and Tom Bricker from Disney Tourist Blog, and they both agreed that it and the Banana Caramel French Toast were the best items by far. Drink service fast, used plates were quickly picked up, and overall the service was excellent. Items in the buffet were frequently restocked before they ran out. PCH Grill definitely has a quality over quantity thing going on when it comes to food. There’s not as many different items as the breakfast buffets at Goofy’s Kitchen or Storytellers Cafe, but what PCH Grill does have is very, very good. However, the price is only slightly cheaper that Storytellers (PCH Grill’s character breakfast is $39 for adults and $21 for children, while Storytellers’ is $44 for adults and $26 for children). If you want a larger variety of characters and buffet items, then I would recommend Mickey’s Tales of Adventure Breakfast Buffet at Storytellers Cafe. But either way you can’t go wrong.

Have you eaten at PCH Grill for breakfast? What are your thoughts? Let us know in the comments.