Having endured the recent drought of Priceline Express deals for Disney resorts, I am happy to report that a small batch of deals has dropped this week. (And also that I have decided put off my plan to be cryogenically frozen until far after Galaxy’s Edge fever dies down, when I assume more consistent deals will be released.)

With little deal-deciphering to be done, I’ve spent my time lately keeping up with the pulse of the Internets. So, I assume with that guy doing the thing with the Infinity Thrones, many people will have good reason to be (happy/sad) and want to (celebrate/drown their sorrows) with a quick trip to Disney!

If you can visit in May, there are some very nice deals at All-Star Sports in the $58 – $68 range, as well as several days each of Port Orleans Riverside deals under $112 and Pop Century for $75, which are much better than the many-hundred dollar rooms for Deluxe resorts that have been showing up. (Go away non-deal, deals – I shun thee!)

The only trick is: you may need to play around with your dates to see when deals are available. As is often the case, sometimes deals don’t appear for the exact dates you hope to stay. But, you may find that moving your starting and/or ending date around will open up more possibilities.

For example, when I search for deals one day at a time, here are the ones I found: 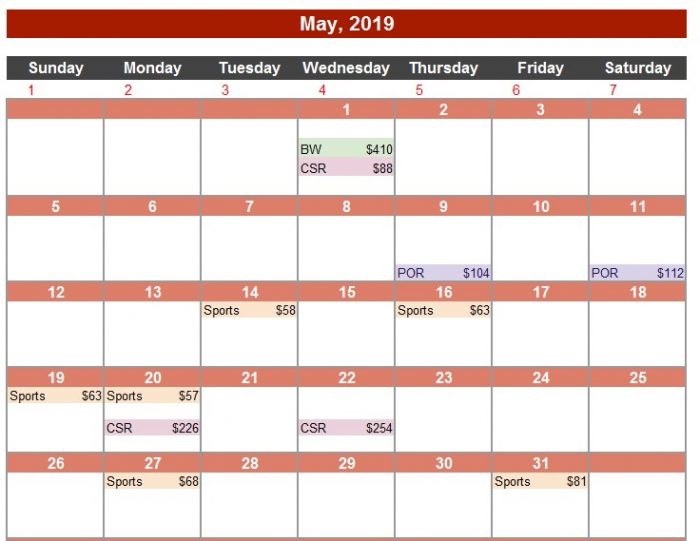 That’s sure not a lot of deals. But, the good news is that if I search for multiple days more deals do appear in those blank spots.

For example, if I happened to search 5/12 to 5/14, Priceline would not show any deals at Disney resorts. But, if I chose to start on 5/13, I could enter an end date all the way up to 5/17 and All-Star Sports deals would appear.

In fact, even though there were no single-day deals for Pop Century, if you search for multiple days some appear in this new batch! Here’s what I find when I try out various possible search dates designed to find as many days with deals as possible: 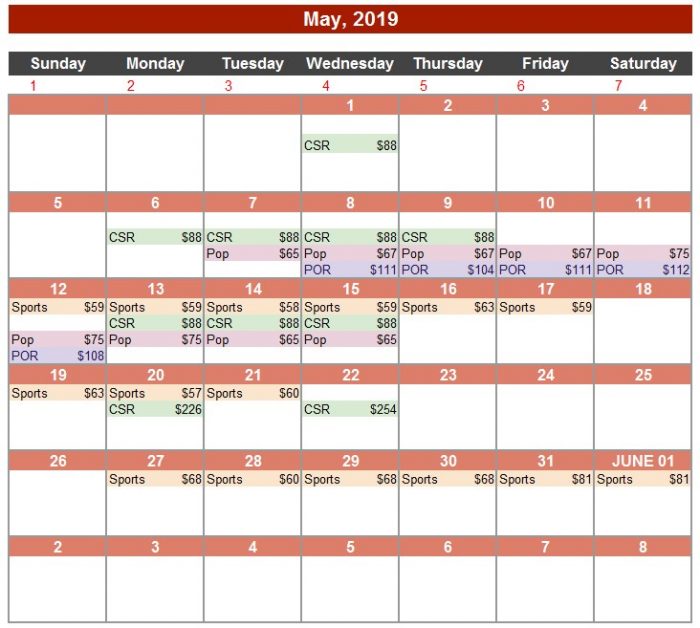 (Note: this calendar above was updated with additional deals that appeared overnight on May 2nd. Things keep changing folks, so check often if you are in the market!)

If you are nerdy enough to appreciate the nitty gritty of these overlapping dates, here are some tables that show how the pricing changes and availability opens as the start and end dates move around. 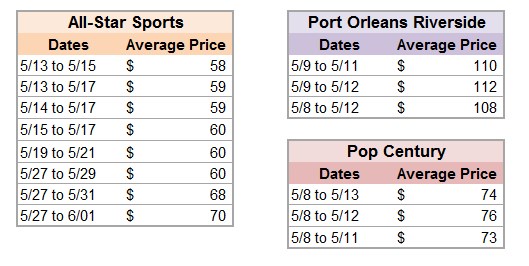 I hope you find some deals in here that help you plan a fun quick trip – if you’ve found any other interesting deals, let us know in the comments!

4 thoughts on “Priceline Deals for May”