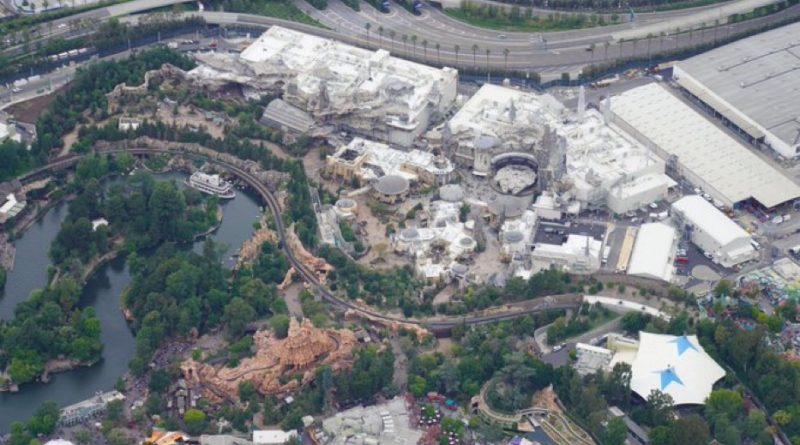 This week’s SATURDAY SIX takes a (3,000 foot) look at the Disneyland Resort!  Regular readers of the SAT 6 know of the hard work and dedication that go into the art of theme park blogging. A group of dedicated men and women who tirelessly put in their blood, sweat, and tears (in Florida, it’s mostly sweat) in order to deliver us coverage on the theme parks we all love. However, one of these unsung heroes soars high above the rest, literally.  @bioreconstruct is well known for his seemingly daily helicopter flights in Florida, delivering amazing pictures with unique pictures of Walt Disney World and the Universal Orlando Resort, but this week he made a special trip out to California to get aerials over DISNEYLAND.

So this week we are going to take a 3,000 foot look down at what’s going on at the Disneyland Resort, but that’s not all. Bio was also kind enough to get some great photos while touring the parks on foot, so we’ll pepper those in as well. Let’s start off our tour with a look at…

One of the benefits of WDW’s “blessing of size” is the sheer amount of hotels we have in Florida. No other theme park resort will ever compete with the unique offerings Disney has with a lineup including the Animal Kingdom Lodge, Port Orleans, Art of Animation, and The Poly. In comparison, the Disneyland Resort has a total of three onsite hotels: The Disneyland Hotel, Paradise Pier, and the Grand Californian. What Disneyland does offer is that all of their hotels are close to the parks. REAL close. In fact, the Grand Californian has a dedicated entrance directly into Disney California Adventure.

For those not staying onsite or at one of the nearby “good neighbor” hotels that are within walking distance, Disneyland guests park at a structure similar to the design Universal uses in Florida. This garage has been recently expanded, with the new section opening soon.

Heading into the parks. Let’s first check out DCA. First, an overview of the entire area. Reminder that for most of these pictures, you can click on them to zoom in for even more details.

The Pixar Pier section of DCA is on the right hand side on this photo.

Aerial view of Pixar Pier, including the Pixar Pal-A-Around near the center (formerly Mickey’s Fun Wheel.)

Here is a ground level view of the current construction of the Emotional Whirlwind attraction.

While Pixar Pier official opened last year, attractions are still being added. Aside from the Emotional Whirlwind under construction, Jessie’s Critter Carousel recently opened in April.

Formerly King Triton’s Carousel of the Sea, the attraction has been re-themed, filled with cute characters. The ride is now based around Jessie and “Woody’s Roundup” from Pixar’s Toy Story 2.

The Pixar Play Games are still one of my favorite parts of DCA. The quality of games and prizes are somehow even better than the games featured in Universal’s Springfield USA.

How can you not love a game based around Pixar’s A Bug’s Life?!

For animation fans, there are a lot of great references in Pixar Pier. The merchandise store Knick’s Knacks is based around the short film Knick Knack which Pixar made over a half decade before the original Toy Story.

Bing Bong’s Sweet Stuff featuring a popular character from Inside Out.

Another character from Inside Out, Anger, is used for this quick service location.

We have done a previous SAT 6 on Disneyland Snacks, and as a Floridian I can’t help but be jealous by the amount of various churro flavors they offer. Señor Buzz Churros, based around a great moment in Toy Story 3, features an appropriately themed Caliente Churro.

Is there anyone out there who doesn’t love Cars Land in DCA? One of the greatest lands built in theme park history.

The rock work in Radiator Springs at Cars Land is just incredible, and always beautiful to look at.

This aerial photo shows the relationship of Cars Land and the area where DCA will be expanding its Marvel presence. Cars Land is on the top right of the photo while Guardians of the Galaxy – Mission: Breakout! is almost directly in the center of the picture. If you zoom in, the arrow is pointing out two different sets of ride vehicles right next to each other on Radiator Springs Racers.

Overhead view of Guardians of the Galaxy – Mission: Breakout! (formerly the Tower of Terror).

A ground-level view of the GOTG building.

A golden statue of The Collector – Taneleer Tivan – outside Mission: Breakout!

The overall story of Mission: Breakout is that guests are allowed to see the Tivian Collection, but even before you get into the building there are collected specimens outside.

Inside the building there are references to the Guardians of the Galaxy films, Disney characters, and more.

There is a wonderful Rocket Raccoon audio animatronic in the attraction.

Like the Amazing Adventures of Spider-Man attraction at Universal’s Marvel Superhero Island, there is a lot of fun signage throughout Mission: Breakout!

As a person who loves theme park merchandise, one of my favorite Disney souvenirs is the plush in the Mission: Breakout! gift shop made to look like exhibits in the Tivian Collection.

This overhead view shows Mission: Breakout on the far right, and the land being developed for the upcoming Marvel expansion on the left.

Ground level view of the area.

In a nice touch, construction walls in the area are themed to Stark Industries.

As we leave Disney California Adventure, let’s check out an aerial showing just how close the park is to Disneyland. Here we have DCA on the right, Disneyland on the left, and the esplanade in the middle.

The park which started them all.

This shot has Main Street USA in the center of the photo.

Right now Disneyland’s Sleeping Beauty Castle is under refurbishment, so there are themed scrims surrounding it.

This aerial photo shows Main Street USA on the left, and Tomorrowland on the right.

This aerial gives a good look at Tomorrowland, and includes the monorails for those who zoom in.

Incredible view of the Haunted Mansion in the center of this aerial. Seeing everything from this perspective helps give a better understanding of the work which goes into the “show” for us guests.

As for the Disneyland railroad, during one section of the ride the train goes into a covered section and guests get to look at dioramas.

The dinosaur section should seem familiar to any WDW fans who miss Epcot’s Universe of Energy Pavilion. These dinos were originally seen in the 1964/65 World’s Fair (the Epcot versions were copies).

Another diorama that guests get to enjoy is one based around the Grand Canyon.

You may be thinking to yourself, “this doesn’t seem to be very fair to Florida,” AND YOU’D BE RIGHT!

Similar to the WDW Railroad, the Disneyland version has sections based around Native Americans.

In preparation for the upcoming Star Wars: Galaxy’s Edge, major changes had to made to the Disneyland Railroad, including the introduction of the “first left turn.” Instead of just circling the park in a clockwise manner, the train now goes to the left in order to take guests over a trestle near Galaxy’s Edge.

Here is a view from the ground showing the trestle. In less than a month, guests will be going through this area into Star Wars: Galaxy’s Edge.

Here is another area that will allow guests into Star Wars: Galaxy’s Edge.

This aerial shows were both of those Galaxy’s Edge entrances are located.

Which leads us to….

This shot is from the opposite side as the one above. On the top left section of the photo you can see the trestle in which the Disneyland Railroad travels over. Underneath that is the area which will lead guests into the land.

Aerial views of the Black Spire Outpost section of Galaxy’s Edge. The main feature of this area will be the Millennium Falcon: Smuggler’s Run attraction.

Aerial view of the forest area of Galaxy’s Edge which will be home to the Rise of the Resistance attraction.

Rise of the Resistance is not opening with Galaxy’s Edge later this month in Disneyland or on August 29 when Galaxy’s Edge opens in Florida, but looks to be Disney’s most ambitious attraction in history. If you zoom in, you’ll see what looks like a spaceship in the caves. The green roofed structures in the dead center of the photo appear to be the “Resistance Supply” area. Guests will be exiting the attraction via the large structure on the left, leading them directly to the shops selling Resistance-themed gear.

Aerial showing a different angle of the area directly in front of the Rise of the Resistance attraction. The photo shows several spaceships. How great does all this look?! WOW!

We just couldn’t leave Disneyland without a quick mention of some of the current pizza offerings.

So there you have it: The SATURDAY SIX Takes a 3,000 Foot Look at the Disneyland Resort! See you next weekend for the latest installment of the SATURDAY SIX, where we’ll look at something fun from the world of Disney and Universal. If you enjoyed yourself, be sure to check out The Magic, The Memories, and Merch! articles, or, for your listening pleasure, check out the E-Ticket Report podcast. You can also follow Your Humble Author on Twitter (@derekburgan).

Special Thanks to The bio-est of all reconstructs @bioreconstruct, the SAT SIX Fun Squad of Parkscope Joe and Nick, and Hermione Granger’s tutor Megan Stump for their invaluable assistance with this article. The SAT SIX is inspired each week by goofballs Aengus Mackenzie and LitemAndHyde and you Potterheads will  enjoy Meg’s other blog work over at the Central Florida Slug Club. 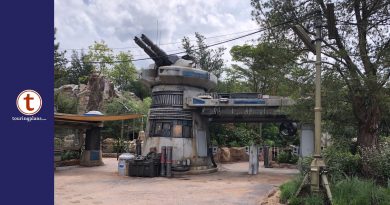 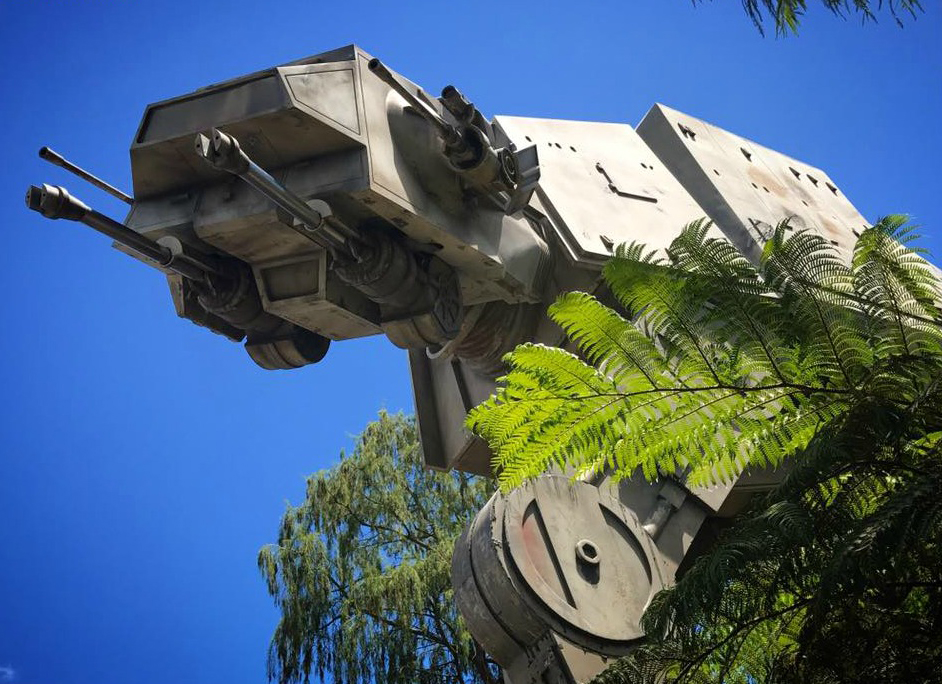 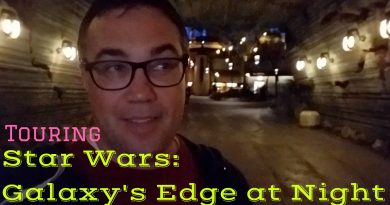 3 thoughts on “The SATURDAY SIX Takes a 3,000 Foot View at the DISNEYLAND Resort (including Star Wars: Galaxy’s Edge)”