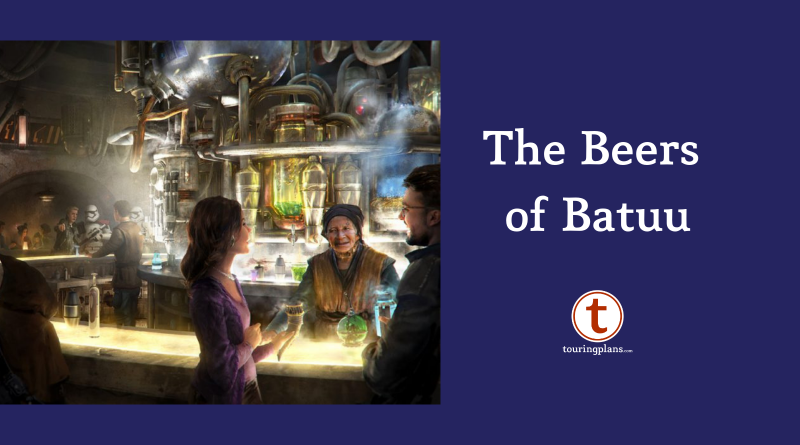 Craft brews continue to be a popular trend, and Disney has teamed up with some excellent breweries to provide Galaxy’s Edge-specific brews on tap at Oga’s Cantina.

(ABV 5.0%) Golden Lager, Blue Point Brewing Co., Patchogue, NY
Here’s what Blue Point has to say about their founding:
Our story started in 1998 with two friends who noticed a lack of fresh beer on Long Island and wanted to lower their bar tabs. We built a brewery on Long Island’s South Shore in Patchogue, a tough and humble coastal town. The first beer we ever brewed was Toasted Lager, an American Amber Lager named for the original direct-fire brick kettle used to toast six specialty malts for a rich and unique flavor. Toasted Lager quickly became a beer New Yorkers could stand behind, taking home two World Beer Cup gold medals and earning a reputation as a beer you could enjoy every day.

Still true to their New York roots, Blue Point is based in the village of Patchogue in New York. Their innovative beers are “brewed with ingredients like local oyster shells, beach plums, and seaweed”.

(ABV 4.5%) Hefeweizen, Ballast Point Brewing Co., San Diego, CA
Here’s what Ballast Point Brewing Co. says about their history:
We started out in 1996 as a small group of San Diego home brewers who simply wanted to make a better beer. In our exploration, we became obsessed with ingredients—tinkering, testing and tasting to find the perfect balance of taste and aroma. That adventurous spirit leads to award-winning beers in classic and unique styles while challenging our own tastes and expanding yours.

Many regulars at Disneyland may already be familiar with this brand, as Ballast Point operates a restaurant and brewery in Downtown Disney.

(ABV 6.0%) IPA, Sierra Nevada Brewing Co., Chico, CA
If you need a backstory that has the vibe of scoundrels living on the edge, look no further than Sierra Nevada Brewing Co.:
In 1969, Ken buys his first homebrewing kit (and hides it from his mom–he was a teenager).
Since then, Sierra Nevada Brewing Co. has gone from brewing their first five barrels of stout using recycled dairy equipment to producing a wide range of year-round, seasonal, and specialty brews.
Beer aficionados — which of these brews sounds like your kind of speed as you travel through Galaxy’s Edge? Let us know in the comments.