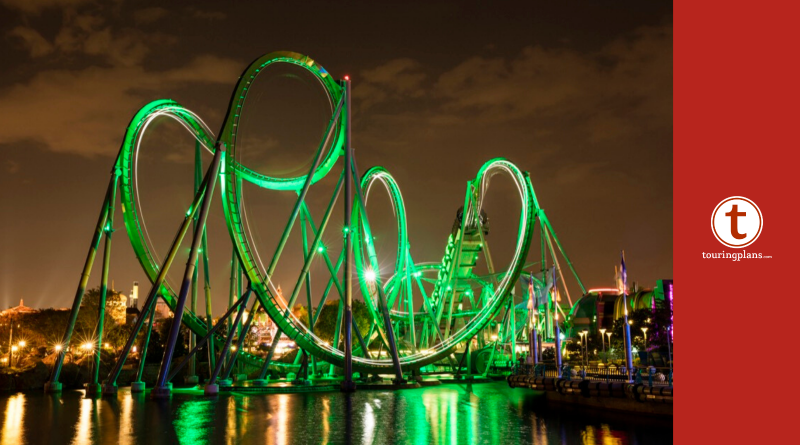 Today in Getting to Know Universal, we are covering the ins and outs of Island of Adventure’s The Incredible Hulk Coaster. Hulk is located in Marvel Super Hero Island and opened with the park as a super headliner in 1999. With its launch tunnel, green track, and massive cobra roll above the lagoon, the Hulk is one of the most iconic attractions in the world.

Designed by Bolliger and Mabillard (B&M), a Swiss coaster design firm best known for its inverted and hyper coasters, the Hulk and debuted as their first launched coaster. Coaster fans around the world flock to this coaster for over 20 years.

First things first, The Incredible Hulk Coaster requires guests to store all items in a locker, including bags, refillable cups, cellphones, keys, wands, and wallets. Lockers are located to the right approaching the attraction, across from the entrance. All riders must proceed through a metal detector prior to riding; see a Team Member for assistance.

General Thaddeus Ross is conducting experiments on civilians after the accidental creation of Bruce Banner’s Hulk. The experiments involve exposing subjects to gamma radiation to see if everyone has a Hulk. The queue winds itself through the test facility and up a ramp towards the launching platform. Once at the platform guests are assigned rows and board the coaster trains. Upon a final systems check the trains are loaded into the Gamma Core, where Bruce Banner first unleashed his Hulk.

Just like Bruce, guests also “Hulk out” and launch 40 mph out of the core and into a diving zero-g roll to the water. Guests then invert an additional three times, including an iconic cobra roll, over the Islands of Adventure lagoon before roaring behind the test facility. When all is said and done guests will have gone through seven inversions at speeds up to 67 mph, making Hulk the second-fastest ride in Orlando.

Hulk closed in September 2015 for a massive year-long refurbishment. Hulk’s coaster track was completely replaced, a new entrance plaza was built, the indoor queue was reworked to better accommodate Universal Express and Single Rider Lines, new lockers were installed, and new trains were commissioned featuring lighting. Also, a new onboard soundtrack was introduced, provided by Fall Out Boy’s Patrick Stump.

The Incredible Hulk Coaster proves the motto “What You See Is What You Get”: a massive, inverting, launched, steel roller coaster. This coaster is exhilarating, from the anticipation of the launch to seeing all of Islands rush by. But be warned, Hulk also eats unprepared adults for breakfast and is one of the most intense coasters in Florida. Thanks to its iconic design and euphoric ride experience Hulk remains one of the most popular and iconic rides in the world.

That being said, there are some ways the design does not hold up to other, modern coasters. The over-the-shoulder restraint system is clunky and awkward, sometimes causing “headbanging” on the restraints during transitions. The layout isn’t as smooth as Hagrid nor are the hills and inversions as crazy as Steel Vengeance in Cedar Point. What you get is a very solid roller coaster that only suffers due to old design conventions. For me, this coaster ranks fourth in Orlando for me behind Mako at SeaWorld, Hagrid, and Manta at SeaWorld.

If Hogsmeade is the top priority, visit Hagrid’s Magical Creature Motorbike Adventure, Harry Potter and the Forbidden Journey, and Skull Island: Reign of Kong first then proceed to Hulk.

Universal Express Pass and Single Rider Line are available at this attraction.

One thought on “Getting to Know Universal – The Incredible Hulk Coaster”