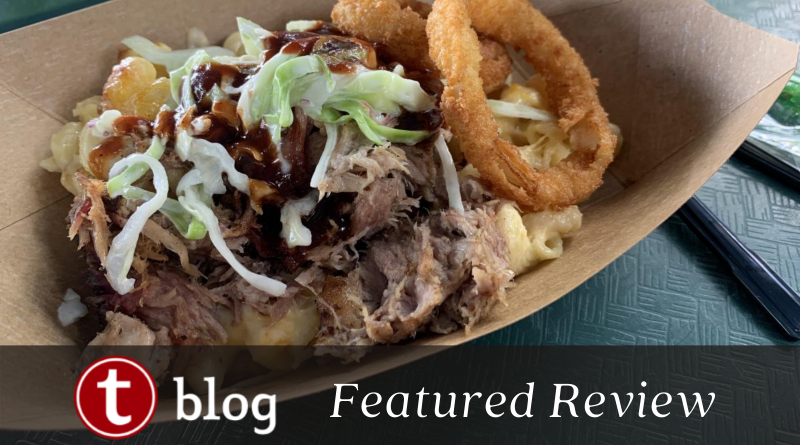 Flame Tree BBQ is one of the few quick service restaurants with a full menu at Disney’s Animal Kingdom theme park. Located near the center of the park, across from Discovery Trading Company, the menu is, not surprisingly, heavily focused on barbecued meats. 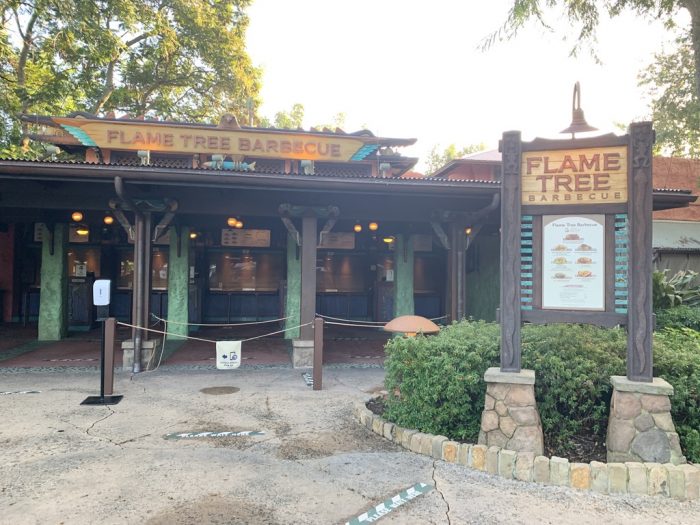 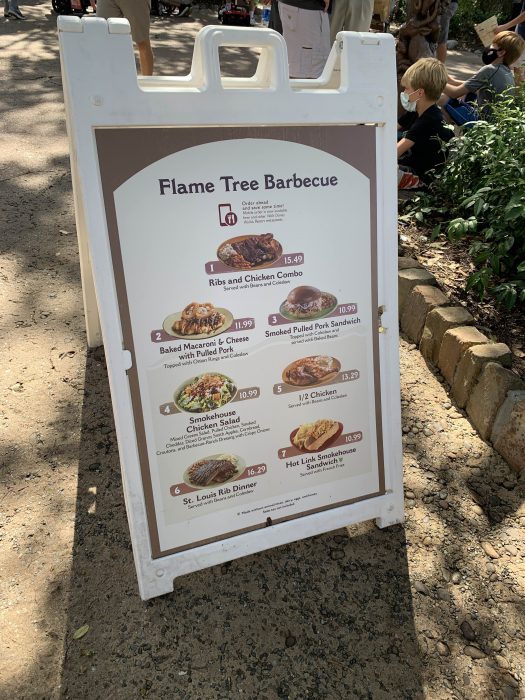 During the COVID era, food ordering is done almost exclusively via mobile order. You can initiate this directly through the My Disney Experience app on your mobile device or by scanning a QR code that’s posted on signage near the restaurant. 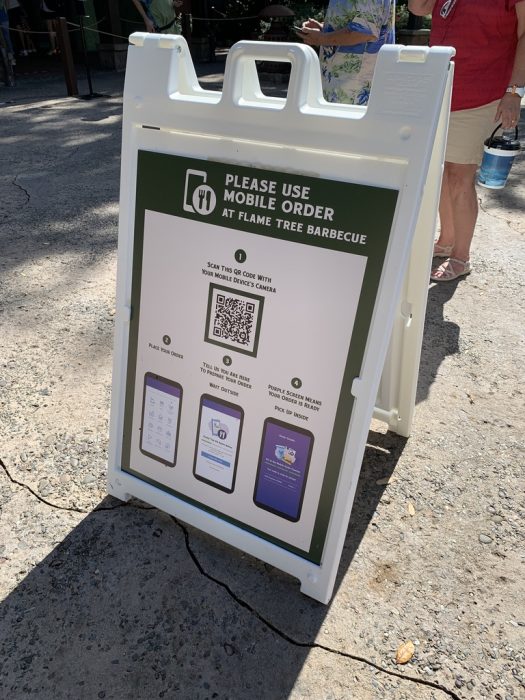 I recently tried the two dishes based on pulled pork. The pork itself is slightly drier than I might like, though if I had to choose between too dry and and too fatty, I’d definitely opt for the former. The dishes work to moisten the meat with the addition of a nicely tangy BBQ sauce and either the creamy coleslaw topping or the creamy mac & cheese base. While the pork was good enough, the mac & cheese was a true standout. There’s no hint of pre-made boxed mac here; it’s a real hearty homemade recipe with a balanced mixed of cheddar and parmesan flavors and an al dente bite. While plain mac & cheese is not officially on the menu, vegetarians would do well by asking to have this served without the meat topping.

My first beverage choice here was the mandarin orange lemonade, which tastes like standard lemonade and, in my opinion was not worth the $0.50 premium pricing over the standard fountain drinks.

I also tried the Halloween holiday special drink – Spooky apple punch. Now that they’re in Christmas mode, there’s a winter holiday version of a similar drink, but with a Mickey-shaped glow cube rather than a skeleton glow cube. It tasted like sweet, with no real discernible flavor other than sweet. I’m sure my impression was exacerbated by the accompanying sugar-coated straw and sugared cup rim, which tasted like, you guessed it, sweet. Not that any of this is necessarily a bad thing. 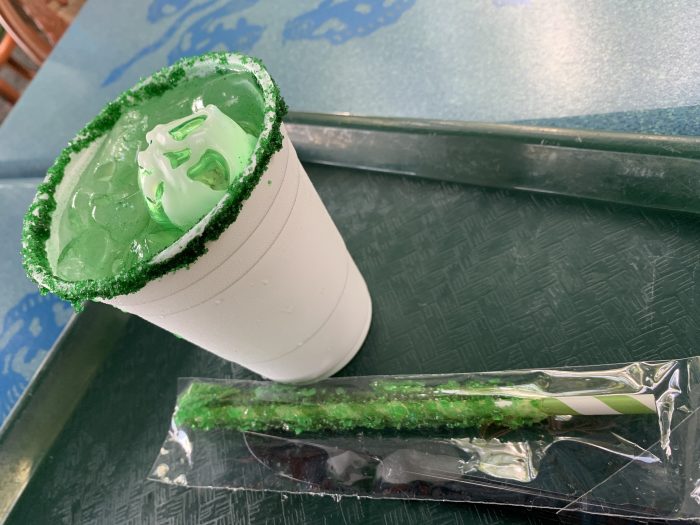 A word to the wise if you’re in the mood for a sugar rush to power you through your Animal Kingdom touring, place the straw into the drink with candied side down into the liquid. 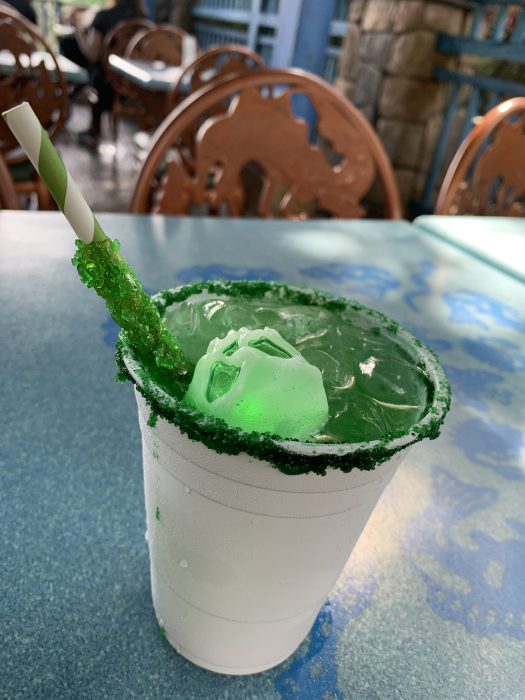 Overall, Flame Tree is a reliable spot, particularly for meat eaters. There is outdoor seating scattered in several areas around the pickup counter. The best spots are behind the restaurant, close to the water where there are lovely places to catch the character cavalcade boats that power through the park waterways during the middle part of the day. 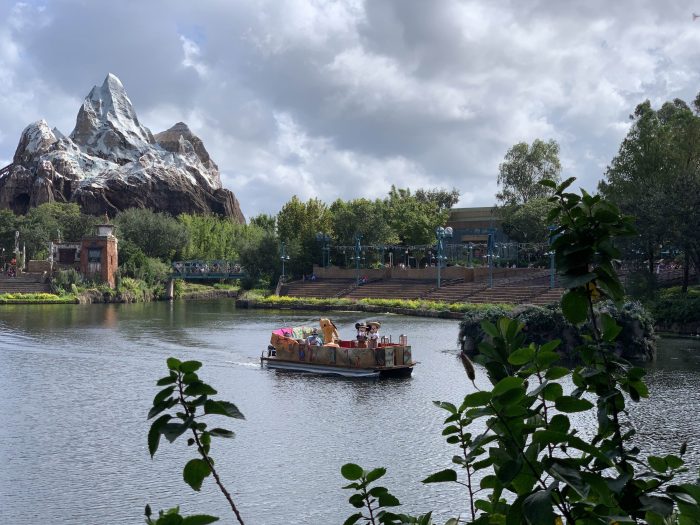 For more information on dining at Walt Disney World, check out our full menu listings and restaurant overviews.