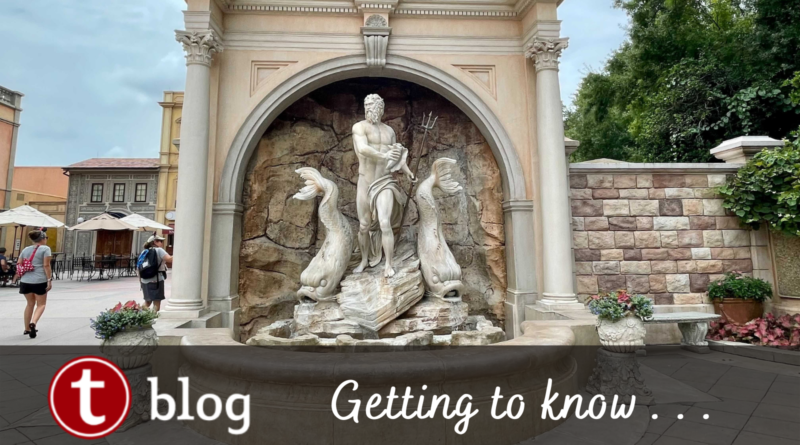 It’s easy to enjoy strolling around the amazing sunlit piazza in the Italy Pavilion at EPCOT without realizing all the details the Imagineers have built here. From the exquisite hand-painted Sicilian donkey cart (Carretto Siciliano) to the Venetian bell tower, every attempt has been made to transport you to the Bel Paese or “beautiful country.”

The centerpiece of the piazza is an impressive fountain. And there’s a lot more to this remarkable work of art than meets the eye. Just for fun, here’s all you need to know to amaze and impress your friends with facts about the fountain. 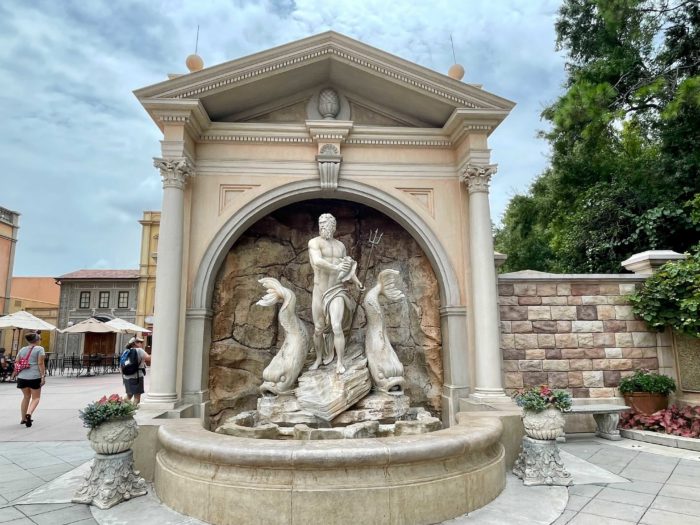 Q: I’ve read that this a replica of the famous Trevi fountain in Rome; is that right?

A: Not really. While the famous fountain served as an inspiration, this is not a duplicate or a replica. With this fountain, the Imagineers were attempting to evoke the spirit of the works of an Italian sculptor who created five fountains in Rome, Gian Lorenzo Bernini. Believe it or not, the Trevi (which means three-ways, so named because it was built at the junction of three roads) was designed by someone with no prior architectural experience: poet and philosopher Nicola Salvi.

Q: Is the central figure Neptune, Poseidon, or Triton?

A: Simple answer: it’s Neptune. According to Disney, the name of the fountain is Fontana Di Nettuno – Italian for “The Fountain of Neptune.” Neptune was the Roman god of fresh water, streams, lakes and rivers. But here’s the secret info that’s guaranteed to make you a whiz at EPCOT trivia. The main figure in the Trevi fountain is the Greek sea God Oceanus, neither Poseidon nor Neptune. And flanking Oceanus in the Trevi are sea horses and several figures representing – wait for it – “Tritons” who are half men and half mermen. So, the depiction of King Triton in the Little Mermaid is spot on! 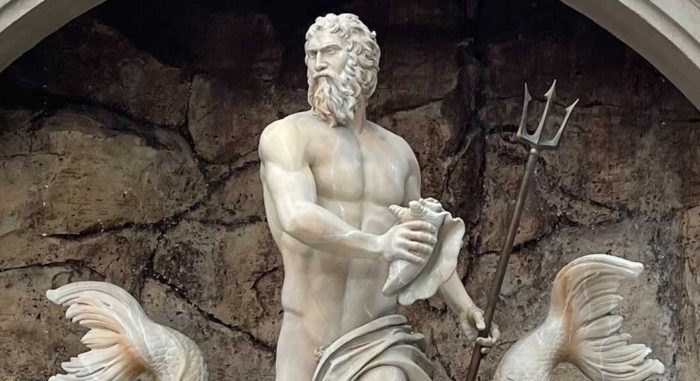 Q: I know why Neptune is holding a trident, but why the conch shell, too?

A: This is a little convoluted: over time, Neptune (who, you’ll recall, was the god of fresh water) became associated with the Greek god of the sea, Poseidon, and acquired his relationship with the saltwater oceans. Poseidon was the god of the sea, storms, earthquakes–and horses! Poseidon held a trident, a traditional fishing spear, which he used his to start earthquakes. His son, Triton, sometimes had a trident in ancient depictions, but also had a conch shell. Triton would blow the shell (like a trumpet), and the seas would obey his commands.

So, in this fountain, Neptune has a trident AND a conch shell – again capturing the spirit of Roman sculptures, not literally replicating any one artist’s work.

Q: Are those supposed to be dolphins? They look angry and they don’t look like dolphins.

A: Yup, those are dolphins, but not the dolphins we know and love. That’s because they aren’t the mammals we call dolphins or Delphinus delphis. They’re true fish, mahi-mahi to be exact, which are also called dolphinfish or Coryphaena hippurus. The dolphins in the EPCOT fountain look a lot like those in the Bernini fountain Fontana del Tritone in Rome. And since the ancient artists often depicted Neptune and Triton riding dolphins, standing on dolphins or with dolphins surrounding them, the Imagineers included them here as well.

Q: What is the tradition about making wishes in the Trevi fountain and is it the same here?

While Disney World does not guarantee the same results for coins tossed into the Fontana Di Nettuno, it’s worth a couple coins to find out, don’t you agree? (Of course, if you’re already in love and/or married, maybe toss only one coin in the fountain and save the rest to buy a limoncello from the donkey cart.)

For an in-depth and fascinating photo journalistic article about EPCOT’s fountain, see “Neptune at EPCOT and his relatives in Rome” here: https://www.yesterland.com/neptune.html

But then be sure to come back here for more news and updates!

Are you a fan of this fountain? Curious about other details around Walt Disney World? Let us know what you think in the comments.

2 thoughts on “A Reason to Stroll and Linger: The Fountain in the Italy Pavilion of EPCOT”