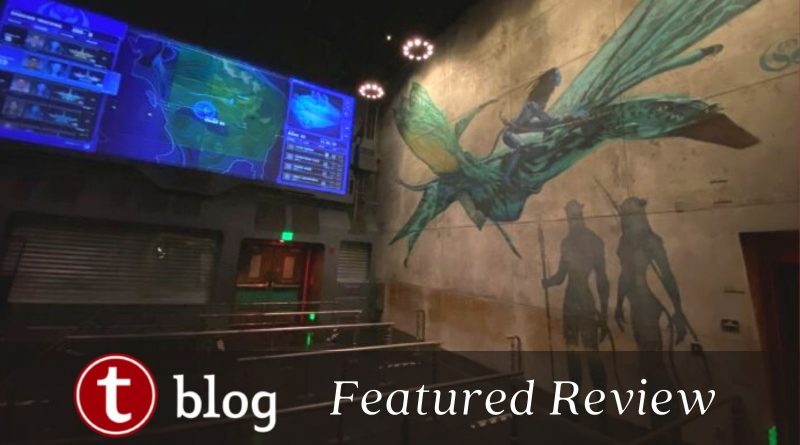 I recently wrote a review of Rise of the Resistance from a ride wimp’s perspective, and heard from our readers that they would appreciate reviews of other attractions. So let’s talk about Avatar – Flight of Passage. I will do all I can to avoid any major spoilers and will note any moments that could be considered a spoiler. My hope is to help you understand what to expect, and share some tips on how I was able to experience this attraction.

Full disclosure: I have only been on Flight of Passage once. Well I guess you could say one and a half times. About halfway through my first experience it paused and completely reset. After a few minutes the Cast Members checked in on everyone and then the attraction started over completely.

Flight of Passage is a simulator style attraction. Although this style of attraction is popular at Walt Disney World, the way it is presented at Flight of Passage is quite different. The queue could easily be claimed as the most detailed and thematic queue at Walt Disney World. There is a “chicken exit” so if you decide not to ride the attraction, so you can still enjoy the impressive queue.

The purpose of Flight of Passage is to give guests an opportunity to experience what it is like to fly on a Banshee, which is a large dragon-like creature in the Avatar film. The Na’vi form a connection with their Banshee. Humans are not able to do so in the same way so technology was “developed” to allow humans to connect with an Avatar and experience what it is like to ride a Banshee. Guests board an individual ride vehicle that many say resembles a sleek motorcycle.

There are two pre-show areas before entering the room where you are seated on the ride vehicle.

When I entered the theater, where the attraction actually takes place, I really began to get nervous. The theater is a multi-story screen and there are multiple rows of the ride vehicles. Each of these rows are on their own platform. When getting onto the ride vehicle I had a mix of excitement and anxiousness. Overall being on the vehicle felt fairly comfortable. But you are facing downward at an angle, and there is a harness that comes down to the small of your back. There really is no other ride vehicle like it at Walt Disney World.

I will now describe what it is like during the ride itself.

When the attraction began it wasn’t too intense, although the initial “launch” and first swoop down in the first 10 seconds are thrilling. I remember there being a few small swoops and dips after that. It was quite exhilarating without being too much. After about 45 seconds the motion of the attraction and the action on screen really pick up.

The swooping and dipping of the ride platform intensified as did the images on the massive screen in front of us. At this point I started to become overwhelmed. I am sensitive to intense sound and intense motion. Thankfully the sound was quite pleasant, and beautiful. The motion was very smooth, but it did grow in intensity about 45 seconds in. I remember letting out a few screams – a mixture of fear and excitement. At this point I could no longer handle watching the screen, and so I watched the ride vehicle instead.

Anytime I become overwhelmed on a thrilling attraction my method is to watch the ride vehicle or look down at my feet. This grounds me and brings me back to a less stimulating experience. On Flight of Passage watching the ride vehicle itself was less effective because of the way the screen wraps around, so I turned my head even more to the side and was able to watch the ride platform. Wow – the platform was so impressive. I had never seen ride mechanics like it before. I was able to watch the platform rise and fall.

After about two minutes the action slows down for a few seconds during a beautiful scene. I was able to return my view to the screen at this point and catch my breath for about 30 seconds. Then the action picks back up for another minute and a half. The second half did not feel as intense to me as the first half did, but I still ended up averting my eyes back to the platform for most of it.

I am glad I experienced Flight of Passage. It is not scary, but it is thrilling and intense. My motion sensitivity was definitely impacted and I needed to be outside in the fresh air for about an hour afterwards to come back down from the rush. I have not ridden Flight of Passage since that first visit, and that was when the attraction first opened. Once my son is tall enough to go on it and we can all go together I will ride it again. But, as wonderful and impressive as the attraction is, it took a lot for me to get through it, so I am in no hurry to board a Banshee again.

Are you a fellow ride wimp? Have you given Flight of Passage a go? What did you think?