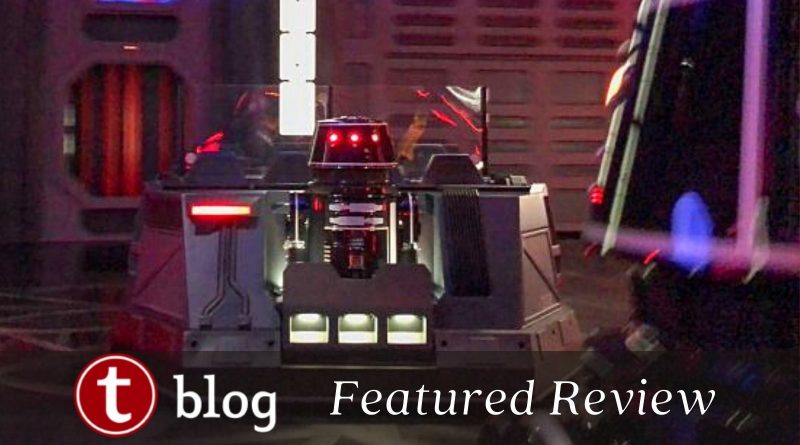 It’s okay to be a theme park fan and have an aversion to thrill rides. Every so often us ride wimps get the gumption to ride an attraction that is considered thrilling. If you’re anything like me, it’s an entire process to get there. This weekend my husband and I finally secured a Boarding Group for Rise of the Resistance. There was only one problem, we would need to ride separately in order for one of us to stay with our son. Here’s how I, a ride wimp, survived Rise of the Resistance on my own, and why I think everyone should try it once.

But before I begin I have to send a huge THANK YOU to those on Twitter who walked me through what the ride would be like and gave me so much encouragement. I received so many great pep talks and so many tips that helped prepare me.

This overview of the attraction will contain a general description of the experience from my perspective. I consider myself to be a sensitive person. Loud noises and thrilling experiences can overwhelm me. I’ll keep this general as to avoid any spoilers as much as possible.

If you’re sensitive to sounds, like me, you will be bombarded with them at the peak of the attraction’s action. I did not have ear plugs and I did okay, but it did take a lot of self reassurance and deep breaths. Ear plugs or headphones may be a good option for those that wish to have a tool to tone down the sound, or as a comfort measure.

If you are sensitive to lights and flashes there are a few moments that may cause some discomfort. The bulk of the ride is dark so the few light effects that occur are that much more dramatic.

The actual motion of the ride starts off pretty subtle. There are multiple ride sequences, starting with a fairly mild experience in an “escape shuttle.” Then later in the experience you board a different type of ride vehicle, the bulk of the experience takes place in this ride vehicle. It is trackless and most of the movement is very fast.

I am going to go into some detail about the ride’s movement and two thrilling moments. If you wish to be completely surprised you may want to board an escape pod now and read some of our other wonderful blog posts.

There are no big drops or twists, but the vehicle does move about quickly and changes direction often. The ride itself is very smooth. There are some portions in which the vehicle moves backwards, and that is an issue for me. I turned around and faced the backward motion which helped, but may have annoyed my fellow passengers.

Before I rode the attraction others described it to me as a “more intense version of Mickey and Minnie’s Runaway Railway.” This is a good, simple way of describing it. There are two moments that are somewhat thrilling, a lift up and a lift down. Both are elevator-style so your vehicle does not tilt forward or backward. The lift up really got me because it was not obvious that it was about to happen.

If you want a clue as to when the lift up will happen, it is the immediate moment after you see Finn.

The drop down was not as bad for me because it felt obvious. The ride vehicle pulls into a bay and you can see locks on the platform to hold the vehicle into place. You might be able to hear them click too. After the short drop down, which is over in three seconds, there is a short simulator style segment. I decided not to watch the screen for this part and instead looked at the floor of the vehicle. This segment felt a little more intense than the simulator experience at Star Tours: The Adventure Continues. I will ride again eventually and will do my best to watch more of this segment.

The experience ends outside. I love that this attraction incorporates so many different elements, including two moments that take place outside. I felt a great sense of accomplishment, not just for conquering the attraction by myself, but because of the awesome storyline. I am glad Disney created such an immersive Star Wars attraction that is still accessible for many guests.

Be sure to visit our Rise of the Resistance page if you want to review every last detail about the attraction as well as advice on how to tour Disney’s Hollywood Studios based on whether or not you get a 7:00 a.m. boarding group.

I’d love to know if this kind of review and perspective is helpful to you. Let us know in the comments.