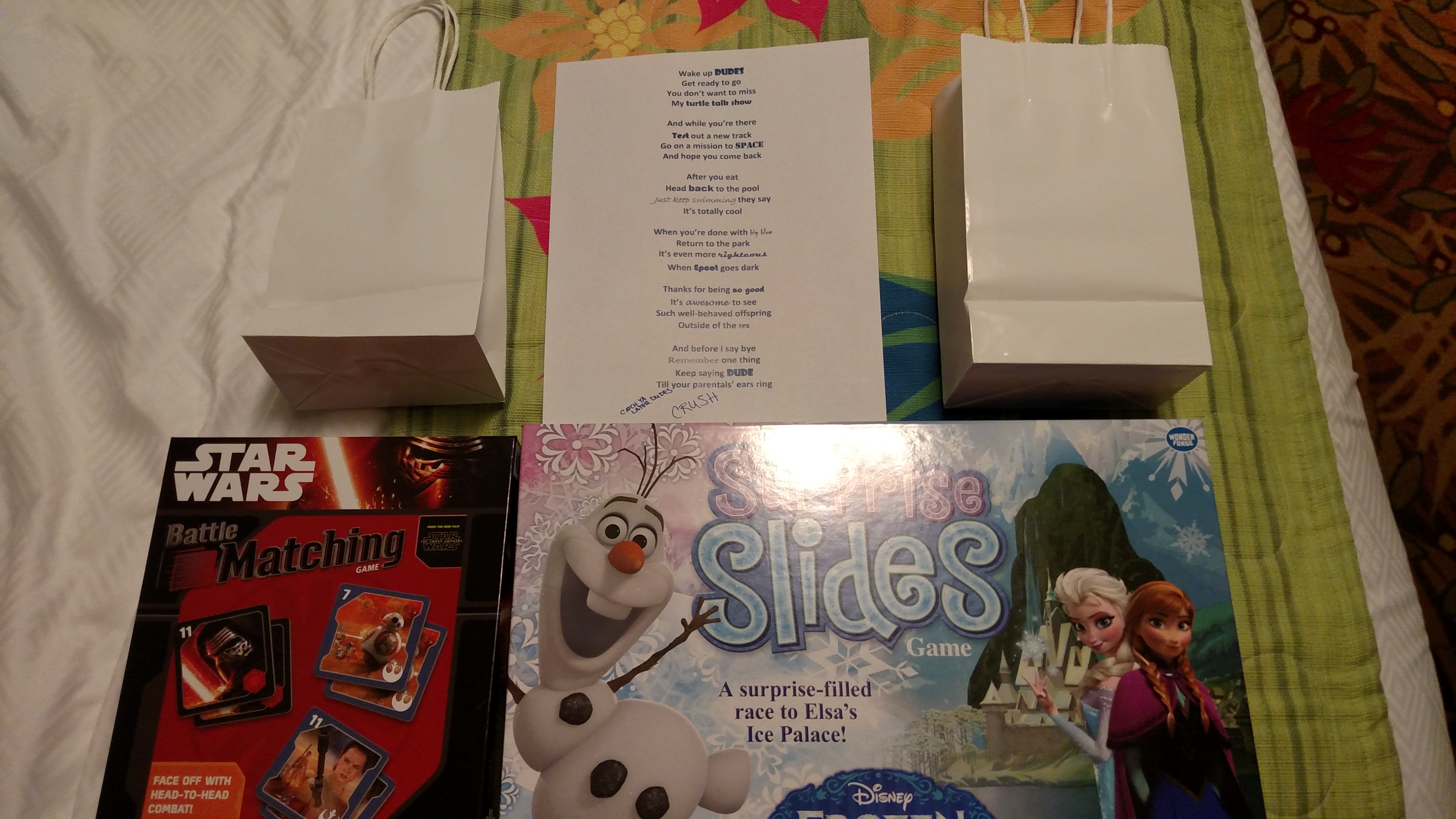 Imagine with me, if you will, a parent’s paradise in Walt Disney World. No, not that one where you ditch the kids and head over to the Adventurers Club at Pleasure Island (RIP). The other one. The one where the kids wake up bright and early, brimming with excitement to start their day. No whining about getting up early for rope drop, no nagging for that $16 autograph pen from the gift shop, and absolutely no fighting between siblings. Sound too good to be true? Maybe. But it certainly doesn’t hurt to aim high! So let’s talk about how Tinker Bell gifts can not only encourage good behavior but also add an extra touch of Disney magic while simultaneously helping you save money on souvenirs.

For those who haven’t heard of them, Tinker Bell gifts are small presents you leave in the room for the kids in your group. They can be left overnight for discovery in the morning (like a Disney version of Santa), or if you can find a way to sneak back into the room without the kids noticing, you can leave them as a surprise for when they return from the parks. Typically, the gifts are accompanied by a note explaining the gift and who gave it.

Though they are called Tinker Bell gifts by most people, if you think the child(ren) in your party would be more excited about a letter from Rey (Star Wars) thanking them for their help with the Resistance than a note from Tinker Bell, then this is the time to get creative. Personally, I like to leave a note that includes four things: a quick mention of the fun from the prior day, an itinerary for the current day, an explanation of the gift, and a reminder to be well behaved. On a recent trip with younger relatives of mine, each note was written by a different character and tied into whatever the kids would be doing at the parks that day.

Now that we know what they are, let’s talk about putting them together. The first step in coordinating the gifts is deciding on the actual present part. My personal favorites from that recent trip were goggles, sunglasses, pool toys, glow sticks, puzzles, coloring books, stickers, and games. Most kids I know aren’t too thrilled with new clothes as a gift, but sometimes Disney themed t-shirts or pajamas work wonders for getting children excited to dress for the parks or get ready for bed. You could even make or buy mouse ears that represent their favorite character. The key is to prepare useful items that will be fun during the trip and will pack away easily. This is not the time to buy that 3,000 piece Lego set and expect your child to keep it in the box the entire trip because you don’t want to lose any pieces in the hotel.

Shopping for these souvenirs in advance presents a great opportunity to save some cash. Target, Walmart, dollar stores, party stores, Etsy, and even Amazon are just a few of the places you can find inexpensive Disney inspired gifts. For official Disney Parks merchandise, the Disney Store and Shop Disney Parks app offer discounts on occasion as well, making it easy to save money on things you might buy at the parks anyway. You can also save by including some snacks or candies with the gifts. Personally I like to throw Frozen or Star Wars themed fruit snacks into the bag. The kids can munch on that in the parks rather than splurging on an overpriced bag of Goofy’s Candy Co. character gummies. Disney packaged graham crackers, cookies, and other candies also found their way into the gifts at a much lower price than buying them at Walt Disney World.

Once you finish selecting the presents, your next consideration should be gift bags. Like the gifts, the wrapping must fit easily in a suitcase. Depending on the size of the gifts, small white paper lunch bags decorated with Disney characters and the child’s name work well and are relatively inexpensive. When I did this, I drew characters and wrote each child’s name on a bag for each day. You could just as easily purchase a Disney gift bag for each kid and re-use it each day. Another option is to make your bag out of the gift itself. For example, if part of the gift is a Disney beach towel, lay that down, pile the gifts for the day on top, then pull up the ends of the towel to make a bundle and wrap a ribbon around it. A princess purse or pirate pouch could be used in a similar manner to hold any smaller treats. For one last idea, letting the kids decorate their own bags can build anticipation for the trip and give them something to do during some downtime as well. Might as well score that quiet time when you can!

Putting it all together

With the presents purchased and the bags prepared, the last thing to do is decide on an order for the gifts and write out the letters. Think about your own family and vacation style and plan accordingly. If swimming is an essential part of your vacation, items like googles or water toys should come early in the trip, so they can be used all week. Games or puzzles can be gifted on resort or relaxation days. Activity books work well for the last morning, so that kids have something to do on the flight or drive home. Once the order and itinerary are finalized, the letters can be created as described above.

From my recent experience visiting Walt Disney World with children, Tinker Bell gifts were a fun way to get them out of bed each day. While they had a blast at the parks, the immediate promise of something positive and amusing to them was more effective at waking them up than the thought of being at the parks in another hour or two. They made lots of friends at the pool with their toys, so I never once heard an “I’m bored”. And while it didn’t solve all the sibling squabbles, I think it was a great way to keep that reminder to be on their best behavior in the back of their mind. Plus, because they already had snacks and toys at the ready, they didn’t even really ask for much at the parks. We had a great time, and it was a low cost way to add some extra Disney magic to the trip. As much as I’d love to have a personalized gift from Disney Floral and Gifts delivered every day, it’s just not in the budget, and this was a perfect alternative.

Have you tried this with any of the kids in your traveling party? Would you? Let us know what you think in the comments below.