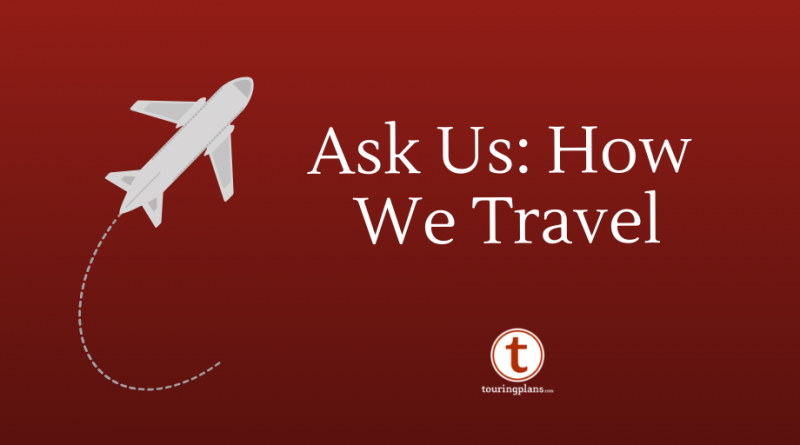 One thing is for certain–TouringPlans bloggers get around. Unfortunately, most of us don’t get around by the super luxe corporate jet, so when we travel for Disney vacations, we’re traveling just like you. Here’s our replies to the question:

How do you get to and around Disney?

I live in Missouri and we often do short trips, so a 15-hour drive just cuts into our vacation time and wears us out too much to be practical. As such, flying makes a lot more sense. My airline of choice is Southwest – they have frequent flights between St. Louis and Orlando, including several non-stops per day and free checked bags. Perhaps more importantly, however, Southwest has one of the best and most flexible reward programs and it’s the airline I fly regularly. That means I can take advantage of my Rapid Rewards status to make the trip easier with things like early boarding, free internet, and my wife flying free as my companion. For more on maximizing your Southwest experience, check out my article, Flying Southwest Like A Boss.

Regarding ground transportation, we’ve gravitated away from relying upon Disney’s Magical Express, and now we either use Lyft to get from the airport, or we rent a car, depending upon what sort of trip we have planned. Once we’re on Disney property, however, we tend to rely upon a combination of Lyft and Disney Transportation – I check the bus times as we’re about to leave, and just call a Lyft if it’s going to be more than a couple of minutes before the next bus arrives. It’s often not necessary, but even when it is, most rides around Disney property are around $10 or less, and particularly on a shorter trip, the time saved and convenience is well worth the minor upcharge.

I’ve moved around a lot in the past few years and have switched airlines and airports several times. Right now I find Southwest flights out of Pittsburgh are the best ratio of price, availability, dates, and convenience.

While I’m not a Southwest Rewards Card member yet I am considering it. I’m usually flying alone so I bring a backpack of items for the plane ride and one carry on.

Speaking of Pittsburgh, there’s a hidden alternate security line that cuts TSA lines by over half; I once skipped a half hour line and walked, stress free, through security. Check if your airport has a similar less obvious security area to save you time and hassle.

When I’m in Orlando I typically take a cab, there’s less chaos than having an Uber or Lyft pick you up and I just want to get to my hotel at that point. On the way to the Orlando airport I’ll take a ride sharing service since I have more time (and don’t have to determine who’s Lyft is for who).

I am a big fan of Southwest Airlines and a participant in their Rapid Rewards program and thus fly with them whenever possible. I have a family condo in Clearwater, so I usually split Florida trips between there and Walt Disney World, flying in and out of Tampa International Airport, and renting a car to get to and from our Disney destination. Tampa International, currently near completion of a massive renovation, is a bright, airy, easy to navigate airport with some amazing in terminal concessions from local staples like Rumfish Grill, PDQ, and Cigar City Brewing. It’s also closer to Walt Disney World than you might think, as a drive to Animal Kingdom Lodge takes around 80 minutes. (Orlando Sanford, a popular choice for those flying with low-cost and local carriers, by comparison is 70 minutes.) For car rentals I opt for National. Their free Emerald Club loyalty program allows members to pay mid-size price and then choose their own car in the lot from the “Emerald Aisle” – a selection of cars ranging from standard midsize vehicles to larger luxury cars, SUV’s, trucks, and more. I’ve personally rented a convertible, a large SUV, and a Prius using Emerald Aisle. It’s a great choice if you don’t need to be locked into a certain vehicle due to party size or special needs.

If the trip is five hours or less, we’ll drive. Longer than that and we tend to fly. Since Delta has a hub in the Twin Cities, that’s the airline we use the most when flying direct to MCO. We’ve always had a good experience and since we’re card members, there are many perks to take advantage of including free checked bags, priority boarding, and mile rewards. Just this year in fact, we’ve redeemed our miles to book SIX round trip flights. Once we arrive in Orlando, we’ll use Disney’s Magical Express as it’s included in our Disney resort hotel cost and we rarely leave Disney property once we get there anyway. We use Disney transportation while on property, but prefer to stay within walking distance to the parks when possible. As for car rental services, we’re Hertz Gold Plus Reward members so we’ll rent from them when needed.

I fly in and out of Orlando frequently, so I have some recommendations for leaving Disney. Since Magical Express insists on picking you up at least three hours before your flight home because security lines at MCO range from reasonable to “oh my heck”, TSA pre-check is a must for me. TSA pre-check is only $85, and that’s for 5 years! Pre-check saves me enough time in line at most airports that it’s astounding. It’s like a gift from the heavens at MCO. An approval appointment was super easy to get, and the appointment itself only took about 15 minutes. Since I travel out of the country regularly, when I had to renew, I went all the way and got Global Entry. It’s only $15 more! So $100 for five years, and it includes TSA pre-check, as well as speeds up my wait anytime I am re-entering the U.S.. Bonus – some cruise terminals even let you use Global Entry to bypass the long customs lines upon disembarkation. Global Entry appointments are harder to get, and there aren’t many locations for it, so I took advantage of an early drop off at MCO, and made an appointment there. It was super quick too!

I’d also like to put in a plug for the USO at MCO. If you are eligible and find yourself with a long wait at MCO, go visit the USO at MCO. It’s a great place to relax and its staffed by wonderful volunteers. Because of donations from Disney, Sea World and Universal, there are some cute themed areas to play video games, surf the web, eat, or just sit in big comfy chairs. It’s been a lifesaver for us if our flights were delayed!

Yet another vote for Southwest! They tend to be one of the least expensive out of my local airport, and I love that they don’t charge for bags or flight change fees. Whenever the price changes, you can rebook at the lower price! The flight attendants are usually hilarious, and it’s the least stressful for me. I recently flew another airline and thought that based on my spot, I’d be early to board. After all their special boarding groups, I realized I was no where near boarding early and almost had to check my carry-on bag with all my valuables that I specifically didn’t want to check. After years of flying Southwest, I prefer their system.

I usually fly directly into Orlando (MCO), but I’ve been known to fly in and out of Tampa if the price is right. Lately I’ve been renting cars with a great discount through Costco to get to/from the airport and around the area (since I like to visit Universal too). I’m definitely reconsidering this with the addition of parking fees at the resorts though.

My travel is just “I fly JetBlue”–not too exciting.

I will add that I have found that sticking to one airline is usually your best bet if you fly often. (I’m still sad I lost my high status on Alaska after I left Seattle, though I’m nearly Mosaic on JetBlue now.)

We fly to WDW (and basically all our other vacation destinations), so I like the Hopper app for tracking flight prices to find the best option that works for us. Since that does not always mean we are using the same airline consistently, I rely less on frequent flyer miles and more on credit card rewards. Our AMEX also gives us an annual baggage fee reimbursement with one airline of our choice. Although we always stay on Disney property, we don’t always use Magical Express or the WDW buses. Especially for traveling within property, the time saved and the convenience of grabbing an Uber/Lyft is well worth figuring into our overall vacation budget.

I live within walking distance of Magic Kingdom (#humblebrag), although there’s not good walking paths to get from my house there, so I drive. When I lived up in Maryland, I opted to take the AutoTrain. It’s not as great of a value compared with what it used to be, but I did about 18 trips on it over the years. I haven’t flown anywhere in about a decade, but with a Disneyland trip possibly on the horizon, I guess I’ll need to figure out transportation things.

There you have it–our comments about how we get to and around Disney. How do you get around? What airline works best for you, or are you someone who prefers to drive (or a rare gem that likes to travel by train)? Let us know in the comments.

Got a question for us? Feel free to Ask Us!

4 thoughts on “Ask Us: How We Travel”