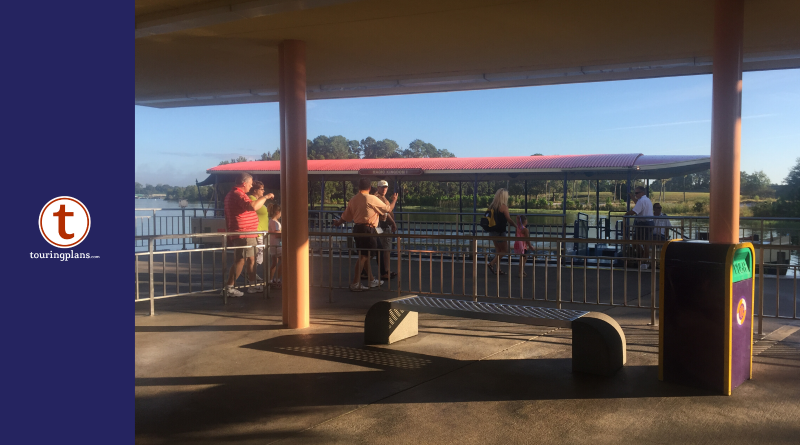 Disney’s Animal Kingdom park was Walt Disney World’s fourth theme park and unlike any other park Disney had created. After all, the main attractions at this park are alive! Ever since it debuted in 1998, Disney’s Animal Kingdom has evolved and expanded with the addition of new attractions, expanded lands, and even the wildly popular opening of Pandora – The World of Avatar in 2017. So for today’s installment of Attraction Archaeology, we’re taking a look at an attraction of Animal Kingdom’s past with the Discovery River Boats.

What Were the Discovery River Boats? 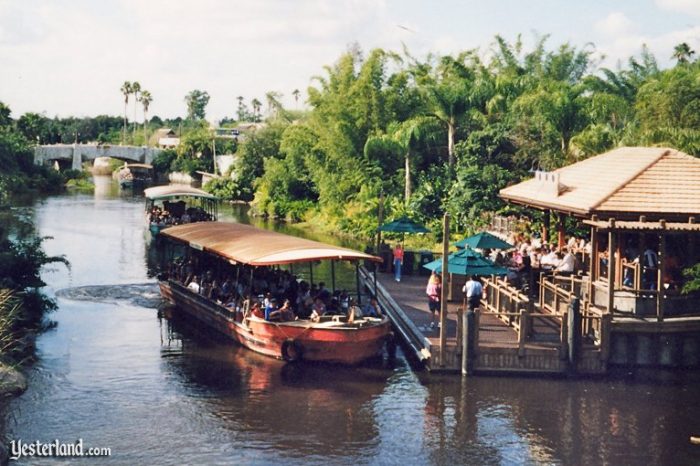 The Discovery River Boats opened with the park on April 22, 1998, and offered gentle cruises around the Tree of Life and past the park’s different lands. There were two separate docks where guests would board with one at Safari Village (now known as Discovery Island) and the other at Asia’s Upcountry Landing. 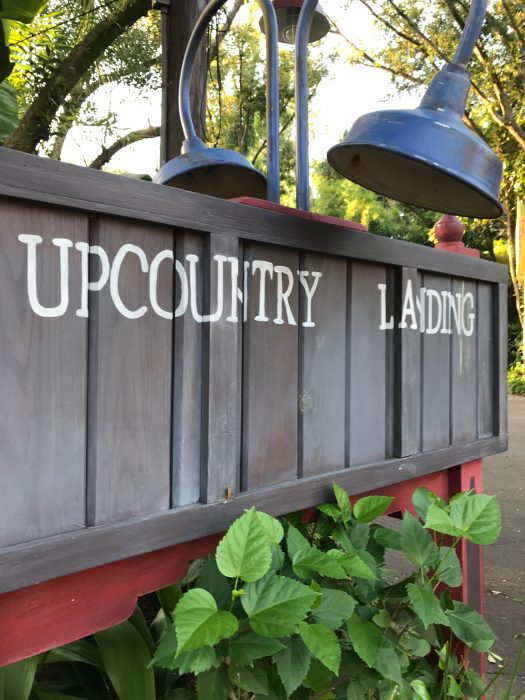 In addition to the different areas of the park, guests would see other sights during their ride. There were hot spring geysers in Africa, a rocky cave home to a dragon who breathed out fire, sculptures spraying water, and even an audio-animatronic Iguanadon from the park’s Countdown to Extinction attraction (now known as DINOSAUR). However, the park removed the latter surprisingly early in November of 1998. Also, some claim there was a stationary unicorn statue on display during the attraction’s early days but was quickly removed. 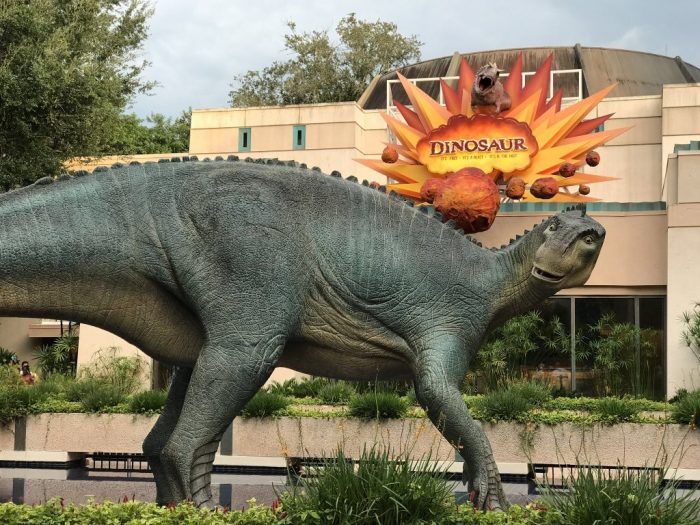 Due to the lack of things to see during the ride, the Discovery River Boats was renamed the Discovery River Taxis later that year. This was to emphasize the boats more as a form on transportation instead of an actual attraction. Cast Members also began to bring aboard small animals and creatures to teach guests about them during the cruise. While the addition did serve the park’s purpose of animal education, it did little to help the overall ride experience.

In 1999, the Discover River Taxis was renamed again! Now known as the Radio Disney Cruise, guests heard recordings from Radio Disney DJs during the ride. Guests were even told the DJs were broadcasting from the top of Animal Kingdom’s signature Tree of Life! Despite these particular changes, the attraction closed for good on August 21, 1999.

The Original Vision for the Discovery River Boats

Now Imagineers originally had much bigger plans for the Discovery River Boats which never came to fruition due to budget cuts. This was also the case for Beastly Kingdom, an area of the park dedicated to mythical creatures which never came to be. Several of these scenes were for Beastly Kingdom, such as the dragon’s cave, the small dragon waterfall, and the unicorn. However, Imagineers had wanted these scenes to be much more exciting. For instance, Imagineers wanted an audio-animatronic dragon, just like the dragon from Disneyland Paris, as opposed to just a cave and fire effect.

Where Were the Discovery River Boats?

Camp Minnie-Mickey occupied the land which had been set apart for Beastly Kingdom. Here guests met with characters and experienced the Festival of the Lion King show which now plays in Africa. In 2014, Camp Minnie-Mickey closed to make way for Pandora – The World of Avatar. In a way, dragons (or banshees) finally did come to this corner of the park!

The Discovery River Boats produced long lines with little to see aboard during its lengthy eighteen minute cruise. Many guests complained, and each new attempt to adjust the attraction failed to solve its issues.

Where Can You Find Remnants of the Discovery River Boats Today? 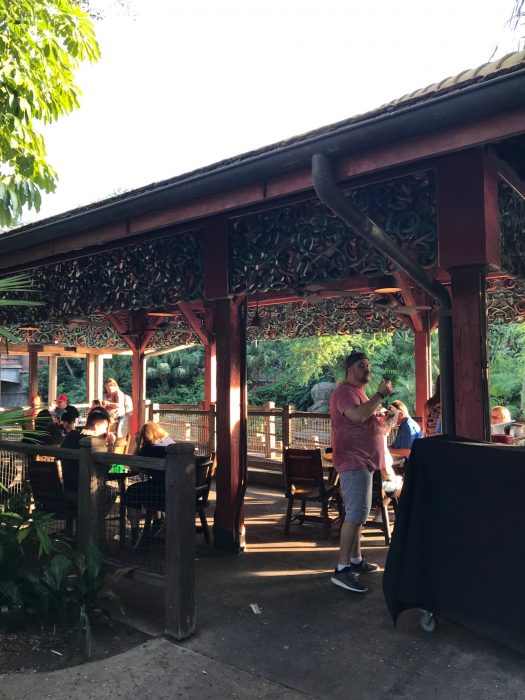 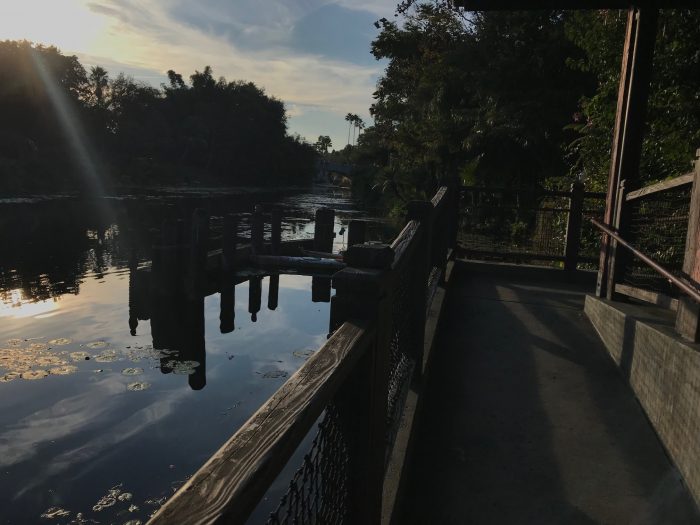 Currently, the space is being used as an additional seating area. The boats themselves have been used to transport guests to and from the Magic Kingdom during certain times of year.

Also, guests can see the dragon-shaped rock structure which served as a small waterfall during the attraction’s operation. It’s visible when crossing the bridge into Pandora – The World of Avatar or when dining at Nomad Lounge. The hot springs geysers near the Africa pavilion are also still visible, even though they no longer shoot water. They can best be seen when taking the bridge from Africa to Pandora – The World of Avatar.

While I enjoy what the Disney Parks have to offer now, I also enjoy discovering relics and tributes to the magic and memories that came before and their presence in the parks today. Did you ever experience the Discovery River Boats or its other iterations? If so, please share your experiences!