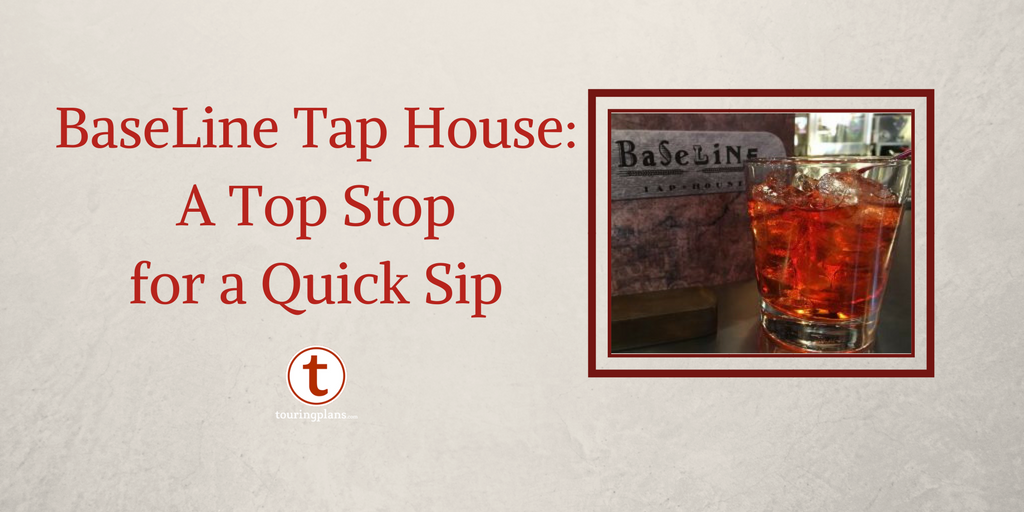 Recently opened at Disney’s Hollywood Studios, BaseLine Tap House serves up brews and snacks for guests of the park’s newly created Grand Avenue. Located in the former Writer’s Stop spot, BaseLine is primarily a craft beer bar specializing in beers native to California, themed as a former print studio in a modern warehouse setting. I dropped in on opening day to sample a few of the menu options and see if it’s worthy of a stop on your next trip. It was raining on opening day, sadly, so much of the charm of the front entrance’s large porch and seating area was dimmed, but the ample amount of umbrella-topped tables makes for a great escape from the Florida sun if you need to sit for a spell and relax. The inside of the Tap House does not feature much in the way of seating – chairs line the exterior wall, and a few tables on one end offer seating, but otherwise, the bar is standing-room only. This made the atmosphere feel a bit like my local hole-in-the-wall bar, purposeful, and not inconvenient, though this does encourage quicker visits for each guest – lack of seating means less incentive to linger (though you should stay long enough to listen to some of the killer music they play – the loop is nearly 5 hours long!).

I was greeted pretty quickly by one of several very busy bartenders at the main bar, who took my order and asked if I was partaking inside or needing to-go service. Proper glassware is provided for those staying indoors; for those hanging outside or leaving, standard plasticware is offered.  Any food or drinks you order are picked up from the bar (by you) and then you are free to wander inside or out to wherever you can find comfortable space. The Tap House features a short food menu in addition to its short wine and cocktail lists and extensive (for Disney) beer list. I ordered one of everything food-wise, and was pleasantly surprised by the quality of it all. First up: the Bavarian pretzel with beer cheese fondue. This was your standard giant pretzel, served soft and warm (always welcome), but the beer cheese fondue was a little on the runny/thin side. It was much better once it had set up a bit after sitting while we snacked on other things. The side of deli brown mustard was exactly as expected, brown mustard, but a nice tangy break from the cheese every few bites. Overall, it’s an expensive snack at $9, but with a beer, it’s tough to beat. Second, I tried the California cheese and charcuterie plate, which I’m almost afraid to say is a steal for $10. Featuring three cheeses (a goat, a blue, and a mild farm), two kids of meat (chorizo and salami), as well as little cornichon pickles, grapes, spicy whole grain mustard, and toasted baguette slices, this was a fantastic snack. I’ve eaten a lot of cheese and charcuterie plates around Walt Disney World, and while none of these selections are going to blow your mind in terms of originality, they were all good portions, freshly cut, and really hit the spot. For the price, this is a hidden gem heavy snack or light meal. Last, the traditional bar snack turned modern – house-made sweet and spicy toasted almonds. Here, you get a good sized snacking basket for $6 of crunchy, salty, sweet, slightly “spicy” nuts, and nothing else. It’s exactly as advertised, and as far as bar snacks go, they’re great. I’m a little sad these can’t be a standard small side if you order a drink, but they’re just tasty addictive enough that I’ll order a whole basket next visit regardless.

But how are the drinks, you ask? Pretty solid, in my opinion. I’ll start with the less-than-great parts of the menu – the wines and cocktails. Bad news? There are two wines and two cocktails on the menu. Total. Good news? If you like standard bar drinks, BaseLine has a fairly decent selection of spirits (some are even solid top-shelf options, like Hendrick’s as their only gin option, etc.) and very skilled bartenders who can whip up anything you’d like with what they’ve got. I didn’t have a chance to sample either of the wines on tap ($9 a glass – a little steep, in my opinion, considering the beer and spirit prices), but I did try the Negroni, made in batches in-house daily and served on tap. For $11.25, I expected a Negroni that would blow my face off, and while this was pretty decent, I wouldn’t necessarily consider it worth the price. However, since Negronis are so few and far between at Walt Disney World bars (and the only other mixed drink alternative is a very sweet, juice-heavy vodka/SoCo selection called the California Sunset), I’ll take it.

Better options for non-beer drinkers include having one of the helpful bartenders whip up something using the non-alcoholic black cherry soda on tap (trust me, it’s a tasty mixer), or the Ace Space Blood Orange Hard Cider ($9.50 for 16oz, also available as a pour for the beer flight). Speaking of beer flights – take advantage of this offering. It’s not often you can find a mix-and-match style flight at Walt Disney World, and with the California-centric, well-rounded on-tap beer list on offer, it is so worth the $10.50 for four 5oz pours. Standard pours of any of the beers will run you $8.25 or $9.50, depending on if you select the 16 or 22oz pour option. (Sizes in beer pours? Most Disney bars would never!)

I’m no beer expert, so I’ll refrain from a sip-by-sip of each option I tried, but each pour was at the right temperature (not warm, not too cold) and the glassware was solid and clean. For the beer flights, you receive four nifty little cards explaining each beer, that, shockingly, you get to keep when you leave – a nice touch, but one I don’t expect to last too long.

All in all, BaseLine Tap House is a solid home run for me – it delivers exactly what I’d expect out of a spot like this, and for semi-reasonable prices, too. No discounts are currently offered, though bartenders indicated Tables in Wonderland may be offered in the future. Even as a Writer’s Stop lover in the past, this space is much more effectively used now as the Tap House, and I can’t wait to drop in again next time I need a break from the theme park hustle and bustle!

One thought on “BaseLine Tap House: A Top Stop for a Quick Sip”