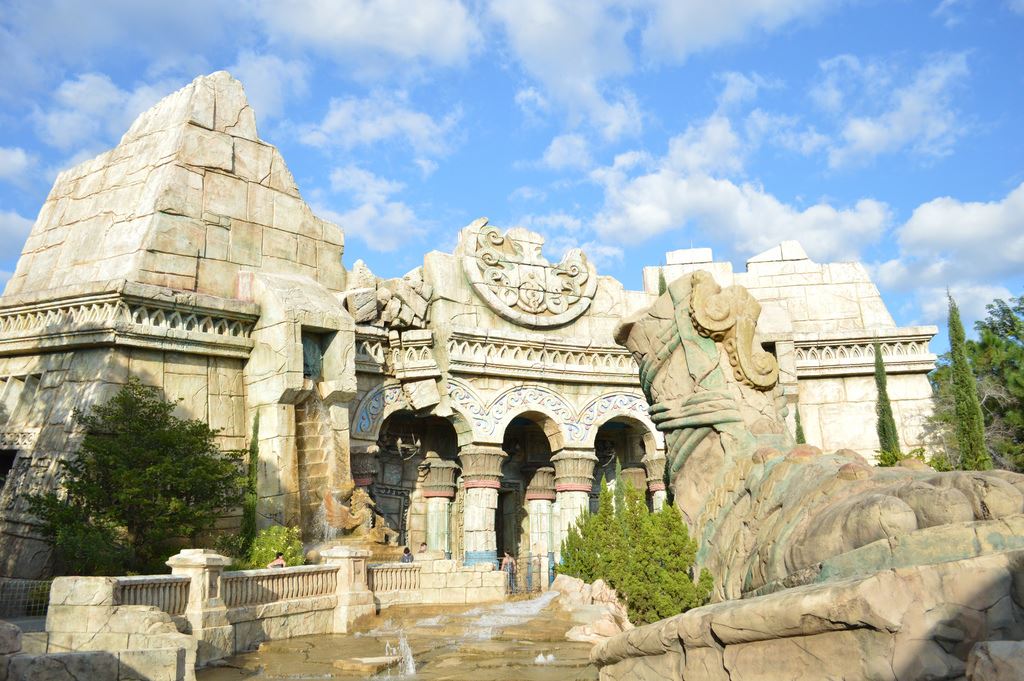 Maybe you’re looking to step a foot off the (extremely) well-beaten path to get away from the crowds. Maybe you have an appreciation for the under-valued (or a defiantly contrarian attitude, generally). Or maybe it isn’t your first rodeo, and you and your family need an injection of something different and fresh at the parks. Let’s get all of the good stuff out of the way first: Poseidon’s Fury is a walk-through attraction (the last remaining one at either of Universal Orlando’s two parks), which provides a nice change of pace from the rip-roaring thrill rides (such as the absolutely stellar Harry Potter and the Forbidden Journey) but yet still contains more energy than a standard theatrical show (like The Eighth Voyage of Sinbad stunt show, which is located right next-door). Even better, its premise holds all kinds of potential: guests join Taylor (a live actor, and not some audio-animatronic or video-projection concoction) from the Global Discovery Group as he explores the ancient Temple of Poseidon.

The attraction’s theming is more than up to the task of keeping pace with the story. The design of each of the three sets guests walk through is detailed and immersive, and the queue has an almost ethereal quality to it, providing hints of long-buried secrets about to be uncovered while also maintaining a beauty that isn’t to be found in all the rest of Islands of Adventure (yes, yes – The Wizarding World of Harry Potter – Hogsmeade is gorgeous, but in an entirely different way). But neither can possibly hope to match Poseidon’s exterior – the majesty and grandeur of the dilapidated temple is simply unparalleled. It’s easy to imagine that the façade alone has enticed most of the attraction’s guests to give it a spin over the past 17 years.

And then there are the special effects. Poseidon’s Fury’s grand finale, in which the titular god has an ultimate, superpowered showdown with the evil Lord Darkenon, is projected onto special rain screens – that is to say, screens made out of cascading water as opposed to pieces of fabric or plastic (the first application of this particular technology in the theme park industry, Universal is only too happy to point out) – but is punctuated by explosions of water set off by various cannons and mortars, four different types of lasers, and over 200 individual flame effects (the weapon of choice for Darkenon).

The single biggest show-stopping moment, however, has nothing to do with divine battles and everything to do with water (are you surprised, given the title of the attraction?). As guests shuffle along to the final scene, they must pass through a giant water vortex – 40 feet long and 18 feet in diameter, with 40 giant nozzles shooting out water somewhere between 90 and 100 mph in order to have it arch all the way along the tunnel’s circumference, making it look as if the wall is truly made out of water. It’s a magical, dizzying display, the highlight of the attraction and easily one of the neatest sights to be had at the entire resort.

Now let’s get to the bad news: despite all the well-crafted individual pieces-parts, they can’t possibly hope to add up to an overall experience that is actually any good. The walk-through nature of the attraction can leave many in the audience without a good perspective of all the action (we suppose there’s a reason why Universal has never made another one), Taylor’s acting is written to be way over the top, and the grand finale is marred by incredibly cheesy character designs (not that a name like “Lord Darkenon” demands anything less), even worse dialogue, and a final battle that plays out mostly on large screens in front of the huddled crowd instead of being stretched out all around them. Even the famed water vortex tunnel, which many diehard Universal fans claim the whole attraction is worth schlepping through exclusively for, is oftentimes plagued with technical glitches and, thus, isn’t operational a surprising portion of the time.

Still, even with all of Poseidon’s struggles with quality, the attraction can still be fun and is well worth experiencing, even if once – and if one can focus all of his attention on the specific aspects that are worth singling out and concentrating upon, he will find his time well-rewarded. This is especially true given all the repeated rumors that The Lost Continent is soon to go the way of the theme park dodo, making room for a new property (perhaps Fantastic Beasts and Where to Find Them, the Harry Potter spinoff) to help usher even more people through the front gate. (Are you a member of the small-but-incredibly-dedicated Poseidon’s Fury fan club? Please share your experiences at, and appreciation of, this attraction with all the rest of us in the comments below – your insights are more definitely welcome.)