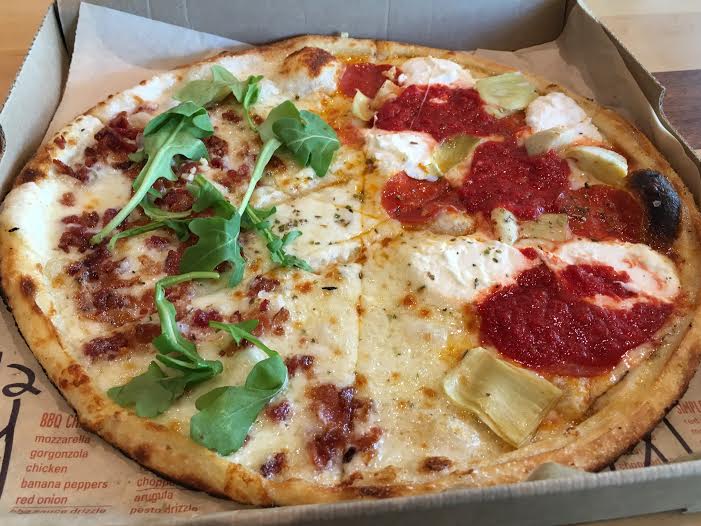 As I mentioned last week, Disney Springs has had so many new restaurants open in the past few months. Just last Friday, one of the final pieces of the dining puzzle opened its doors to welcome pizza lovers from near and far. Blaze Pizza, located in the Town Center area just across the springs from Homecoming Kitchen, is a fast casual chain that promises fast-fired pizzas and salads in just 3 minutes. The easiest way to think of Blaze is to look at it as Chipotle for pizza: pretty much everything is customizable, from the crust, to the sauce, toppings, and pizza finishes.

After my first glance at the menu board outside the restaurant, I was excited to try Blaze just based on the price – a plain cheese pizza, 11” personal size (as all pizzas are served here), is just $7.25; add one topping out of a huge selection, and the price is $8.45. For any and all toppings you want, or one of the specialty pizzas, the price is still less than $10, at $9.65! You can even have your pizza made half-and-half, if you’re indecisive or looking to split a pie with a friend, at no additional cost. I visited Blaze not long after it opened a few days ago for an early lunch, so there wasn’t yet a long wait that particular day (though a queue was set up outside for later use during rushes). Once I was greeted inside, I was introduced to the huge variety of topping options and the four “simple salads” available. I decided to leave my first pie at Blaze Pizza up to the experts, so I ordered half-White Top (white cream sauce base, mozzarella, bacon, garlic, oregano, and arugula) and half-Art Lover (artichoke, mozzarella, ricotta, garlic, and dollops of red sauce on top). I also chose to add pepperoni on the Art Lover half, just to see what the portion size was like there, too. I’m glad I took a chance adding a topping here, because my expert pizza makers made it clear that some who’ve passed through the doors of Blaze had already made a fatal pizza flaw: too many toppings. They really do know their stuff – too many toppings leads to soggy pizza, one that’s harder for them to cook and for you to eat.

Simple is better here, and while you don’t get a ton of each topping on your pizza, everything I tasted on my pie was fresh and flavorful to the point that I didn’t really miss the extra few bites. I chose the standard crust, which is thin, almost like a flatbread. The high-rise crust was explained to me as being a bit more like what most would think of as “normal pizza crust”, but at $2 more, I felt like the standard crust was just fine. Gluten-free crust is also available, though the pizza makers warned that they can’t guarantee against cross-contamination as far as allergies are concerned. For vegans and vegetarians, there is a vegan cheese option, and a TON of fresh veggies – seriously, this was a huge, very pleasant surprise to me. Between the inherent customization of each pie and the number of options for toppings, Blaze rockets to the top of the list as one of the most vegetarian-friendly quick service options at Walt Disney World.

So, how was the pizza? Overall, pretty good. The best comparison I can think of in terms of toppings, crust, and bake is Via Napoli. Blaze has the same distinctive pizza oven char on parts of the crust (I love this flavor, but I know some don’t), and the portion and price make this a great option if you’re craving Via Napoli but it’s not your day to visit Epcot.

The White Top half of my pizza featured a garlicky white sauce base, a ton of chopped, salty bacon, and a fairly thin but tasty layer of mozzarella, perfectly melted on top. The Art Lover half featured several large chunks of artichokes, set off by creamy ricotta and a really, really tasty red sauce: acidic from the rich tomato flavor, but herbaceous with lots of oregano and basil, and not too runny.

On its own, this 11 inch pie was plenty for me for a meal (and a great deal at that). If you’re not overly hungry, my recommendation is to split one of these pizzas and one of Blaze’s “simple salads” with a friend. On the day I visited, Blaze featured four salads: simple Caesar, tomato and mozzarella (not pictured), kale and quinoa, and an arugula/fresh fruit salad. I chose the last option, and was pleasantly surprised at the portion size for this “side salad”, featuring crisp arugula dotted with a few ripe, sweet blueberries and bits of goat cheese and drizzled with a zingy balsamic vinaigrette.

I ended up taking home about half of it for a meal later in the day (along with a slice of pizza in the convenient to-go boxes available near the door). For a lighter, fresh lunch option, you can add any protein to one of these salads for $2 – large enough for one person, and still a deal. To complement my meal, I tried the blood orange lemonade. $3 for a drink is kind of steep to me, especially when it’s a smaller size than a “regular” Disney fountain soda. The lemonade, though, was a fair trade for that price – a little sweet, with a tad bitterness from the blood orange, and lots of sourness. I wouldn’t order it instead of a soda or water every day, but it was a refreshing splurge for this meal.

Also a splurge: the “s’mores pie” I got for dessert – two McVitie’s digestive biscuits (sort of like a graham cracker, but a bit more substantial, so it holds together better) sandwiching a layer of marshmallow and chocolate. It was tasty, to be sure (with those flavors, not hard to do), but next time I’ll likely save my $3 and invest it in an Amorette’s specialty.

Blaze Pizza is sure to be a very popular option here at Disney Springs – it’s actually good pizza, super-customizable, and quick; plus, everyone loves pizza. The best part (which I hate mentioning, for fear of rising prices)? It’s “cheap” by Disney standards, even for quick service. A pizza at Blaze with whatever you want on it is cheaper than the also-great BB Wolf’s Sausage Company’s options, and far better than anything I’ve tried at The Daily Poutine. I’d venture to say it also gives Splitsville’s pizza a run for its money, considering the toppings at Blaze are noticeably fresher. All in all, it’s safe to say Blaze Pizza is worth a stop on your next visit to Disney Springs if you’re looking for something fast but also just plain delicious.

4 thoughts on “Blaze Pizza: A Fast Favorite at Disney Springs”