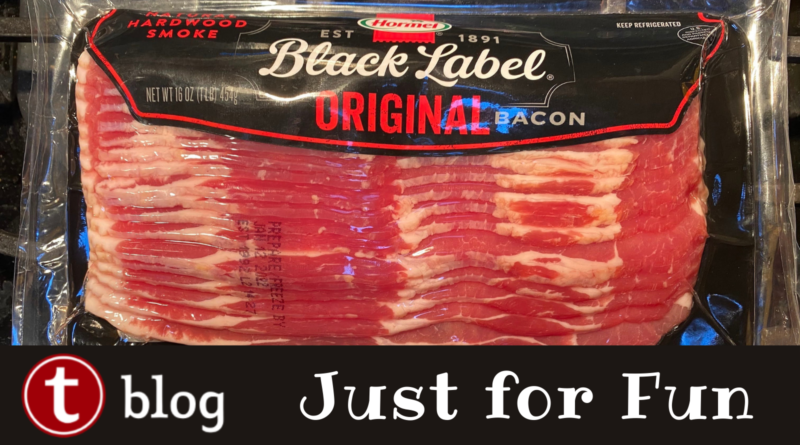 Some people hold that if you’re cooking then it isn’t vacation.  Others (like me) feel that eating out thrice a day with your offspring is stressful enough to destroy any vacation vibe. It’s not so much that I absolutely adore cooking, as that it seems such a small price to pay for arriving home with the same number of children I left with.

Cooking in a timeshare kitchen can be a challenge since the tools on hand are often more limited than what you’ll have at home, and one food that can be especially tricky and yet oh-so-worth-it is bacon.  It’s a breakfast staple, a crunchy salad topping, and a pillar of many great sandwiches.  I know I’m not alone here in my bacon love, since a menu search using the Lines app returns 24 pages of bacon-containing dishes from eateries around WDW. And did you know that Americans eat almost 18 pounds of bacon apiece each year?

So how can you conquer making bacon on vacation?  Let’s do a comprehensive rundown.

Pre-cooked bacon that just needs heating is available at many supermarkets. It can seem overpriced, but packages usually contain a similar number of slices to a half pound of raw bacon; they’re just smaller since a lot of fat has rendered off during cooking.  On a per slice basis I find pre-cooked and raw are usually comparably priced.

The biggest upside to fully cooked bacon is that it if you buy the shelf-stable kind (check the package) you don’t need to refrigerate until after you open it. If you’re working with a mini-fridge or half-size you won’t have to sacrifice any space to your bacon, and if you buy it and don’t end up using it you can just toss it in your suitcase and bring it home. Pre-cooked bacon also has the fastest cook time at 30-40 seconds for two slices in the microwave; not a surprise given that you’re just crisping it.

Many studio rooms only have a microwave available.  If that’s you then your best bet might be pre-cooked, but raw bacon can also be cooked in the microwave. Opinions on the flavor of microwave bacon vary widely, with some swearing by it and some swearing to never do it again. In my experience crispy-lovers tend to be more satisfied than chewy-lovers.

The general method is to place 4 slices on top of folded paper towels on a plate, top with another paper towel to prevent spatter, then microwave for 4-5 minutes.  Since this method is fast it’s easy to overdo it, and you should be careful of carryover cooking — it will crisp as it cools.

Pans are routinely panned (see what I did there?) as a low-throughput method, fitting at most 6-8 slices in a 12-inch pan.  You can add more slices as the ones in the pan cook and shrink, but that’s still not going to make it super efficient. It’s quick and no-fuss for a few slices, but enough for a family means multiple batches. Multiple batches means more spatter, and smoke detectors going off if you’re not careful about fishing out the burnt bits. And then there’s the pan: in a timeshare the pan is usually either cheap non-stick that may not heat evenly or stainless steel that won’t be cleanup-friendly.

To cook bacon in a pan, lay slices flat and not overlapping on the bottom of a cold pan and cook over moderate heat.  Turn at least once during cooking and more often if necessary for even browning.  Drain on paper towels before serving.

The oven often gets the nod as the best at making bacon for a crowd, and with five in my family it’s the method I turn to the most often. Recipes generally advise using a half-sheet pan, but smaller sizes and roasting pans (even pyrex or EZ-foil ones) can also be used.  That makes this method one of the most adaptable to whatever equipment you have on hand.

Lay bacon on the bottom of the pan. Since the bacon doesn’t rely only on contact with the pan to cook it, it’s fine to overlap the slices. Bacon cooks more slowly in the oven, so you’ll have time to get in there and separate them as the fat starts to render and before they stick together. Cook at 400ºF for 20-40 minutes until desired degree of doneness, then transfer to paper towels or a rack to drain before serving.

You might notice that this is a pretty wide range of timing — it depends on what the pan is made of and how much you’ve overlapped the bacon — but it’s all hands off. You can start in a cold oven if you prefer, and it’s safe to turn down the heat to 375 or even a bit lower if you’re worried about your unfamiliar oven smoking. Lower temperatures will add quite a bit to the cook time.

Like the microwave, sometimes a grill is the only thing you’ve got in vacation lodgings.  What not to do: put bacon on the grates directly over the flame.  Been there, done that, got the adrenaline rush to prove it!  Instead, use indirect heat or a pan set on the grate — you can even make an impromptu pan out of foil, it just needs to be sturdy enough to keep grease from dripping straight onto the fire and causing flare-ups. Cooking times and the need for turning will vary with the heat and setup of your grill.

For the Truly Committed

… or perhaps those who should be committed: sous-vide bacon. It can take a couple of tries to master this, but once you’ve got it under your belt I would put this as a serious contender on the understanding that you sous vide at home, freeze for transport, and then just do the final sear on site. The obvious negative of sous-vide bacon is that it takes some pre-vacation overhead and you have to live close enough for transport to be an option. The up side is that finishing only takes about 2 minutes in a pan, giving you large-batch throughput as good or better than the oven, and the bacon it makes is really, really delicious.

Do you cook with bacon on vacation? Do you have a favorite tip?  Let us know in the comments.

12 thoughts on “Cooking in a DVC Kitchen: Bacon on Vacation”