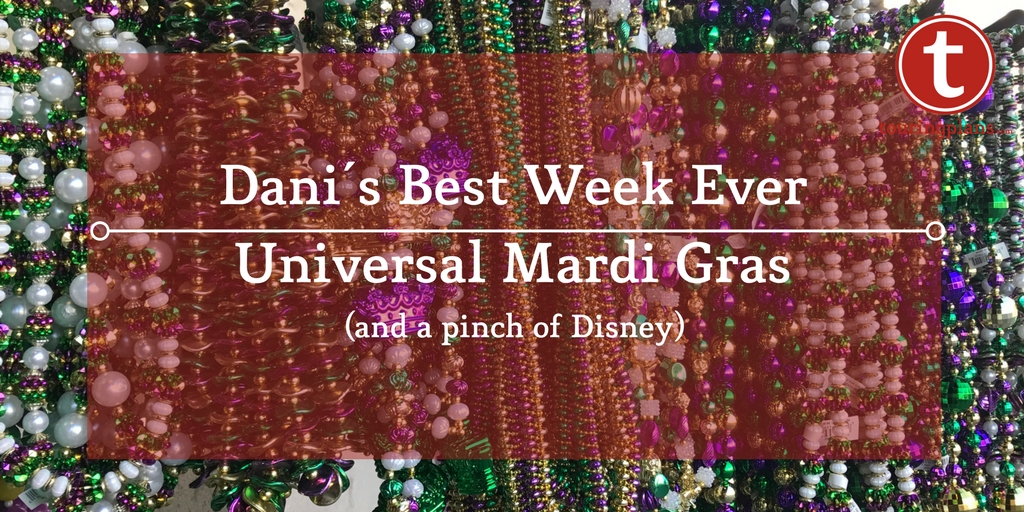 The Big Easy has arrived in Orlando. Universal Mardi Gras 2017 is now in full swing, through March 25, 2017. This year marks the first time that Mardi Gras fills the streets of Universal Studios Florida every single night. It’s nice to know more guests are able to enjoy this lively celebration no matter the day of the week. I paid a visit to Universal Orlando to get some Mardi Gras flavor in my life, and I even managed to make it over to Walt Disney World and visit two parks in two hours! The weather couldn’t have been any more perfect. Blue skies, temperature in the 70s, and the crowds very low. As jazz music filled the air at Universal Studios I found a pep in my step; the Big Easy taking hold. One of the sights that always signals to me that Mardi Gras has indeed arrived is the hundreds of deluxe beads dripping from the merchandise displays near the front of the park. There are plenty of free beads given out by parade performers both before and during the parade, but if you want to plus your Mardi Gras regalia then you can purchase these deluxe beads for $4.00 each (Annual Pass discount is available). After a morning of housework and chores I arrived around 3:00 PM just as the Universal Superstar Parade began. I noticed that parade performers for the Mardi Gras parade filled Universal Music Plaza, ready to greet guests and get them into the Mardi Gras mood. My friend and I took a quick moment to snap a few pictures with these talented performers before meeting up with another friend at Finnegan’s Bar and Grill. After catching up with each other over a round of Guinness at Finnegan’s we decided to head down Delaney Street to see if we could find the slightly hidden doorway that is a recreation of the speakeasy seen in Fantastic Beasts and Where to Find Them. This doorway made its debut during this year’s Harry Potter Celebration and so far it has stuck around, adding a little touch of the Wizading World to the New York area of Universal Studios Florida.

The smell of Cajun cooking wafted over the breeze and we could resist no more. The French Quarter Courtyard marks the hub of Mardi Gras activity. There’s multiple food and beverage booths, a tent for psychic readings, and brass bands blow away park guests with their infectious, upbeat jazz. This year there is no longer a stage in the French Quarter, and the bands are all new with a focus on brass instruments as opposed to zydeco bands. They perform on the corner, street level, at the entrance to the French Quarter Courtyard, across from Jimmy Fallon Race Through New York. I noticed that compared to years past, more guests got into the action and danced to the music with this new set up.

This is what sets the tone of Universal Mardi Gras, for me. The jazz, the dancing, the costumes, and the food. There’s plenty of great choices in the French Quarter Courtyard for food, the Cajun Sampler is my go-to, at least for my first visit to Mardi Gras each year. For $12.99 (Annual Passholders receive 10% off 4:00 PM – 6:00 PM) you can enjoy the best of the bayou: a cup of shrimp gumbo, shrimp and chicken jambalaya, and andouille sausage with peppers. I shared the sampler with a friend, while my other friend ordered the jambalaya on its own. It’s topped with a whole crawfish; being from the Midwest she’d never encountered such shellfish before, it was fun teaching her how to eat it. I think her cocktail in this year’s souvenir Mardi Gras cup helped bring on some bravery.

The food is toned down, hardly any heat, so I needed to add some hot sauce to make it taste more like the Cajun food I’m used to as a Southern girl. I paired my food with a 3 Daughters Red Ale, which is new this year. I loved the complex flavor of it and enjoyed sipping on it as we eventually made our way to the back of the park.

But, before we could leave the French Quarter something caught my eye. The dessert tent offers beignets and “funnel puffs” which appeared new to me. Sure enough when I asked the Universal Team Member she confirmed they are new, so I had to do what any self respecting blogger would do, I ordered them! My friend has a dairy allergy so we asked that they hold the whipped topping that normally crowns this cluster of funnel cake nuggets.

A generous dusting of powdered sugar blankets the puffs. You can choose strawberry, chocolate, or caramel sauce to have drizzled on top. At $7.99 the price is a bit high for a dessert, and the serving is very large, sharing encouraged. They are similar to beignets: fried dough and powdered sugar, but the dough is denser than beignets and the caramel sauce made them decadently delicious.

We made our way to the back of the park ready to challenge each other on Men in Black: Alien Attack. The posted standby wait time was 10 minutes, but we were on our ride vehicle in just about five minutes. The spinning of this ride gets to me, awakening my motion sickness, so I used that as my excuse for having the lowest score of the ride vehicle. Still, I enjoy this dark ride with practical effects and audio animontronics as opposed to projections and screens.

Speaking of screens, I decided to venture on The Simpsons Ride for the second time in my entire life. The ride recently came out of refurbishment and although I’d never ridden it before the refurbishment it seems the projection is a lot clearer and other in-ride effects improved. As a big fan of The Simpsons I enjoy the humor and details of this ride. It is a simulator and definitely makes me a little nauseous, but nothing too intense.

It neared 6:00 PM and my friends needed to depart, I bid them farewell and considered waiting to watch the Mardi Gras parade, something I’ve yet to do this year. The parade has all new floats and costumes, mixed with a few returning favorites. As I headed toward the front of the park, at about 6:15 PM I noticed there was plenty of room in the Annual Passholder viewing area near Mel’s Drive-In as well as the Little Jesters kid friendly viewing area, near Brown Derby hat shop. The parade was scheduled for 6:45 PM and I decided I needed to head to Walt Disney World sooner rather than later. I had a great time at Universal Mardi Gras, with friends, but now it was time for a mission. A quick trip to Disney’s Hollywood Studios and Epcot

Thanks to Preferred Parking at Universal Orlando, and knowing the ways to navigate treacherous Interstate 4, I arrived to Disney’s Hollywood Studios in about 20 minutes. Disney’s Hollywood Studios closed at 8:00 PM so when I arrived just before 7:00 PM I enjoyed the benefit of being able to park close to the front of the lot. I needed to snap some photos for a project and swung by Backlot Express. This counter service restaurant is near Star Tours – The Adventure Continues. Aside from periodic menu changes, Backlot Express is essentially stuck in 1989. It is a great living relic of the days of Disney-MGM Studios. Fans of the 80s and early 90s should give it a visit. This corner is the park is a bit dark at night. I seriously considered breaking out a flash light, then again I am now in my mid-thirties, maybe age is catching up with me and my eye sight? The night time lighting of Star Tours is impressive and shines amid the darkness. The posted standby wait time was only 10 minutes, I considered jumping on board for a quick ride through the Star Wars galaxy, but my second mission needed to be completed at Epcot.

Knowing my way around Disney property came in handy as I made it door to door to Epcot in less than 15 minutes. While at Hollywood Studios I had booked a FastPass+ for Spaceship Earth just in case I needed it, but when I arrived the posted wait time was only 10 minutes, so although my window hadn’t yet opened I went for standby. I needed to get some video and photos of the ride. It was an interesting experience riding it while paying more attention to the visual content of my recording and photos than to the ride itself. This is a classic attraction that I never get tired of it. It simultaneously brings me back to my childhood while entertaining me even still as an adult because of the updates done over the years. A quick stroll into World Showcase shortly after 8:00 PM was a nice way to wrap up my afternoon of visiting both Universal Orlando and Walt Disney World. There was no line at the Pop Art Food Studio so I purchased a glass of Cloudem Silver Sparkling Wine ($9.00).

This wine has a unique pearly, glittering sheen to it. The beauty of it was lost in the dark night time, much better to enjoy this during the day, letting the sun show off this visually unique wine. It is served in a reusable shatter proof fluke, with an indent for your thumb making it great for carrying around the park. I sipped as I strolled appreciating how fortunate I am to have such evenings like this in Orlando’s theme parks. This is home. And it is afternoons and evenings like this that are the best ever.

5 thoughts on “Dani’s Best Week Ever February 16, 2017: Universal Mardi Gras and a pinch of Disney”