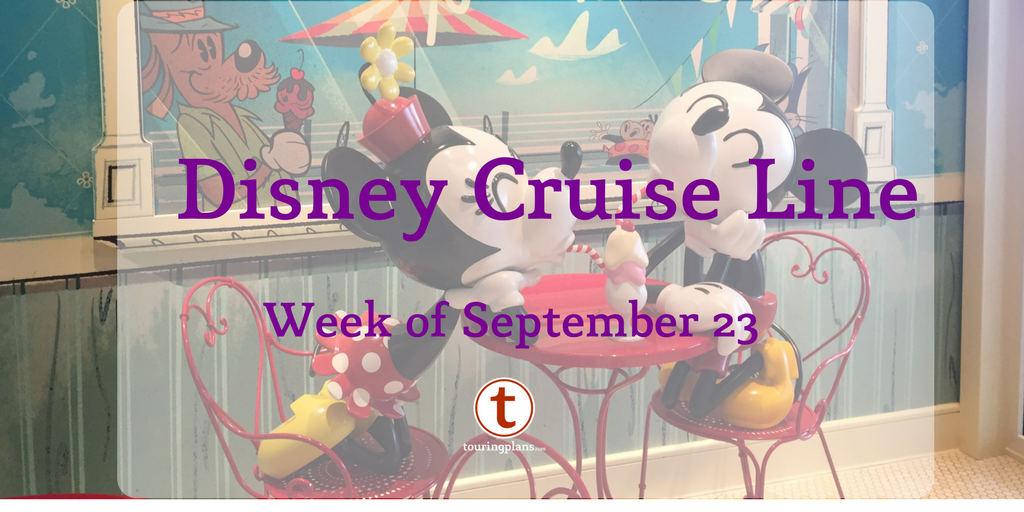 Welcome aboard for this week’s Disney Cruise Line Preview for the week of September 23! I’m Brand Glover, and I’ll be giving you everything you need to know before cruising with Disney Cruise Line this week. We’re back this week with a look at some of the exciting events coming to the high seas in the next few weeks.

The Disney Magic is currently making its return to the United States as it assembles Earth’s mightiest heroes for Marvel’s Day at Sea itineraries, sailing out of New York City. As a preview, The Disney Cruise Line Blog has posted a full rundown of the festivities one can expect for this marvelous day. Guests will experience a family costume celebration (Disney Cruise Line’s costume guidelines do apply), Super Hero training for kids, Marvel film screenings, Marvel-themed trivia, as well as a special party with Mickey and pals dressed in their favorite Super Hero attire. It is worth noting from this release that fireworks will only be offered during the Marvel Day at Sea deck party on these itineraries. In a related update, The Disney Cruise Line Blog provided information regarding pre-booking select meet and greets during the Marvel Day at Sea event. Heroic Encounters – Mission: New York will feature Iron Man, Spider-Man, and Black Panther, while the Heroic Encounter: Groot will feature none other than Groot himself. I am Groot! Pre-booking begins on September 21st for all guests.

As part of their promotion of the Marvel Day at Sea sailings, the Disney Parks Blog has released a Meet The Super Heroes of Marvel Day preview. Star-Lord, leader of the Guardians of the Galaxy, is the first featured Marvel Super Hero. If you’ve never heard of Star-Lord, he’s also featured in Guardians of the Galaxy: Mission Breakout at DCA, meeting guests with Groot at Disney’s Hollywood Studios, and will be making his way to EPCOT in the near future. Oh, and there’s the whole comic book backstory, as well as those two films he was in – which they conveniently cover in the post.

Via Twitter, we have an update from the U.S. Virgin Islands Tourism account urging scheduled visitors to the island to postpone their visits due to the passage of Hurricane Maria. The islands of St. John and St. Thomas are still recovering from the effects of Hurricane Irma, but St. Croix is open for business as usual. For more information and prompt updates on the status of the U.S. Virgin Islands, visit this link to their website.

If you’re looking to save time parking at Port Canaveral, the Port Canaveral Twitter account has some great news for you. Online pre-pay parking is now available for cruise guests who wish to park at their cruise terminal. Parking rates are based on length of cruise, and include taxes. It is worth noting that pre-paid parking costs the same as it would to pay at the terminal, and you are required to show your reservation paperwork upon parking in the garage. Check out the Port Canaveral website for more information on parking, terminal locations, or to book your pre-paid parking.

One of the busiest destinations for Disney Cruise Line is the Caribbean and surrounding areas, which were severely impacted by Hurricanes Irma, Jose, and Maria. While many of the island nations in this region rebuild infrastructure, many are left wondering how it will affect travel in the near future. The USA Today has provided a status list of port destinations in the Caribbean and Mexico, discussing what travelers can expect as far as closures for the time being. Many of these ports are visited by Disney Cruise Line ships, so expect updates to come officially from Disney as to any necessary itinerary changes.