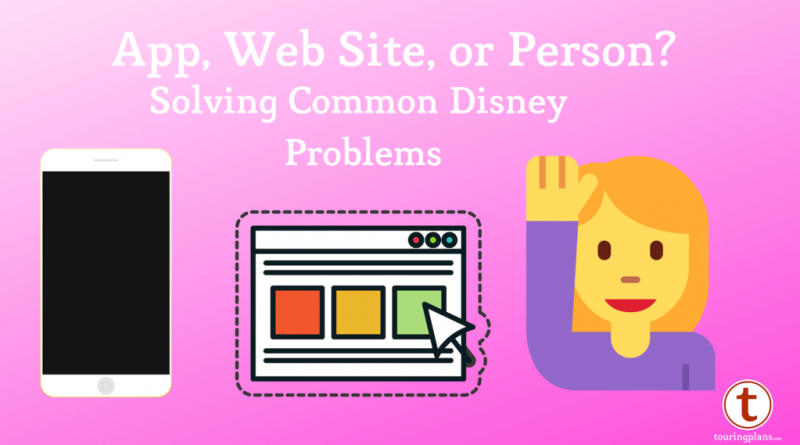 Disney planning can be daunting for some, because for any given need that may arise in connection with a Disney trip, there exist a variety of different ways to address it, from a mobile app, to its website, to the old-school method of just talking to an honest-to-Betsy live human being. All are not created equal, however. Depending upon what you are trying to accomplish, some methods are better than others. Read on for an overview of when to use what when navigating Disney planning!

First, a quick overview of the different ways to communicate and interact with Disney:

In most instances (except as noted herein), you can do pretty much everything you need to do when planning a Disney trip using all of these methods. Indeed, as a fail-safe, a person in Guest Relations (or other relevant department) can ALWAYS help you with whatever Disney planning challenge may present itself, though in most instances you can do things faster yourself using the app or the website.

For routine dining reservations, where you’re just booking an average-sized group at a Disney restaurant, it frankly doesn’t much matter what method you use. I prefer just using the app because I always have my phone on me and it’s easier and faster to just look at my options rather than having to listen to someone on the phone recite them to me. I can often get a reservation booked in the time it would take me to even connect with a Disney representative on the phone — but it’s really a matter of personal preference.

With that said, when you are trying to make a reservation for a larger party, it can be useful to just pick up the phone. The Disney web site will allow you to submit ADR requests for truly massive parties, but in the likely event that doesn’t work, you might have more luck by just calling Disney at 407-WDW-DINE. Restaurants only have so many tables that can accommodate large groups and if you’re using the web site or app, it may not show any availability for your party even though a live person might be able to accommodate you by splitting your group into multiple reservations of a more manageable size at the same time. Obviously, you’d prefer to eat with your entire group together (and sometimes a real person at a restaurant can pull tables together to make that happen as well), but sometimes splitting up can be the difference between being able to eat somewhere and not, and you won’t even know that it’s an option if you rely solely upon the automated system.

The other instance where picking up the phone is not just preferred but necessary is canceling a same-day reservation. The app and website will no longer permit same-day cancellations, but you can often have more success if you pick up the phone and call. There are no guarantees: they are entitled to ding you with the $10 per person charge for canceling the day of a reservation, but in my experience, when you extend them the courtesy of advising them that you’re not going to be there, they’ll often waive the penalty. Your mileage may vary.

One other dining-related tip — if you’re going to one of the Disney Springs restaurants, consider making your reservation online through OpenTable.com (or its app). Reservations made through OpenTable do not carry the same restrictions as those booked through Disney’s system, and they will sometimes have availability that is not reflected on Disney’s site. Disney has yet to include the ability to book a hotel room in its My Disney Experience app.  Accordingly, if you’re booking a room yourself (as opposed to using a travel agent, which we know a lot of you do), you really have two options — you can call Disney, or you can do it on the website.

While both do indeed work, most Disney planning junkies find the experience of comparing hotels and hotel rates to be far easier on the web site. Disney hotel room rates can vary wildly depending upon availability at any given moment. Not only is having someone read you the rates over the phone time consuming and unwieldy, but you’re limited to what the person on the other end of the phone decides to tell you, which means you might be missing out on an opportunity they don’t know you might consider. For example, you might ask the agent to give you prices for Moderate resorts and be left totally unaware that Wilderness Lodge has a glut of rooms and can be booked at that time for just a few dollars more.  Similarly, you may be planning to stay at a monorail resort, but find that there is such a yawning chasm between the price for those and other resorts that you decide it’s worth the trade-off to stay elsewhere. Information is power, and you have access to much more information when you can see all of your options rather than asking someone to relay them to you piecemeal.

If you’re reading this blog, it’s probably because you enjoy the planning aspect of Disney trips, or at least view it as a worthwhile use of your energy compared to just winging it. With that being the case, when booking FastPasses, you’re going to find that using the My Disney Experience app gives you a lot more control and will make the process much easier compared to booking over the phone or in person with a cast member. The website provides this same advantage, but as between the app and the website, the app in my experience is just faster. It’s not dramatically faster, but faster is faster, and why wait for full-sized web-pages to load when you don’t have to.

If you know exactly what you want, purchasing tickets online or via the app is perfectly fine. If you have anything quirky at all, however, or if you aren’t sure exactly what you need (which is increasingly likely given the ever-rising complexity level of Disney ticketing), a little bit of hassle now is better than potentially a ton of hassle down the road — just call Ticketing at (407) 939-7679 and let them walk you through it.

Sometimes you’ll notice that you’re missing some of your PhotoPass photos — for example, you know you went to see Mickey Mouse, but they aren’t showing up on the My Disney Experience app even though other photos taken around the same time are. The good news is that it’s often the case that the photos were just associated with the wrong account by mistake, and you can be reunited with your images with the help of a Cast Member.

The usual process for doing so typically involves you telling them approximately when and where the picture was taken and them manually looking for it. With that being the case, finding lost PhotoPass photos is the sort of thing that really lends itself to an in-person interaction if possible. It’ll be much easier for them to identify you since you’re standing in front of them, and in some instances you may be able to help look.

Would you like to do any of the various excursions and activities around Walt Disney World? Want to go fishing, learn to surf, or book a carriage ride for Christmas? When you’re at home and still in planning mode, you really only have one choice, and that’s picking up the phone — you can’t book these things on the website or via the app.  Most such activities can be booked by calling 407-WDW-PLAY.

There are, however, a couple of noteworthy exceptions: childcare centers like the Pixar Play Zone are booked through the dining line at 407-WDW-DINE, and golf is booked by calling 407-WDW-GOLF (and can actually be booked on the website).

Even at the most magical place on earth, things happen, and Disney’s reaction to those less-than-ideal circumstances is often what separates it from other companies. Cast Members typically try to ensure that guests leave each experience feeling that they’ve been treated more than fairly. Pixie dust can be thrown your way from anywhere, but make an effort to get in front of a live person, or at a minimum speaking to someone on the phone as opposed to just sending a strongly worded email. In my experience, you’re much more likely to have a positive experience if you’re actually talking to a person in real time that can help rather than exchanging digital messages.

Speaking of which, Cast Members, particularly those in Guest Relations, have an enormous amount of discretion in how they handle guest challenges. Moreover, the person you’re speaking with is rarely the source of the problem and genuinely wants you to leave the interaction happy, so this is a great time to remind you that you catch more flies with honey than with vinegar. Give them a reason to want to help you, and you’re much more likely to come out happy than standing at City Hall loudly asking, “DO YOU KNOW HOW MUCH I PAID FOR THIS TRIP?!?!?!?!?”

One quick tip before wrapping up. Sometimes you’ll have a minor question arise that isn’t super time-sensitive, nor is it important enough to merit a trip to Guest Relations. When this happens, consider tweeting at @wdwtoday. In my experience, they are surprisingly responsive and helpful. For example, we were dipping around in the parks one day, were trying to plan our evening, and couldn’t remember when dinner was served at Lilo’s Playhouse (R.I.P.). I regularly use Twitter anyway, so it was easy to pop off a quick message to Disney, and I got a quick and helpful response: We always enjoy hearing from our readers! Do you have things that are best addressed using one method or another when you’re doing your Disney planning? Disagree with anything in here? Let us know in the comments!

One thought on “Disney Planning Challenges — App, Web, or Person?”