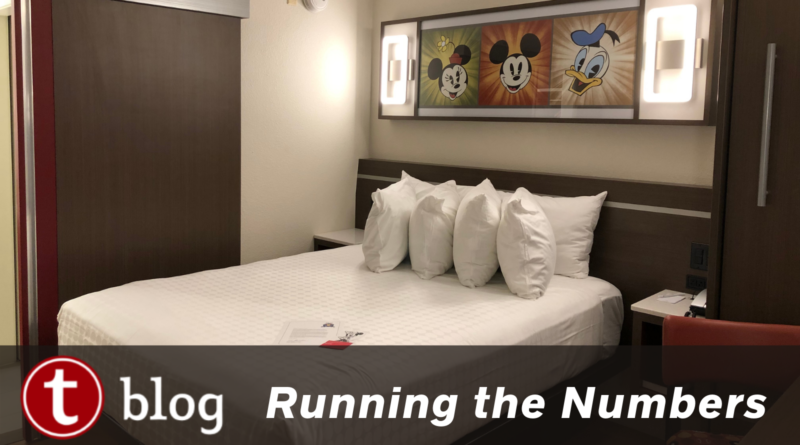 Back in October of 2021, we debuted a new way to look at satisfaction results for every resort at WDW. We used weighted averages to come up with satisfaction scores that better reflected recent experience, and we called them our WDW Resort Power Rankings. Now, arguably, we’re all still living in some sick version of never-ending 2020 and time doesn’t mean anything anymore. On the other hand, experiences at Disney are always changing, and just because you had an amazing (or terrible) time at a particular resort during your last visit, doesn’t mean that you can expect the same thing during your next vacation.

So this week we’re adding in the three most recent months of WDW resort satisfaction data and coming up with the Winter 2021 WDW Resort Power Rankings! We’ll see if any resorts are faring significantly better or worse compared to the fall so that you can make better decisions when you head over to the TouringPlans Travel Agency to have them make the reservation for your next trip!

After every visit to Walt Disney World, you can fill out a post-visit survey that gives us bunches of data to analyze. Specifically for today’s post, we’re looking at resort satisfaction data. One of the sections of the survey asks you to rate your resort (and your specific room) on a variety of different factors. There are some very specific questions, like the quality of the bar or the room size or the bed, and then there’s an overall satisfaction rating. You can answer that question with something ranging from “Very Dissatisfied” to “Very Satisfied”, and there are five different answer options to choose from. In order to compare scores statistically across resorts, I need to convert them to some numerical equivalent. In this case, it makes a lot of sense for Very Dissatisfied to equal 1, Very Satisfied to equal 5, and so on. That way, overall satisfaction can be represented as a number that is the average of all of these scores at each resort.

The concept of the power rankings, though, is to emphasize more recent experiences. Because we know that resorts are always changing – aging, getting refurbishments, having staff turnover, etc. In order to emphasize some scores more than others, we’ll be using a weighted average. That lets me consider all of the scores that have been submitted, but older scores will impact the result less than newer scores will.

For the WDW Resort Power Rankings, we keep the weighting simple. Any review from the past 3 months gets to keep its full weight. It counts as a whole response. But if a review was from more than 3 months ago, we start taking some of its impact away. The weighting system is as follows:

This results in reviews from the past 3 months being six times more “important” than reviews from 15 to 18 months ago. So our Power Rankings will reflect recent scores much more heavily, while still keeping the past in consideration. We’ll be able to compare this winter’s scores to the ones from the fall, and also the ones coming up in the spring to see how things are changing over time.

What are the WDW Resort Power Rankings for Value and Moderate Resorts?

For value resorts … barely anything changes. In the Fall 2021 rankings, we didn’t include the Campsites at Fort Wilderness. But after receiving some feedback in the comments, we’ll be including them moving forward. In both cases, the Campsites come out as the number one ranked Value resort. And they’re the only Value resort that saw a significant improvement in satisfaction from fall to winter. That being said, you’ll know whether or not the Campsites are appropriate accommodations for your traveling party. They’re certainly not for everyone, but they have a devoted fanbase.

The next two Value resorts both saw slight drops in satisfaction. Art of Animation typically rates higher than other Value resorts because of its spacious (and expensive) family suites. The only power ranking that changed from fall to winter was that All-Star Movies dropped below All-Star Music for the first time. The difference between the two is negligible, though. All-Star Sports keeps its ranking at the bottom, and will likely remain there for the spring rankings since it isn’t scheduled to reopen until the end of March.

And for Moderates, we added in the Cabins at Fort Wilderness, which would have secured the 2nd spot in both the fall and winter power rankings. Like the Values, there is only one shift in power rankings for the Moderate resorts. Since both Port Orleans resorts reopened after the fall power rankings were calculated, their reopening scores lead to a distinct drop in satisfaction for the winter. We’ve seen this trend play out at every reopened resort, so it’s not surprising. And the drop isn’t enough to kick French Quarter out of its top spot. But it was enough for Riverside to drop below Coronado Springs into 4th place.

What are the WDW Resort Power Rankings for Deluxe Resorts?

All of these changes mean that a lot of power rankings were impacted. The biggest positive move was made by the Swan, which went from 10th overall to 5th among all Deluxe resorts. This was due in part to its own increase in satisfaction, but also in part due to the fall of many other resorts that had previously been ahead of it. And it makes sense – in a world where on-site advantages are disappearing, Swan keeps whatever advantages still exist, but does it at potentially a much lower price point. It’s an option that’s hard to ignore, especially if you stay at Marriott regularly and have some points to spend. The other big positive winner here is the Contemporary, which moved up from 7th to 3rd place between fall and winter. Contemporary continues to be the Deluxe of choice on the monorail loop.

Jambo House saw the biggest decrease out of the Deluxe crowd. Now, that does hurt my AKL-loving heart. Deeply. After all, Boma has reopened to rave reviews! But, alas, Jambo just reopened near the end of the fall survey period. And like ever resort post-reopening, satisfaction has decreased. It was probably inevitable. Jambo – #8 on the chart, #1 in our hearts (or at least mine). Beach Club and Boardwalk also both saw two-spot decreases, and Yacht Club wasn’t immune from the demise of that Boardwalk area as a whole, with a one-spot decrease. It looks like if you want to stay near EPCOT/Hollywood Studios, the Swan is the new cool place to be.

What are the WDW Resort Power Rankings for DVC Resorts?

Like the Deluxes, DVC resorts see a lot of movement compared to Value and Moderate resorts. Resorts with satisfaction increases include the Villas at Grand Floridian and the Polynesian, Old Key West and Treehouse Villas. Notable decreases happen at Riviera, Copper Creek, Kidani Village and Boulder Ridge.

But are those increases and decreases big enough to impact power rankings? Absolutely they are! Riviera got knocked from the top spot that it held in the fall, and got passed up by both the Villas at Grand Floridian and the Polynesian Villas. For most of the fall survey period, transportation from the Poly was a pain. And recently, studios at the Polynesian received a soft goods upgrade – plus a new queen-sized Murphy bed! All good reasons for increases in satisfaction.

Old Key West saw the biggest climb in the rankings by going from 9th in the fall to 5th in the winter. Oddly enough, though, its weighted satisfaction only increased by 0.04 – up to 4.71. There are just a lot of resorts tightly packed around that 4.70 number so that any slight changes dramatically impact the rankings.

The biggest drop – perhaps plummet – happened at Copper Creek. The decrease in satisfaction isn’t as bad as the drop in power rankings makes it look. The overall weighted satisfaction is still a very respectable 4.70. But increases at Beach Club Villas, and especially at Old Key West, were enough to overtake it. I refuse to accept that Kidani has dropped to 9th place. I need to schedule a visit and stay there so I can give it some spectacular reviews.

Do you have any predictions about what will happen at resorts between now and April? Are you surprised by any of the power rankings? Did you have any personal experience (positive or negative) at resorts since September? Let us know in the comments!