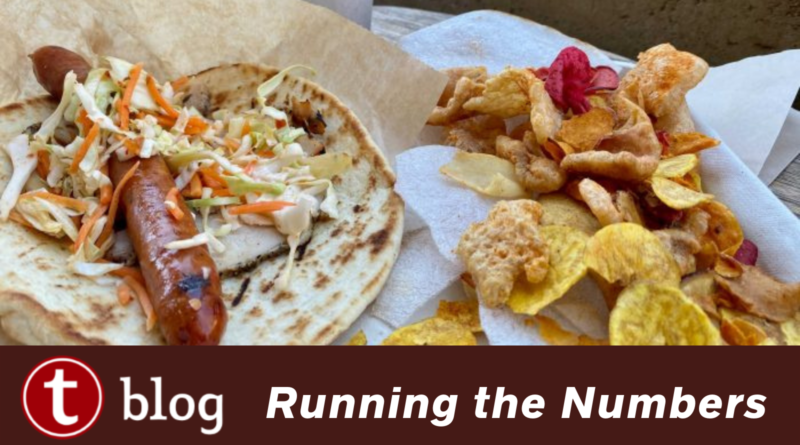 Back in the before-times … no, not those before-times. I’m talking about before the pre-Genie madness of the past couple of weeks. Yeah, those easy times. Back then I started a series of Fall 2021 Power Rankings. First were the WDW Resort Power Rankings, and then the WDW Table Service Power Rankings. And then I got sucked into the black hole of Genie there for a while. But it’s time to get back to some of that important number-crunching to help you make decisions outside of the realm of the Genie.

Quick service locations at Disney World constantly shift around. They change their menus so that your favorites (or least favorites) from past trips aren’t there anymore. They try out new items for special occasions. So how are you supposed to know where you should go on your next trip? That’s the goal of these power rankings. We’ll rank each quick service location across WDW so that you can easily compare across locations. But we also want to take into account recent changes in satisfaction, so we’ll be doing that by mathematically emphasizing the most recent results from our satisfaction surveys. That means you’ll be able to be able to see how locations have been trending (better or worse) recently, and how they compare to other locations too.

Once you take your WDW vacation and then get back home (I hope you used the wonderful TouringPlans Travel Agents), you can fill out a post-visit survey to tell us about your trip. That’s where we pull all of our satisfaction data from for these fun analyses and posts. And one part of that survey invites you to give each dining location that you experienced a “Thumbs Up” or a “Thumbs Down”. Then I can sum up all of that data and group it by the dining location. That lets us see the percentage of responses that were a “Thumbs Up”. And that’s the number that we present as the overall satisfaction at that location.

But that overall satisfaction doesn’t take into account when the survey was filled out. A review from yesterday holds just as much weight as a review from 3 or 4 years ago (in those before-times), if I don’t introduce some arbitrary cut-off. In the ever-changing world of Disney quick-service dining, even a review from a year ago shouldn’t matter as much as a review from yesterday. So for these Quick Service Power Rankings we’re going to use a weighted average. If you already read the Table Service Power Rankings, you know what’s up. If not, we’ll go over it again here.

As with the other Power Rankings, we’re going to keep the weighting pretty simple. We want the most recent reviews to keep their “full weight”. That means they’ll keep their full impact on the final score. But as we go back in time, we want to remove “weight” from those scores so that the older scores have less impact on the final score. We’re going to make our “full weight” window the past three months, and then we’ll implement the following weighting system:

So what does that mean? It means that a review from yesterday (or 2 months ago) have 6 times more impact on the final score than a review from 16 months ago. That translates to a Quick Service Power Ranking that doesn’t ignore the past, but does get impacted more by recent reviews. When we come back to these rankings in a few months, we can see what changes happen to the Power Rankings. And that will give us a lot of new information about recent changes in satisfaction.  For today, we’ll compare the Power Rankings to the all-time average, to see what differences pop up there.

Which Locations are at the Top of the Table Service Power Rankings?

Which Restaurants are Making Positive Moves in the Quick Service Power Rankings?

Which Restaurants are Making Negative Moves in the Quick Service Power Rankings?

Did any of today’s results surprise you? Do you have predictions for big winners or movers in the Winter update? Are you interested how another Quick Service location ranked that I didn’t mention? Let us know in the comments!