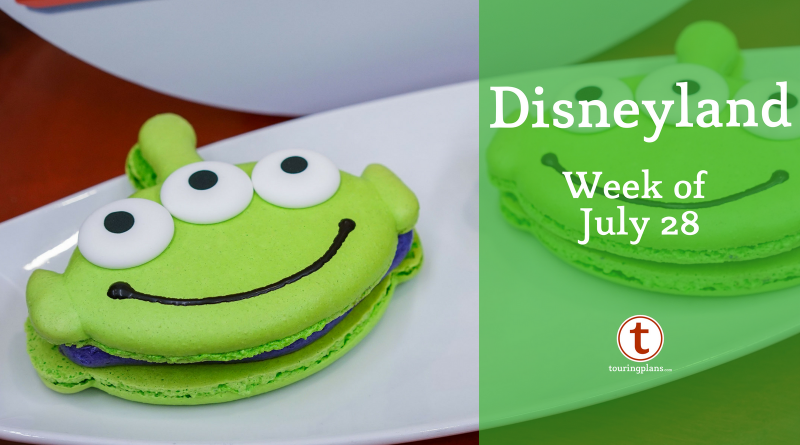 It’s another week of Pixar Fest at Disneyland, plus a Disneyland icon goes on refurbishment! Read on to find out about this and more in this week’s Disneyland preview.

The Pixar Shorts Film Festival is making another appearance at Disney’s California Adventure! You’ll be able to see the “second program” at the Sunset Showcase Theater in Hollywood Land. The three shows will be familiar to anyone that’s a fan of Disney/Pixar films — Bao, La Luna, and Sanjay’s Super Team. Also, they’ll be shown in 3D, so if you didn’t have the opportunity to see them in that format in the theaters, now’s your chance!

Apart from this recent addition to the entertainment lineup, it’s the latter part of the summer and that traditionally means that apart from whatever promotion Disneyland is running for the summer, it’s pretty much business as usual at the parks. That remains the case this year as well. The only special event to speak of this week is the continuation of Pixar Fest, which runs through September 3. This festival includes Pixar-themed fireworks and the Pixar Play Parade at Disneyland Park, and the return of Paint the Night at Disney California Adventure, in addition to other Pixar-focused activities and opportunities. There will also be special dining opportunities available, including Alien Pizza Planet at Disneyland Park. Make sure you check out Rikki’s preview of the Festival!

A couple of re-imagined attractions and the opening of Pixar Pier have given the festival a mid-summer upgrade.  The Incredicoaster (f/k/a California Screamin’) and Pixar Pal-A-Round (f/k/a Mickey’s Fun Wheel) are both back in their updated forms, along with the boardwalk games and other diversions around the pier. Staying with the Pixar theme, Paint the Night received an upgrade in the form of a new Incredibles Float.  Make sure you check out Guy’s review of the new area.

Crowds are high but manageable most days, from a high of a 9 level crowd on Monday down to 7 level crowds on the weekend. Very consistent Southern California weather for this time of year — highs around 90, lows around 70, and no rain in the forecast. There’s really nothing in the forecast that would dictate when to go, so let the crowd calendar be your guide! Big Thunder Mountain returns from its refurbishment just in time to see the Matterhorn go on refurbishment indefinitely. No return date has been announced, but we’ll let you know when we have one.  World of Color remains offline until further notice on account of some “technical difficulties” with its refurbishment — we’ll let you know when we have a better idea of when it will return as well, but we are not anticipating it back until the latter part of the year. All other attractions are currently operational, but as always, be aware that refurbishments can pop up unexpectedly, so check out our refurbishments page for details on exactly what will be down and for how long.

Looking ahead, Tiki Room will be going down indefinitely on August 5. Also, Disney recently announced that “a bug’s land” would be closing to make way for more Marvel attractions at California Adventure. It will be going away for good on September 4, 2018, so make sure you plan ahead if you’d like to see it before it disappears.