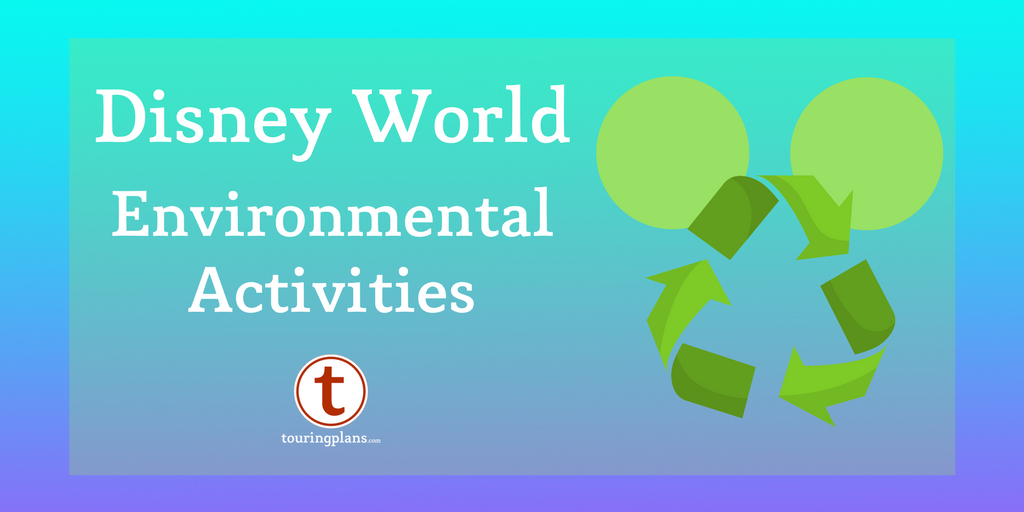 Over at Animal Kingdom Lodge, there are a variety of hands-on activities for all ages to provide educational experiences in conservation. Whether you’re using tracking equipment to learn how wildlife researchers locate animals in the wild for study or creating feeding enrichment objects for giraffes, there’s plenty to see and do. You do not have to be staying at Animal Kingdom Lodge to participate in these fun and educational experiences, but you will need to take some time out of your day to take part, as many of the activities are done in the afternoon. Activities vary daily, and most activities are free. Even better, you can earn a special bead for the activities you participate in.

Behind the Seeds Tour at Epcot

Even without the somewhat heavy-handed Circle of Life movie in The Land pavilion, there’s still a strong environmental theme found with the Living with the Land boat ride. For a more in-depth look at some of the topics touched on in the boat ride, the Behind the Seeds tour is a great way to explore sustainable agriculture, aquiculture, and integrated pest management–all important parts of responsible land use and ways to provide for our growing needs as a society. It is estimated that around eight million metric tons of plastic enter the oceans each year–a true crisis of global concern. By being able to explore life in the ocean (but while on land), we’re able to develop a love of the sea and all the life within it. Although the headliner attractions for the pavilion are the Nemo ride and Turtle Talk, the tanks throughout the pavilion provide a lot of information and unique experiences, including watching dolphin behavior research, manatee feeding, and smaller tanks with a variety of fish and sea life. One of my favorites is the beautiful, yet harmful, lionfish, which are a major threat to sea life and environmental balance. During the spring months, Epcot comes alive with the International Flower and Garden Festival. Although the concerts, food booths, and the gorgeous flower displays and topiaries are a major draw, there are a variety of exhibits, classes, activities, and more to focus on people’s relation to the land around them. From information about backyard gardening to the plight of the monarch butterfly, there’s always more to see and learn. This year, one of my daughter’s favorite activities was painting a rain barrel to be distributed by the Barrels by the Bay organization as part of the City of Orlando’s Green Works initiative. With its abundance of sunlight, Florida is a great place for solar panels. In cooperation with Duke Energy, Disney opened a 22-acre solar farm in 2016. (If you’ve ever wondered what that large field of panels was, visible from the monorail between the Transportation and Ticket Center and Epcot, that’s what it is.) This solar farm generates enough power to power the equivalent of 1,000 homes. Currently, Disney is in the process of planning for a second, much larger solar farm on the western side of property. The new facility, created in conjunction with Origis Energy, will be 270 acres, and will be able to generate ten times the electricity of the current Mickey solar farm. In addition to solar power, Disney also has a focus on unique energy sources by its food waste-powered electrical plant. Harvest Power uses anaerobic digesters to take food scraps and kitchen waste and generate electricity and create fertilizer for use at Walt Disney World. Even better, the scraps that are used go generate energy are not ending up in a landfill. Disney’s goal is to have 60% waste diversion by 2020. Judging by many things I see on social media, some Disney fans love soaps and other toiletries from their Disney hotel stays. But for the open soaps, shampoo, and more, Disney has partnered with Clean the World for many years to keep the open items out of landfills and making a difference around the world. The Clean the World organization collects soap and other hotel toiletries, cleans them, and sends them for use in countries where people may not have access to these life-saving essentials. Over the years, Clean the World has sent 44 million bars of soap to more than 127 countries. In addition, Disney hotels focus on environmental awareness with flyers in the room about conserving water through towel usage (by asking you to hang towels up if you plan to reuse them) and reminding you to turn off the lights when you leave. These colorful flyers are a great way to start a discussion with your family about ways to conserve resources not only at the hotel, but also when you get home.

Although Animal Kingdom may be the flagship of Disney’s environmental focus, the commitment to the environment is something that exists throughout Walt Disney World. It truly is a way where Disney helps make Earth Day every day.

One thought on “Disney’s Environmental Activities: Beyond Animal Kingdom”