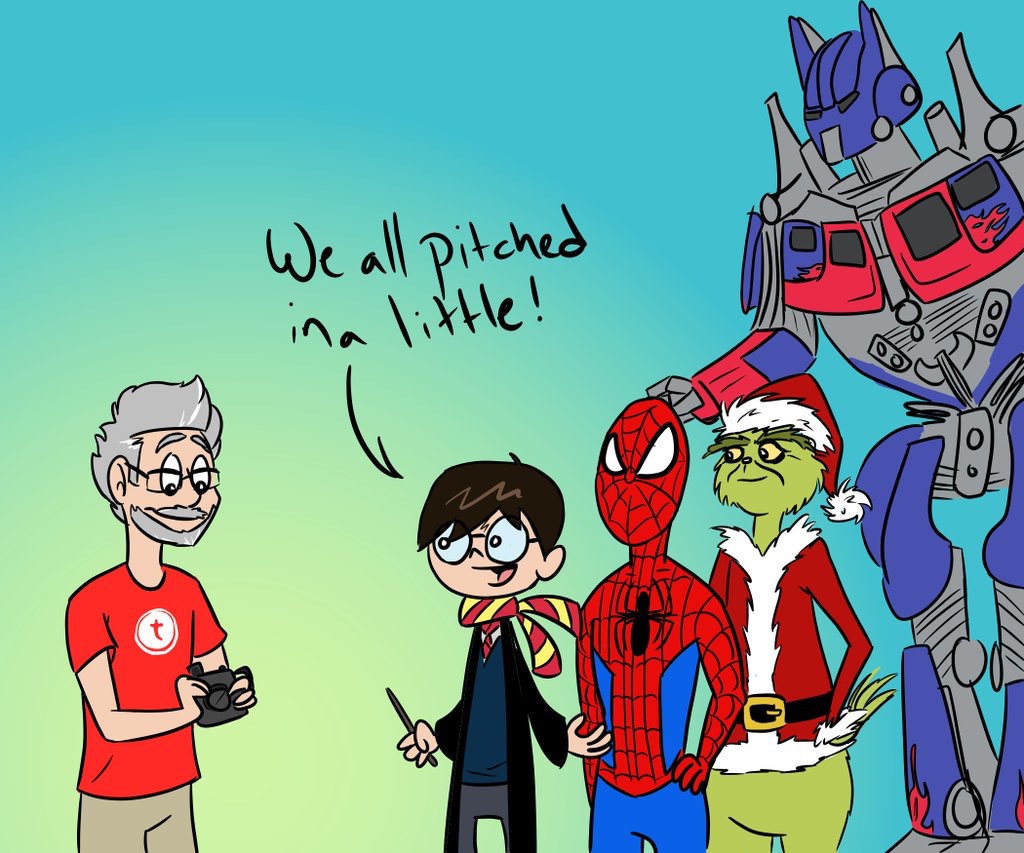 The confetti is still everywhere and no one has had the heart to take the lampshade off James’ head, but, sadly, our TouringPlans Blog Annual Christmas party has come to an end. In the time-honored tradition of office parties from Scranton to Springfield, we of course had to include the Secret Santa gifts. We drew names and picked out the best of the best for our co-workers. What did the Holiday Armadillo bring Julia? Did Angela finally air her grievances about Tammy? And what about the love that dare not blog its name between Seth and Derek? Read on to find out what we’ve given our co-workers this year.

To Seth from Derek:

When I received Seth Kubersky’s name in Secret Santa, a smile grew across my face a mile wide and I knew exactly what I was going to get him. A literary legend, Seth has written many books on the theme park world, including The Unofficial Guide to Universal Orlando. A wordsmith of the highest order, Seth has been known to bring grown men to tears waxing poetic on normally banal subjects such as Green Eggs and Ham in Seuss Landing.

However, as much as it pains me to admit it, there is one small shame in his game: pictures. But, thanks to this Secret Santa project – along with my brilliance and extreme humbleness – I could fix that one flaw.
I knew that this wouldn’t be easy. The camera I would need to get would be beyond the mere means of a simple theme park blogger. I had to recruit some help. So I went to all the Universal characters that Seth has photographed over the years and pitched them my idea. I was going to get Seth a new camera.

Not just any camera, the Nikon INCREDIPIX 5000. This is a camera so incredible that it even makes the boring National Park pictures taken by celebrity photographer Tom Bricker look great. I also wanted all the bells and whistles: 18-700mm, 250x ZOOM, and of course the built-in Wi-Fi and Keurig Kold. Most important of all was the patented Glover Lever, which makes any photo taken have the same quality of those by SATURDAY SIX staff photographer Brandon Glover.

Because everyone loved Seth, getting the huge sum of money needed for this camera was actually no problem at all. I even had enough left over to get Seth a camera bag from Amazon. We all want to thank you, Seth, for everything that you do and hope you have a VERY Merry Christmas. To Len from Seth:

Now that Walt Disney World has begun renting private in-park cabanas to any schlub with seven bills in their pocket, what perk could possibly be worthy of Len Testa?

How about an uber-exclusive personal restroom inside an E-Ticket attraction?
Len already has a Disney Cruise Line Rainforest Spa-themed bathroom at home, so I’d build a first-class water closet just for him right inside his favorite Magic Kingdom attraction, Splash Mountain.

Disneyland’s Matterhorn may have a basketball hoop, but Len’s Zip-A-Dee-Doo-Loo will have a commode with a commanding view from atop Chickapin Hill; a whirlpool tub surrounded by the Laughing Place’s jumping fountains; and a shower built into the waterfall just before the riverboat finale. If you ask nicely, Len will even toss free H2O bath products to passing logs.

To Derek from Kristi:

So what do you get a theme park fanatic like Derek Burgan that has everything? Seriously folks, do you read his “The Magic, The Memories and Merch” posts? This guy buys more Walt Disney World souvenirs than I do and that’s saying something. I’m actually shocked there’s anything left after he leaves the outlet stores! Rising to the challenge, I enlisted two Christmas elves (aka my tech savvy kids with way too many days off at Thanksgiving) to help me (stalk Derek online) find the perfect gift.

A JAMMitors drum roll please…Derek, for your Secret Santa gift, I present to you a Six-In-One Personalized Theme Park Tool! Just like your fan favorite “Saturday Six” posts, you are sure to love this gizmos six useful gadgets. Your “Derek” embossed theme park tool includes:

I hope you enjoy your Six-In-One Personalized Theme Park Tool as much as we TouringPlans’ bloggers and readers enjoy your posts. Happy Holidays from your Secret Santa – Kristi Fredericks!

To Tammy from Alex:

Tammy gives us the gift of her fantastic insights about Disney Cruise Line all year long, so I would send her on a Christmas Disney Wonder cruise.

No trip is complete without a relaxing trip to Senses Spa and I’m including full access to all treatment rooms and a pedicure to make her toes Instagram worthy before the ship stops at Castaway Cay. Prepare for super cute sandy feet pictures!

Also, a selfie tour of the ship with the captain would be organised. I love how Tammy is always taking selfies wherever she goes and during whatever she does! The captain would take her and her family up to the bridge to snap some special selfies, and give her a guided behind the scenes tour complete with a photo album at the end filled with all of these one of a kind moments. The photo album would be presented over dinner at the Captain’s table. What a cruise!

Have a super Christmas, Tammy!

That’s it for Part One – tune in tomorrow to read more!