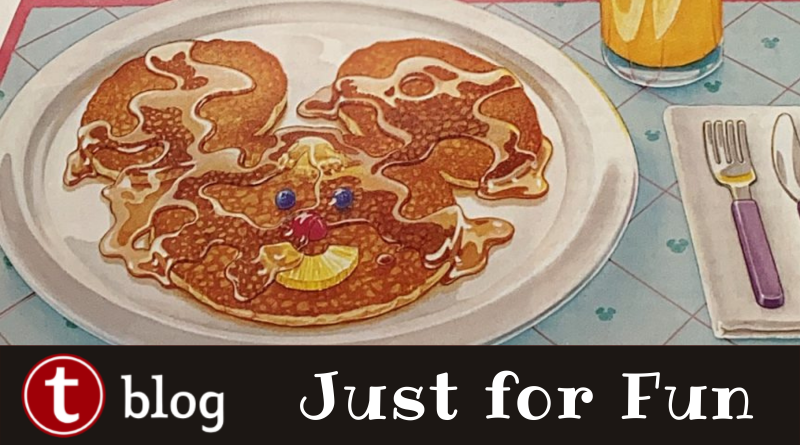 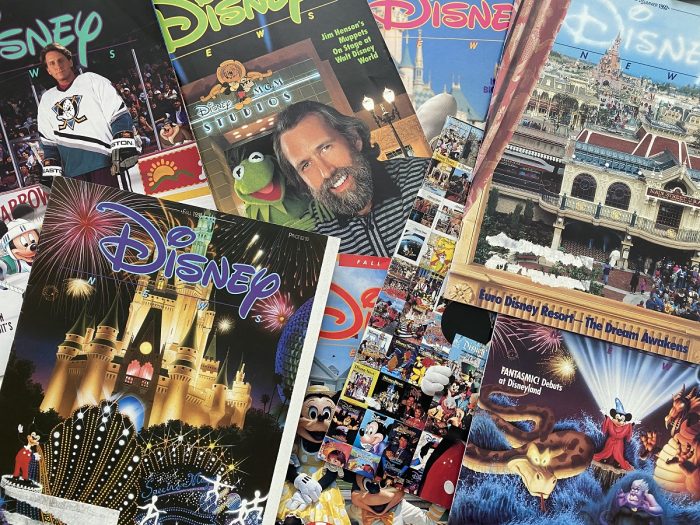 Today I’m digging back in to my stash of Disney News Magazines from the 80s and 90s to bring you five vintage theme park recipes from Disneyland, Walt Disney World, and Tokyo Disneyland. If you’re not aware, I’ve written several posts with vintage ads from the old Disney News issues, including my personal favorite, one entirely made up entirely of ads for ancient rental cars. I’m very excited to share with you these old recipes, as this feature was a staple of the magazine for many years. Each month the staff would pick an a restaurant from one of the Disney parks around the world and highlight an item from the menu with some history and instructions about how to prepare it for yourself. How cool is that? 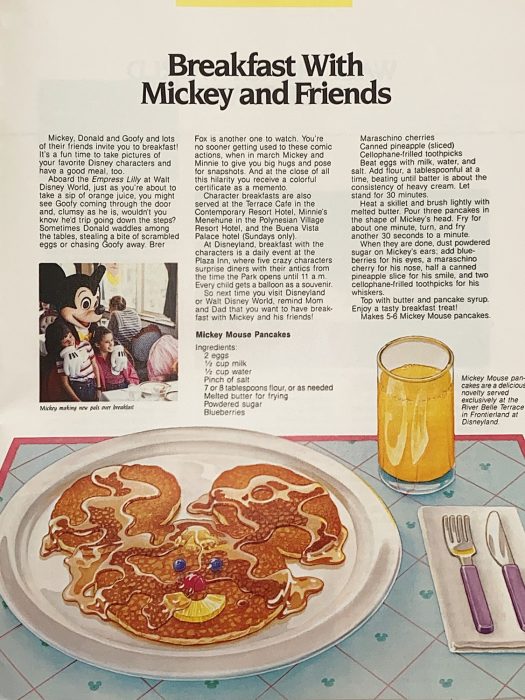 Starting off with an all time classic Disneyland food, which is still served in the park to this day, the iconic Mickey Mouse Pancake. According to this post by Jason Schultz, the earliest mention of the Mickey Mouse Pancake being sold in Disneyland was summer of 1975. As far as I’m aware it consistently been available since then, although it has switched restaurateurs in recent years. Its former home for decades was River Belle Terrace, which was a quick service restaurant up until 2015. The pancake was then briefly moved to Rancho Del Zocalo before landing at Red Rose Taverne, where it’s available for $9.49. If you’re familiar with the Mickey Mouse Pancake you can look at the page from Disney News and see it hasn’t changed one bit. Mickey Mouse Pancakes are still served with a pineapple mouth, cherry nose, and blueberry eyes. This is a nostalgic breakfast for millions of Disneyland visitors over the years, so it’s safe to say it’s not going anywhere any time soon. 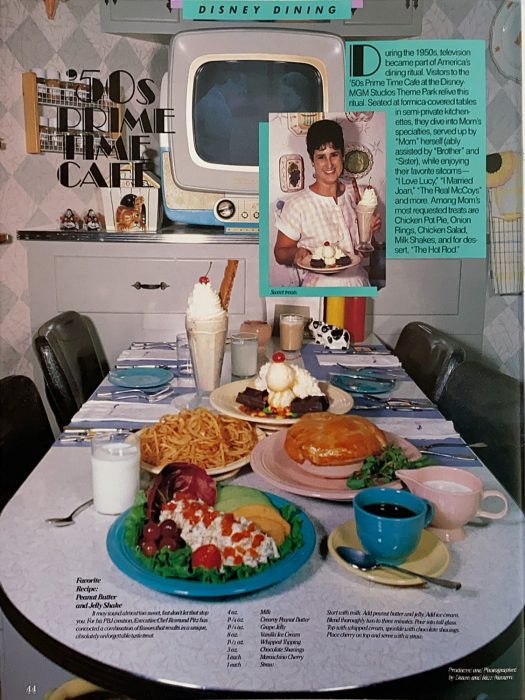 LOOK AT THAT HUGE PILE OF FRIES. Sorry, got distracted. Anyway, if anyone knows one thing about 50’s Prime Time Cafe, it’s that they have a peanut butter and jelly shake. As this scan from right after Disney-MGM Studios opened shows, it’s been on the menu since day one. That’s an impressive 31-year run so far. Earlier this year Disney posted their official recipe for the shake on Disney Parks Blog. Let’s see how it matches up to the one listed on the page:

It looks like the 1989 version had slightly more peanut butter, jelly, ice cream, and milk, as well as additional toppings like chocolate shavings. Fascinating. 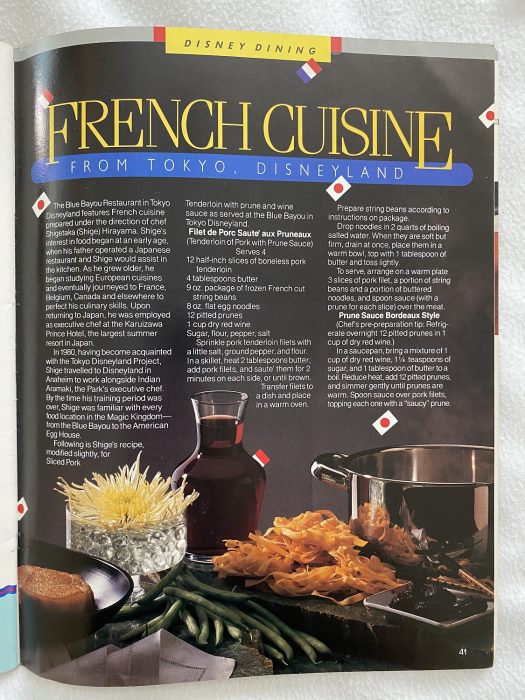 French food exploded in popularity in Japan in the 1960s, so it’s no surprise that Tokyo Disneyland has offered this style of food for most of its existence. The park’s Blue Bayou Restaurant is almost an exact copy of the location found in Disneyland, but what I find more interesting is that chef Shigetaka Hirayama traveled to the U.S. in 1980 to train at the original Disneyland in preparation for Tokyo Disneyland’s opening. I’d love to hear more about this person’s story, but I can’t find any mention of his time at Disney. Anyway, this recipe sounds delicious! I can’t imagine many readers tried to replicate this one at home but I sure hope they did. 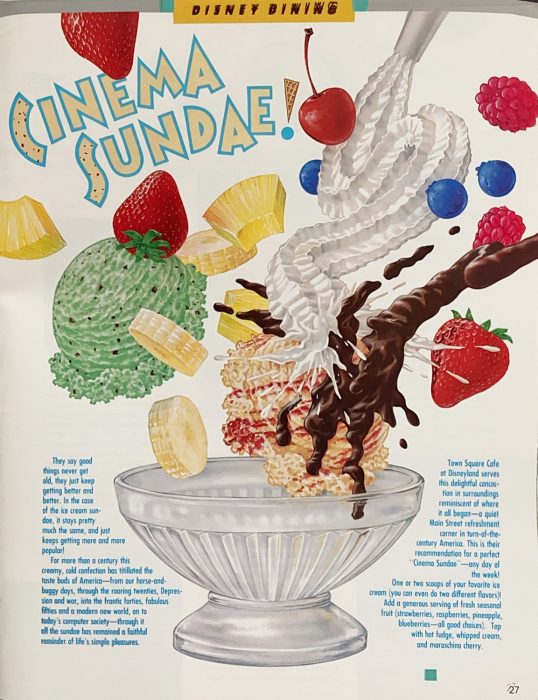 Here’s an extinct Disney food item from an extinct Disney restaurant. Town Square Cafe was a restaurant located on Main Street, U.S.A. where the Disney Showcase shop currently is. The restaurant started out as Maxwell Coffee House, and then Town Square Cafe 1976 to 1978. It then became American Egg House 1978 to 1983 (the cash register booth inside the current store used to be the egg cooking station). Town Square Cafe returned in the same spot in 1983 and ran until 1992. Stuff From the Park posted this menu from 1987, and you can see nothing too exciting was offered here. Just the usual burgers and salads. You can also see the price of a Cinema Sundae was $2.50. Not bad! 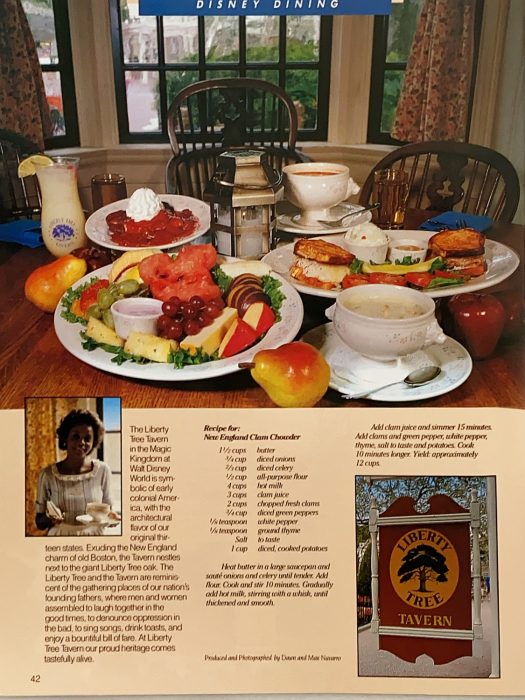 I really enjoy clam chowder but the thought of slurpring down a bowl of hot heavy cream-based soup and then walking around Magic Kingdom with that Florida sun pounding down on me is giving the shivers. With that being said, Liberty Tree Tavern is currently a solid dining location and the Ooey Gooey Toffee Cake is wonderful. Clam chowder isn’t on the menu anymore, as is anything else in the picture above but it still looks like a good spread of food.