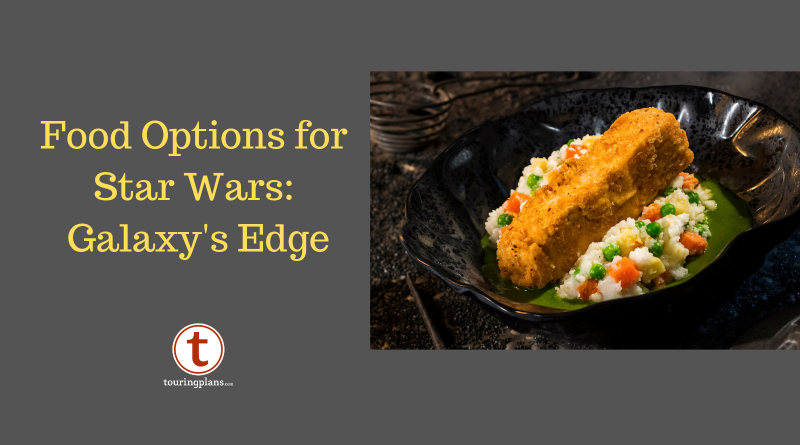 When you’re smuggling droids across the universe, you’re bound to work up a mighty appetite. And just our luck, there will be a restaurant to feed us when we’re hiding out in the Star Wars: Galaxy’s Edge Black Spire Outpost on Batuu. (Side note: Personal high-five for me because I just spelled Batuu correctly for the first time without having to look it up. Wooot!)

The Black Spire Outpost restaurant is called Docking Bay 7 Food and Cargo. They specialize in “farm to table” style whole foods, influenced by ancient cooking traditions. And good news! You’ll be able to mobile order your meals here so you won’t have to lose valuable minutes away from your time devoted to overthrowing the Rebellion.

(For an explanation of the “Disney Check,” see our WDW kids’ quick service FAQ.)

There are drinks aplenty in all areas of Batuu (spelled it right again!). I’m revved up for some Moof Juice.

Do you have your first order planned already? Are you wondering what language “yobshrimp” is in? Are you old enough that the word “Endorian” evokes not only the Ewok’s home planet, but also matriarch Endora on “Bewitched”? Let us know in the comments below.

5 thoughts on “Food in Space! What You Can Eat in Galaxy’s Edge”