It has been almost a month since our last post on Hotwire deals and I’m sure you all have been waiting for more with bated breath. Well, now you can breathe freely again as another drop of deals has finally appeared for March!

Before we go over the current deals, I’ve got a few pieces of news that might help you in the future.

We’ve spoken of these non-deal deals before, but I keep seeing more of them so I want to make sure everyone is aware: Both Priceline Express and Hotwire add their own fees to hidden deals, which is fair enough. But, if you see a hidden deal in the area of 11% off (seems to be a magic number that appears often), you will find that the combination of normal room tax and these fees can easily make the all-in rate more than Disney’s discounted rooms.

So: Always do the math. (Added bonus: I do some math below for you on actually good deals.)

Some time last month, Hotwire decided that the Quality Inn & Suites Kissimmee by The Lake had somehow levitated into the Bonnet Creek area. Previously it would appear in results for the Disney Main Gate West area on both Priceline and Hotwire.

To be fair, it is *right there* on the Bonnet Creek line. Anyway, no worries: just be aware that you may start seeing a 3-star 4.0-rated resort in hidden deals in Bonnet Creek which will often have super low rates. That and the 4.0-guest rating are a clear tip off we are not looking at an All-Star resort, Pop Century, or Art of Animation. (The Disney resorts all have guest ratings 4.2 and above.) For your viewing pleasure, behold a nice example of a Quality Inn HotRate, which happened to be followed immediately by a non-hidden deal:

Airport Shuttles: What’s Not to Love?

While this post is about some Hotwire deals, I’m going to jump over to a Priceline tip for a second.

Sadly, you may have heard that Disney has announced that the Magical Express bus service will end in 2022. But, for now it lives, and still appears as an amenity on many Disney resort hidden Priceline Express deals. I noticed a little trick recently that may help squeeze a few more deals out of the system for you. Normally when I search for Disney resort deals, I filter results for Bonnet Creek and/or Disney Springs as well as just 3 and 4-star resorts. While you’ll still see non-Disney resorts appear in results with those filters, it minimizes the number.

While helping someone identify a deal recently, they kept reporting a 4-star resort with 300 reviews – but I wasn’t seeing it in my results at all, even as one of those additional pop-up deals Priceline springs on you when you click on something. Long story short: I found that by adding a filter for Airport Shuttle in amenities squoze out the deal I was missing!

(Funny aside: it turned out to be an Animal Kingdom Lodge Express Deal that was neither a good deal (11% off!), or likely even existed, since that resort is not yet open. Priceline is weird.)

Moral of the Story: Might be worth toggling the Airport Shuttle amenity on and off to see is more deals shows up.

Now that the tips are out of the way, here’s the lowdown on the deal situation: the March HotRate deals can save you a nice amount per night. Below are some comparisons  of the all-in hidden deals costs vs Disney’s current discounts. 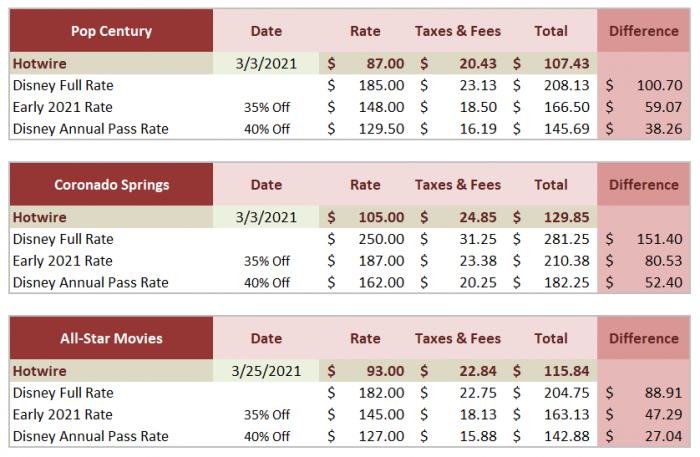 The complete month of deals is scientifically designed to fill your eyeballs with the warmth of HotRates at a glance. 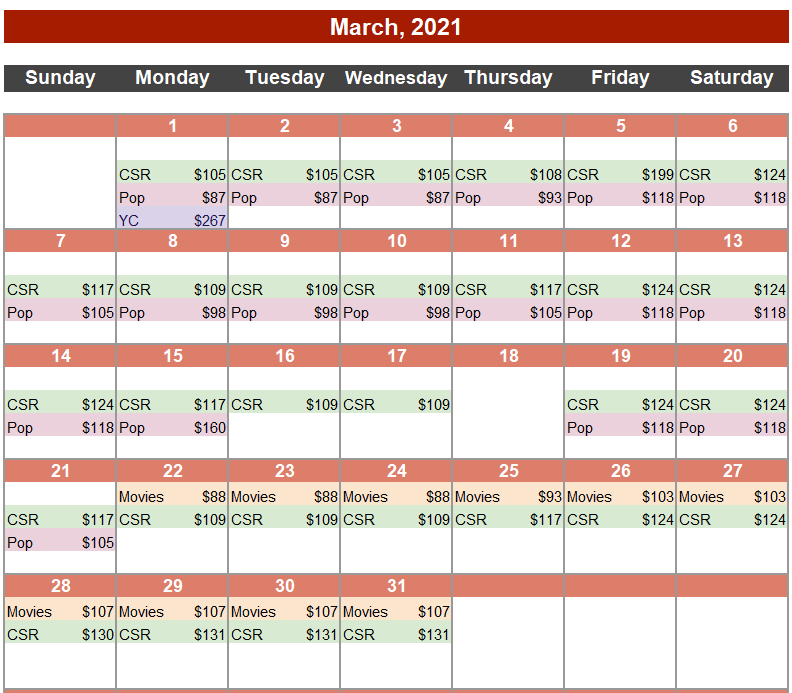 If you’d like to see some examples of what Coronado Springs and Pop Century look like in hidden Hotwire deals, you can pop right over to our January post for a look-see. Below is an All-Star Movies example that should help you identify one of those deals.

At the time I write this post, All-Star Movies was a 4.2-guest rated resort. But as of Valentine’s Day it has jumped up to be a 4.3-guest rated resort on Hotwire. However, it may still appear as 4.2-guest for another day or three while their systems sync up. I am leaving the paragraph below this one in place for posterity as guest ratings fluctuate and that info might be useful again later. But, for now: the other 3-star 4.3-guest rated resort in Bonnet Creek are All-Star Sports (not open now) and Art of Animation. Long story short, you can still Movies and AoA apart on Hotwire by comparing sub-amenities, which I think I’ll have to go over in a future post.

Note that All-Star Movies and Music are both 3-star 4.2-guest rated resorts on Hotwire right now and they have similar review counts (1,058 and 1,000 respectively.) So, in normal times (what are those?) you might have to do a little more work to identify which one a deal is for. But, these ain’t normal times: All-Star Music resort is not open, so if you see a 3-star 4.2-guest resort in Bonnet Creek right now, it pretty much has to be a Movies deal.

I hope this post provided some more tools to help you feel comfortable identifying Disney resorts – if you score any deals in March, let us know in the comments!

One thought on “Hotwire Deals for March”