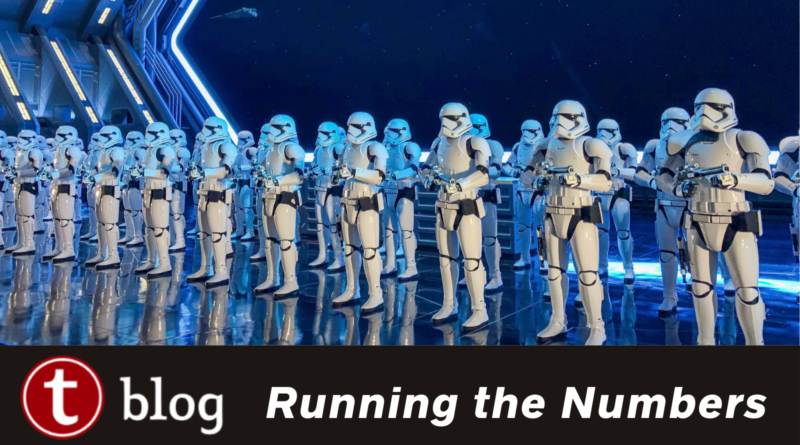 Last week, I posted our first analysis of Genie time savings and availability at Disneyland. Spoiler alert if you haven’t read it – time savings at almost every eligible attraction are decent, and availability is a breeze. This week I’m mashing those two analyses together to give you and idea about how much time you can expect to save at each park under various crowd conditions on any given day.

You can look up an almost identical analysis for the WDW parks here. I’m not going to bury the lede on this one. The results from last week make it pretty clear that Genie+ is much easier to use at Disneyland. And individually each attraction still has good time savings compared to standby. So it should surprise no one that the overall results show much better time savings per park through lots of crowd conditions when compared to any of the WDW parks.

All of the details about the math can be found in last week’s post. This week is just about combining those two detailed datasets:

The real question that we’re trying to answer is this – how can we take what we know about time savings at each attraction, and then contextualize it with information about return time availability and how it shifts throughout the day?

This question was really difficult to answer at WDW – because at the parks where you can save the most time for individual attractions, reservations book up really quickly. So you have to pick and choose which ones you’re going to use in order to maximize your overall savings.

At Disneyland, we find a much happier place. In almost all scenarios, you’re going to be able to use every Genie+ options available to you throughout the course of the day. A lot of the time, it won’t even be difficult to accomplish. And on some low crowd days, it’s feasible to use all Genie+ options at both parks in a single day. But for now, we’re going to say that you’re sticking with one park per day.

Note: this post accounts for all current Genie+ offerings as of March 14th, 2022. If things change significantly in the future, that will require new calculations.

How Much Time Can Genie+ Save Me At California Adventure?

The colors on these bars relate to the various time savings conditions at WDW, so the fact that we already have two green bars is a good sign!

How Much Time Can Genie+ Save Me At Disneyland?

A whole graph of greens! That is something we’ve only seen once before – at Magic Kingdom. It makes sense, because Disneyland’s Genie+ profile is roughly similar to Magic Kingdom’s. Lots of options, which helps with availability. Some save a lot of time, and others have only mild savings.

Have you used Genie+ at Disneyland? Are you a Florida fanatic that sees these numbers and seethes with jealousy? Do you have other Disneyland Genie+ questions? Let me know in the comments!

6 thoughts on “How Much Time Can Genie Save You at Each Disneyland Park?”