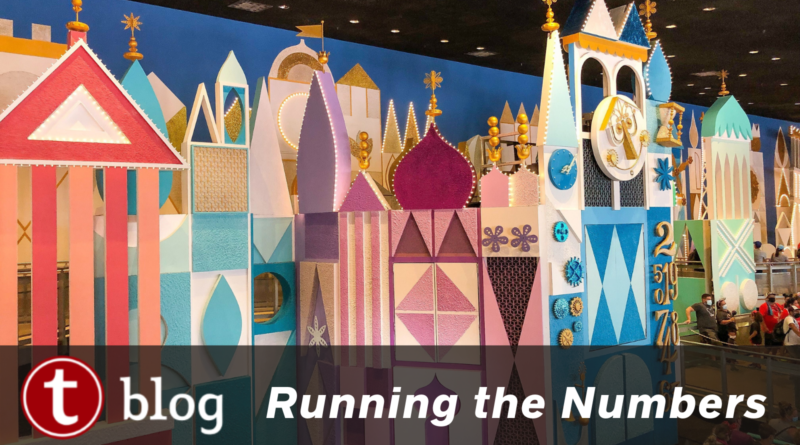 If you’ve been following along here …. at any point since last October, you know that we’ve covered a lot of Genie+ data. And we’ve been helping you see how to use that data to make the best decisions possible about whether or not to purchase Genie+, and how to use it wisely if you do decide to purchase. This post is a big important summary of all of that detailed information. We’re gathering everything together to figure out how much time you can expect to save at each park under various crowd conditions on any given day.

The last time I updated this article was in July and SO much has changed since then. Decreased demand thanks to no pre-purchase and increased crisis means lots more availability. And wait time savings have gone down a little across the board. So how does this all add up? How much time can you expect to save during a full day in each park? Let’s take a look! (Last updated October 19, 2022)

Today is all about combining the data from two different sources:

The central question is this – how can we take what we know about time savings at each attraction and make it more realistic by contextualizing it with information about return time availability and how it shifts throughout the day.

We know things like on high crowd days, while Genie+ will allow you to skip those really long standby waits, the reservations will book out more quickly. Compare that with low crowd days, when you might be able to get every Genie+ reservation that you could ever possibly want … but wait times are also low anyway.

In the real world, we know that there will be a “sweet spot” where you find the ideal balance between Disney’s constrained supply of Genie+ reservations and the standby wait times that you’re going to try to avoid. But what does that look like when it plays out during a day in the parks? That’s where we have to start making some assumptions.

Every human is going to have different preferences on how (or whether) they use Genie+. Some like to go for the stacking strategy (book all of your reservations as late in the day as possible and live your best life in the afternoon and evening walking past everyone), while others want to just churn through as many book now/ride now opportunities as possible. Some will use Genie+ on their favorite rides, regardless of actual time savings, and others will stick strictly to what will help them avoid the largest standby waits.

This post tries to replicate the most savvy strategy for using Genie+. That doesn’t mean it will exactly replicate how you would behave. But it means that we assume the theoretical Genie+ user will be going after the attractions with biggest time savings first, and then proceeding with their day based on the Genie+ rules and what is still available when they check to get their next reservation. It also means that they won’t have super-speed hacks for booking that allow them to check back every 2 minutes for cancelled reservations. Normal behavior.

One last note: This article accounts for all current Genie+ offerings as of October 19th, 2022. If things change significantly in the future, we’ll do new calculations.

Animal Kingdom used to have the least variability in time savings across different crowd levels – no matter what the crowd conditions were, you were going to be able to save somewhere right around 100 minutes. This has changed as demand for Genie+ at Animal Kingdom has actually decreased, and availability has gotten better – especially at Kilimanjaro Safaris, which can stay open later with the later sunset.

We’re going to start at the park where Genie+ has generally had the least usefulness, and work our way up.

EPCOT is a tricky park for using Genie+ because there are relatively few rides (cough-three-cough) where it will save you a lot of time, unless the park is insanely crowded. It’s also the park with the biggest distance between most attractions. So a lot of Genie+ users bail out of making reservations, unless something nearby has real-time availability, or something in the future lines up geographically well with another existing reservation.

Magic Kingdom is the most approachable park for Genie+ because the large number of eligible attractions means less strategy and savvy timing are needed to unlock big savings than at other parks.

Since Magic Kingdom has more attractions, it doesn’t feel the pain of high demand as quickly as Hollywood Studios does. And, in fact, decreased availability doesn’t eat up the bigger time savings at the highest crowd levels.

Want all of this data explained to you? Check out Episode 102 of TouringPlans Teaches on our YouTube channel. Do you have experiences using Genie+ on high crowd level days? What was your strategy? Let me know in the comments!

20 thoughts on “How Much Time Can I Save with Genie+ at WDW?”