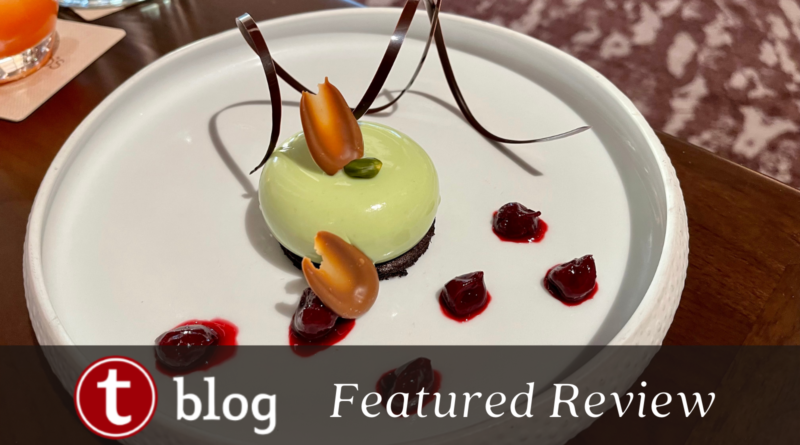 Topolino’s Terrace is the Riviera Resort’s rooftop restaurant that’s named after the big cheese himself – Mickey Mouse – who is known as Topolino in Italy. 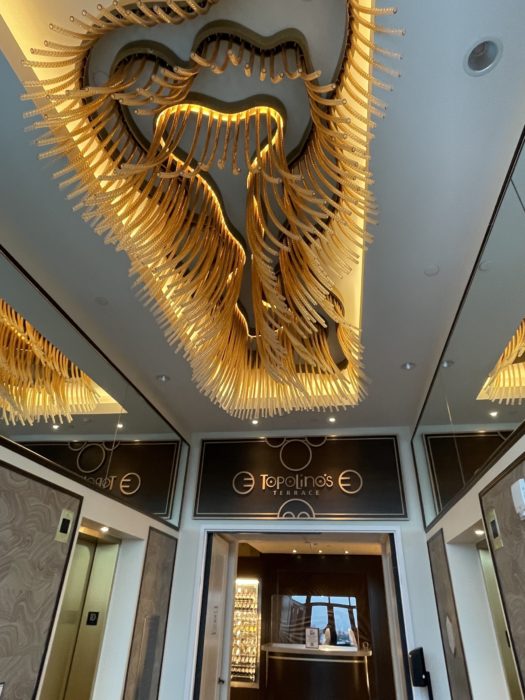 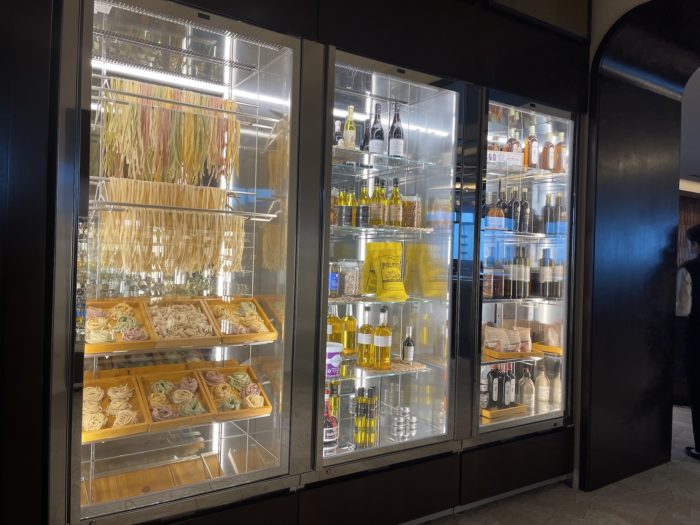 Plus, its rooftop location offers gorgeous views from the center of Walt Disney World. When fireworks return to EPCOT and Hollywood Studios, Topolino’s will be yet another awesome place to catch the show!

Also, the Riviera Resort just happens to be a Skyliner resort making it even easier to visit from EPCOT or Disney’s Hollywood Studios.

Topolino’s Breakast a’ la Art with Mickey and Friends offers a prix fixe menu and with Mickey, Minnie, Donald, and Daisy in themed, artistic outfits like that of an artist or sculptor. But like most character meals currently offered at Walt Disney World, the character experience is still socially distanced.

And for dinner, Topolino’s rolls out a menu of seafood, pasta, and more prepared at its exclusive expo kitchen or wood-burning grill.

Despite being a rooftop restaurant, service is only available for those sitting inside. The Terrace is open and has chairs available, but the outdoor bar has yet to reopen. The indoor bar is open and doesn’t require reservations but is available on a first-come, first-served basis.

In our experience, it was never full and the entire menu was available. But be wary when planning to visit for the bar alone as you need a dining reservation to park on at the resort.

For those looking to check out Topolino’s Terrace, we strongly encourage booking Advance Dining Reservations (ADRs) at least 60 days out. But if you’re already within that window, consider using the TouringPlans Reservation Finder. 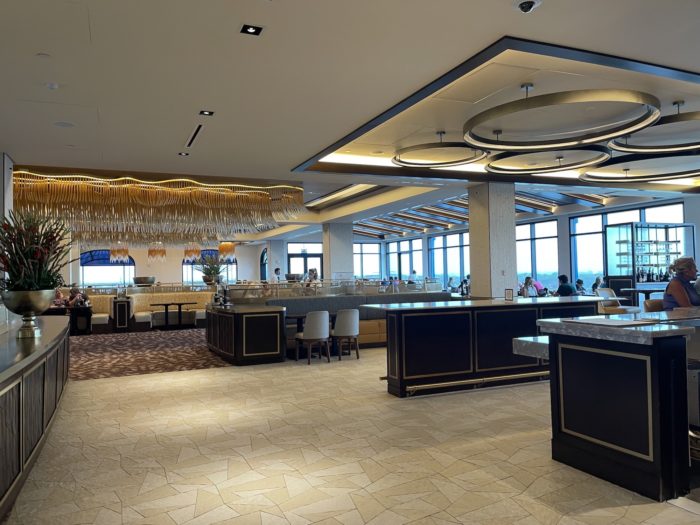 Something else to note is the dress code for Topolino’s Terrace. Guests are asked to adhere to the minimum requirements which is khakis, slacks, or dress shorts and collared shirts for men. Women must wear capri pants, skirts, dresses, or dress shorts. Jeans are permitted for both men and women but only if in good condition. Tank tops, flip-flops, swimsuits and cover-ups, hats for men, cut-offs, torn clothing, and t-shirts with offensive language and/or graphics are not permitted.

But in our experience, the code wasn’t as strictly enforced as we saw everything from cocktail wear from a bridal party to post-park hot mess, and everyone was treated the same.

While the character breakfast is understandably popular, our in-park reporter Chrissy visited Topolino’s for dinner to determine if its fare was on par with the refined restaurant vibe. Here’s what she found out.

Topolino’s menu is broken down into drinks, antipasto, starters, hand-crafted pastas, seafood and meats, and desserts! 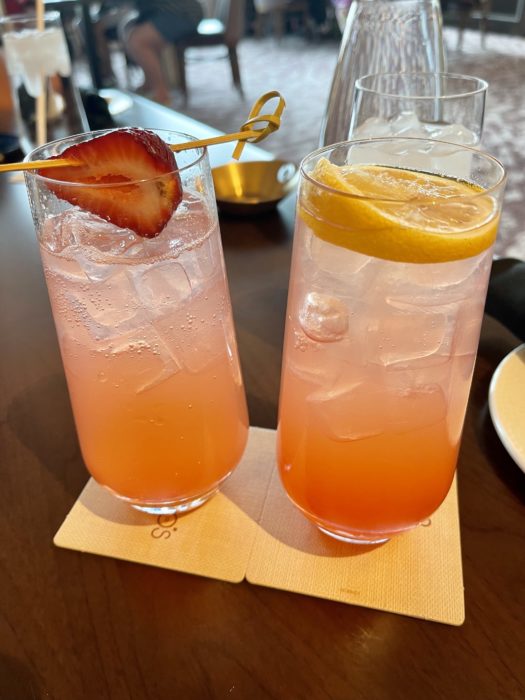 While there’s a wide selection of alcoholic drinks, Topolino’s also offers two non-alcoholic cocktails – the Strawberry-Cucumber Spritzer and Pomegranate Dip Cooler. Both were priced at $5.49 each and just look and taste so special that they’re worth the extra charge. 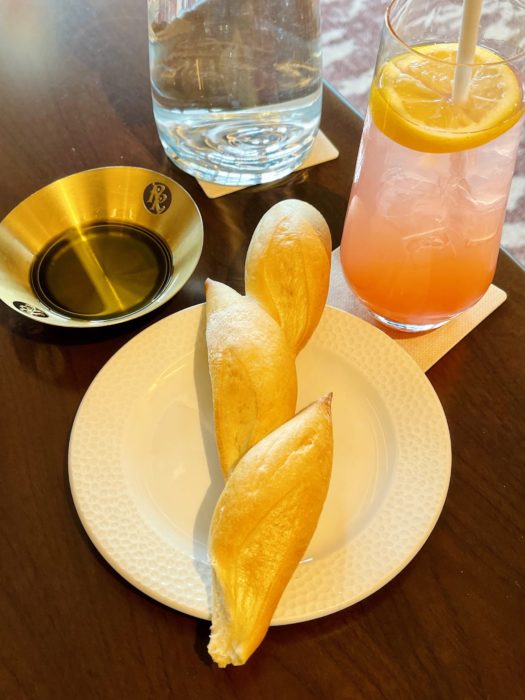 Next up is the bread service which Chrissy says is enough for a good meal all on its own! The bread was fresh and warm and served with heavy, fruity olive oil. It was art all by itself! After all, it’s so nice when something so simple is presented in a special way – signals right away that you’re in for a treat! 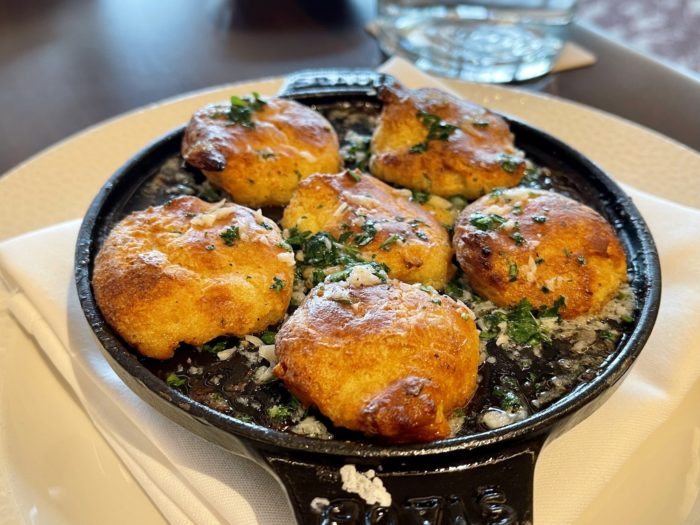 Listed as a savory Pâte à Choux, butter, garlic, lemon, and parsley, Chrissy says this was truly amazing. She’s had snails too many times at various EPCOT festivals, and not once have we made a fuss over them. But this starter is in her top 10 in all of Walt Disney World.

Expect heavy butter, tons of garlic, soft and perfectly baked choux pastry, and a tender snail in the center. Nothing chewy or rubbery about it. She was fully braced not to enjoy it because, well, snails. But it was possibly the best thing she had all night and there’s a lot of great stuff to come. She cannot recommend it enough.

Oh, and if you’re looking for a hack, save the butter in the cast iron pan for dipping your bread in! 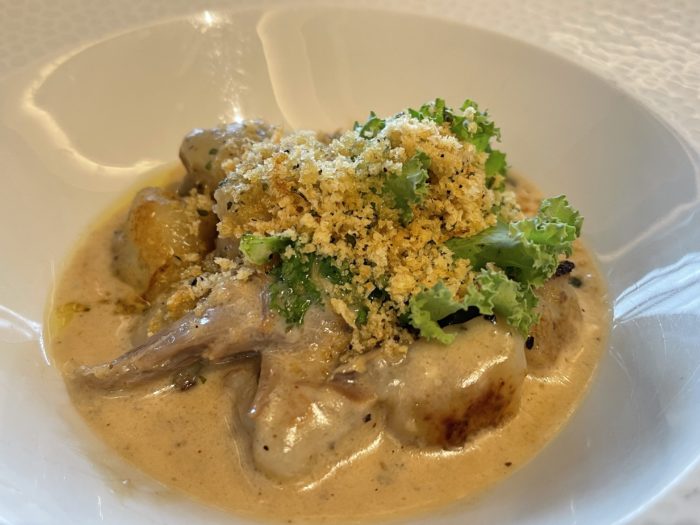 Chrissy says the super tiny portion makes sense when you taste how rich it is. A huge portion simply wouldn’t be manageable. It was delicious, but not her favorite of the evening. It simply tasted too much like something you would get at a festival. 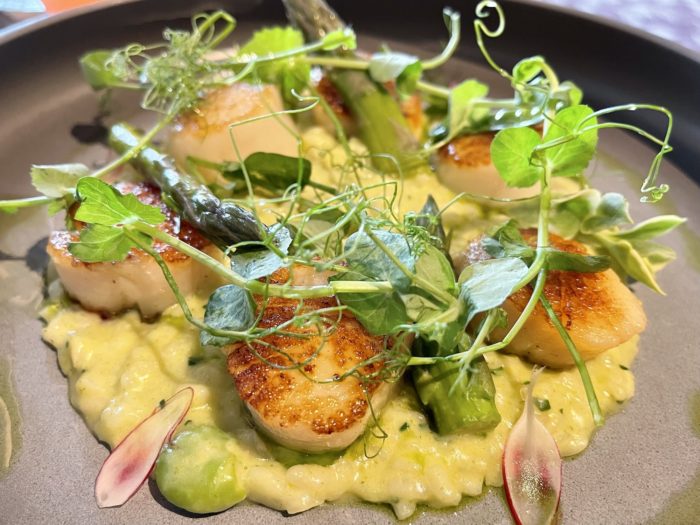 This dish is listed as Diver Scallops with Spring Vegetable Risotto, Asparagus, Emerald Crystal Lettuce, and Meyer Lemon Oil, and it was Chrissy’s personal favorite item of the night! The sear was perfect, and the risotto was just so unusual, bright, and wonderful.
She says when she goes back on her own, she’ll get this, a garlic bulb (more on that in a second), and the bread. 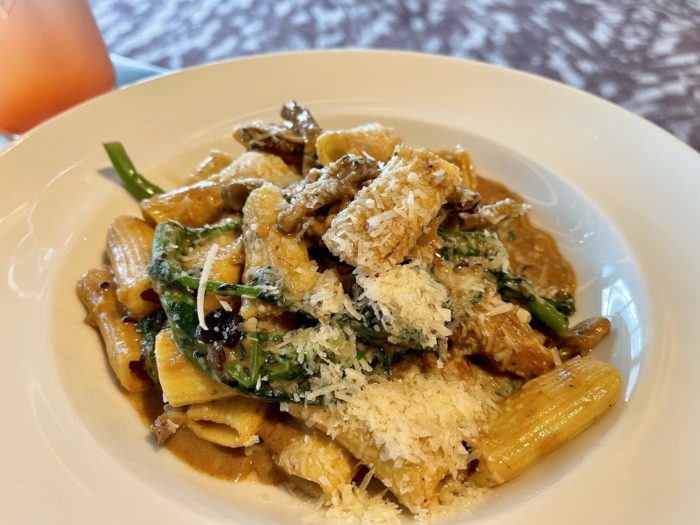 Basically, this was a family-sized portion of house-made pasta and cheesy mushroom goodness. The menu describes it as Rigatoni with Braised Chicken Sugo, Broccolini Rapini, Wild Mushrooms, and Parmigiano-Reggiano. 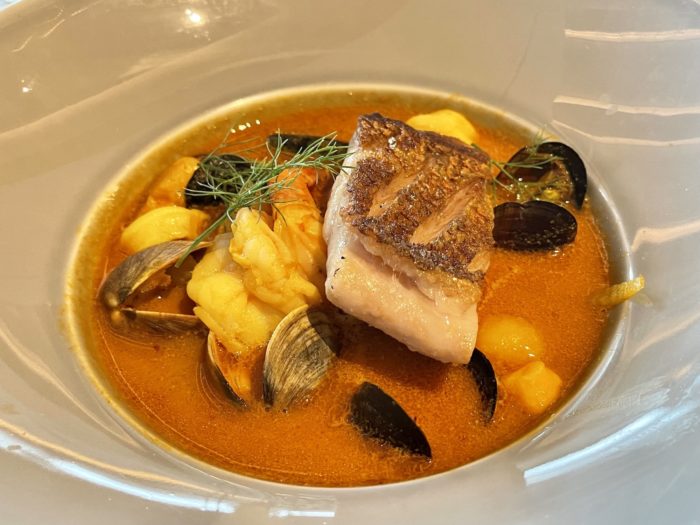 So this is a Provencal Fish Stew with Red Snapper, Branzino, Clams, Mussels, Fennel, and Saffron Rouille, and Chrissy was REALLY looking forward to this. It’s an interesting dish as the appearance is simple; but if you’ve made it yourself, you know how hard it is to make it right.

The seafood was all perfectly cooked, but there was such an overwhelming saffron flavor that Chrissy couldn’t do more than try one bite of each item. She could literally smell that saffron coming off of it and the taste was even more powerful. If that’s your thing, this will be a treat. Never again for her. 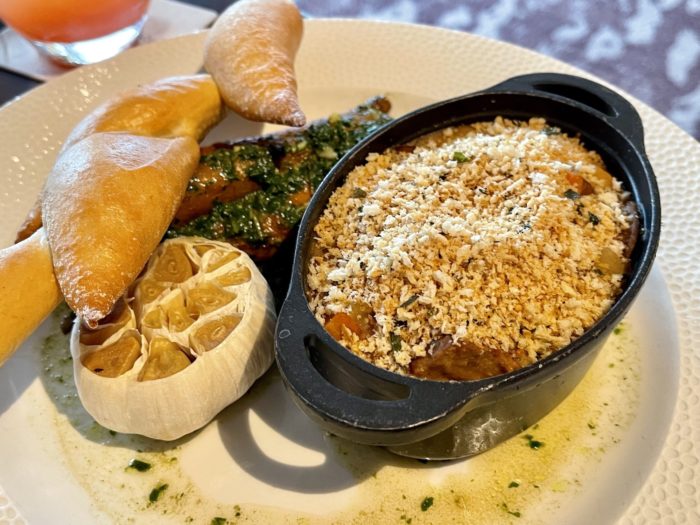 This plant-based dish is comprised of King Trumpet Mushrooms, Root Veggies, and Plant-Based Sausage; and unfortunately, it was so salty that one bite was enough as she couldn’t manage another. The server didn’t seem all that surprised.

The true star of this dish, and the second most wonderful thing from this dinner after the escargot, was the roasted bulb of garlic. While it’s not on the menu, Chrissy’s server said you can order a bulb as a side next time. The garlic just pops out of the bulb and is ready to spread!

Basically, bread, snails, scallops, and a bulb of sweet, roasted garlic and it’s the best meal ever. 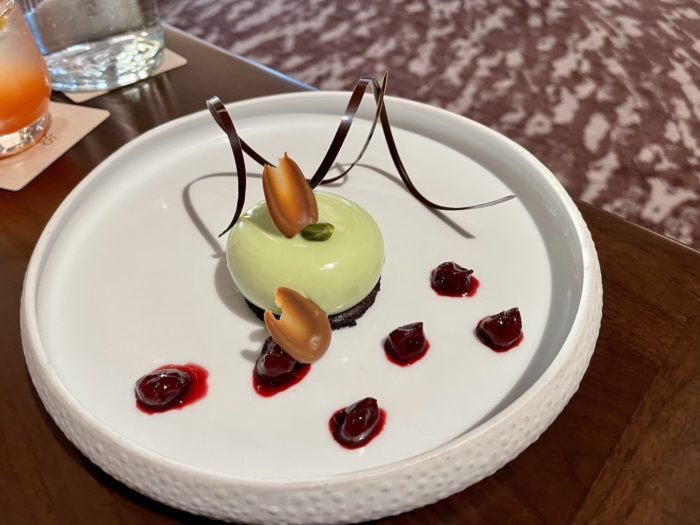 This sweet treat is chocolate cake with pistachio mousse and Morello cherry. Although it sounds rich, it was very mild and lightly sweet. According to Chrissy, the fact it’s not too sweet makes it the right dessert for the “cheese instead of cake” folks.

It’s also a feat of chocolate engineering sure to make everyone on your Instagram jealous. It’s a simply beautiful dish.

Described as having a caramel center, Chantilly cream, and raspberries, this cake was rich enough to share but Chrissy warns that she would 100% stab someone with the pointy end of the Topolino’s bread if they tried to have a bite.
The drama of the caramel center is worth the $14.00 alone. It was super sweet with the right amount of salt and tangy raspberries to cut some of the sugar. Decadence on a plate and worth every bite. 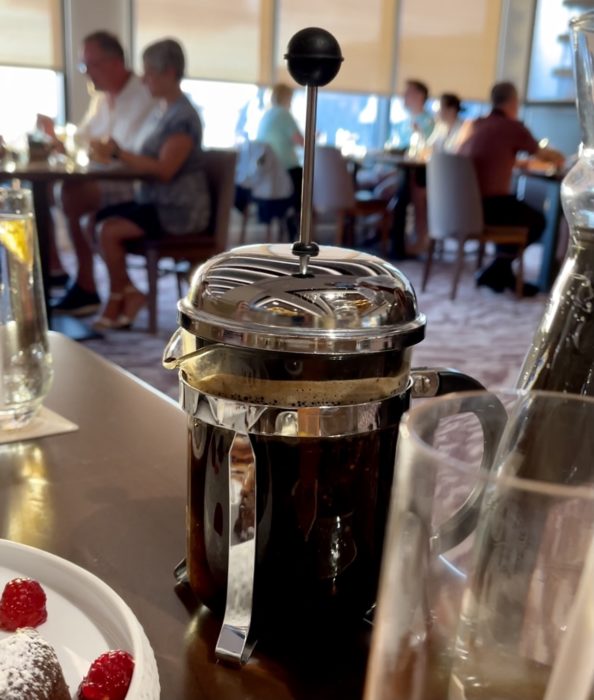 After a meal like that, caffeine is in order, which is why Chrissy ordered the press pot coffee. It’s priced at $6.00 for one and $9.00 for two, and it didn’t disappoint.

Part of the appeal of Topolino’s is its location and rooftop view. What Chrissy found is that a 6:20 – 6:30 p.m. reservation will have you on the Terrace in time for the best sunset views on property while also having the luxury of taking your time between courses.

And even though that outside bar isn’t open, you can sit as long as you want on the Terrace while the views change and delight and as music floats up from below.

Overall, Topolino’s is pricey but worth the splurge. Also, you can dine here without breaking the bank if you just stick with Chrissy’s butter, garlic, chocolate plan!
Have you ever dined at Topolino’s Terrace at Disney’s Riviera Resort? Is this on your to-do list? Let us know in the comments!

One thought on “Is Topolino’s Terrace – Flavors of Italy the Tops for Disney Dining?”