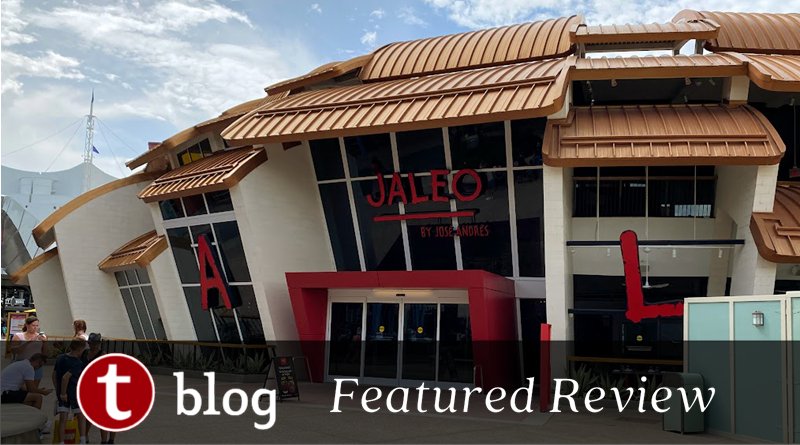 Jaleo is a restaurant in the West Side area of Disney Springs. The offerings are mostly tapas, which range in price from $5 to over $20. Due to the style of the meal, which focuses on shared small plates, your price tag will vary a lot. Most dishes can be easily shared between 4-6 people tapas style, or 2 to 3 selections together can make a meal for an individual. If you keep your choices limited it’s possible to dine for only $25-40 per person, not including drinks and gratuities. But if you are the type of person (guilty!) who views the small plates of tapas as an excuse to try So Much Good Food then you can run your bill up to $100 a head without breaking a sweat.

Reservations are often available on short notice – even on the same day; Jaleo is open for lunch and dinner. If you get a same-day dinner reservation it will likely be on the early side, around 5 p.m. or so. The dress code is casual: feel free to dine in whatever you wore to the parks. Be aware that the menu changes frequently and is often out of date on Disney’s site: for the most up-to-date information look on the website at www.jaleo.com.

Jaleo’s pan con tomate is one of the best – if you’ve never had it, think of a really good pizza, the kind made with a thick, lightly cooked sauce that still has chunks of tomato. Take a slice and hold it up by the edge so all the cheese and most of the sauce falls off, leaving behind just enough to coat the crust with the intense, fresh flavor of the tomatoes. The pan con tomate is kind of like that, except the bread here is much, much better than any pizza crust.

The Super Flauta was a perfect example of Jaleo’s winning recipe: take a few ingredients with contrasting and complementary flavors, put them together in exactly the right proportions, and put them on a plate. This was just a crusty baguette with tomato and iberico ham on it. But it was so, so good.

You can also get a selection of 5 cheeses for an additional $8, but we stuck with three so that we could choose the mildest that would be the most acceptable to everyone in our family. Don’t mistake mild for flavorless though: each of these cheeses had its own personality and was well matched to its accompaniments.

OK, these things are deadly. What you see above is the first block of two that we ordered, having no idea what they were. Our server was absolutely correct when he assured us that they weren’t really shareables, so we ordered two … still somehow sneakily thinking in the back of our minds that we could give all five of us a taste somehow.

Well, that didn’t work, but it was OK because we followed up this set of two with another order of five. Yes, they came in a block that was 5-long instead of just the double slot you see here. And then we got another round of five. We began to feel like we were ordering tequila shooters and knocking them back; as each block arrived at the table a little voice in the back of our heads was chanting “Chug, chug, chug”. So we quit after the third round. At least for a while, until we ordered a fourth round of three right before dessert.

The thinnest, crispiest, ever so slightly sweet-like-a-waffle cone, with a bit of quince jam, a dollop of goat cheese, and topped with pulverized walnuts. A contrast of textures: crispy cone, jelly, and semi-soft cheese. A contrast of flavors between the sweet jam and the tangy cheese, with a teensy deep/bitter note from the walnuts. We really liked them, could you tell?

Here again in both dishes we see the Jaleo magic formula of 4-5 ingredients in perfect balance, and the technique to make sure they stay that way. The recipe for the Catalan Spinach used to be on Jaleo’s website, and I’ve made this dish in my own kitchen. It looks simple, with only 4 ingredients (not including oil and salt). But it’s a masterpiece of timing: the entire dish takes only 3-4 minutes yet in that time the apples and raisins cook just enough to form a sauce that transforms the barely-wilted spinach. Let it go even 30 seconds too long, and it’s not the same dish at all. Ours was perfect, and they’ve added dried apricots to the recipe recently as well.

The Croquetas de pollo are served on a cushion, which is kind of a whimsical presentation. These look a bit like mozzarrella sticks, but the creamy chicken filling will remind you of every really good chicken casserole you’ve ever had. (Only the good ones, not the ones that should have stayed in their 1950’s cookbooks and been forgotten.)

The Patatas bravas were crispy-soft like a really good french fry, with tomato sauce and mayonnaise to dip and smear them in. These did not last very long at our table.

Like all the fried food we had, the Buñuelos were crunchy without being greasy. The coating was a nice contrast in texture to the filling, which is minced, spiced fish. I’ve eaten these before in other trips to Jaleo, and I can tell you that there is never any of the honey alioli on the plate when I’m done with it, because it’s just so delicious that I always find something to mop it up with.

Yup, it’s a grilled sausage & cheese panini, and a grilled ham & cheese panini. I have zero idea why they are called Bikini here and not panini, but they are some of the best cheese-and-meat panini you will ever eat. The exterior was toasty and crunchy, and just a tiny bit greasy as it should be. The cheese was melty and delicious. These were heavy and filling as you might expect them to be, and are a good choice if you’re looking to keep your total number of dishes low. If you are looking to try over four dishes per person, I would recommend not ordering both of these.

Dear reader, I have failed you. We were told what the name of this paella was, but I was too busy taking pictures and forgot to write it down. (Or maybe I was too busy knocking back Conos de Queso). But, since the paella offerings vary nightly and are pulled from a set of 7 or so, the odds are very good that the paella you can order is not the same as the one in this picture anyway.

Here’s what you can expect: one or two paellas will be available; you can order either a tasting size (usually around $15-$20) or a full plate (usually about 3 times the cost of the tasting size). The tasting portion is shown above. The rice will be moist and slightly saucy and flavored with the characteristic saffron and other spices. We had barely any of the crunchy soccarat, the rice that cooks against the bottom of the pan and becomes crisp and toasted, but we had plenty of meat (both meatballs and sausage) and small chunks of tomato from the sofrito. Despite the rich flavor, this isn’t a dish that’s more filling than it looks like – the tasting portion above is a good-size side to split between a few people, but I wouldn’t want it to be my whole dinner.

When I was in college there was a nearby tapas restaurant that listed on its dessert menu the “Ubiquitous flan”. Some dishes are classics and I always enjoy a restaurant that can poke fun at itself as Jaleo does here with its “very, very famous tapa of shrimp sauteed with garlic”. Humor or no, the shrimp are delicious – don’t be surprised to find yourself asking for extra bread to sop up the garlicky sauce.

Both of the meat dishes were excellent and flavorful. The steak was perfectly cooked and paired well with the peppers, with their flavor intensified by the confit. The chicken had the beautiful crisp skin you get when the fat has just melted away during the roasting, and the meat underneath was still perfectly tender and moist. But I’ll be honest, compared to some of the dishes we ate earlier in the night these two didn’t feel as interesting or unique.

All the desserts were wonderful. The standouts were the Tarta, the Selva Negra, and the Pan con chocolate. The Tarta only looked burnt, and the use of goat cheese gave it a mild flavor and a texture similar to a ricotta cheese cake. The Selva negra was a rich, smooth chocolate mousse that avoided being too heavy to eat after a big meal and contrasted well with the tart fruit on the plate. And the pan con chocolate, as well as the ice cream and grapefruit, was more of what we’d been eating all night: simple, clean flavors that brought an interesting balance to each bite.

One thing I haven’t mentioned is the service, which was top notch – since you order and receive food more frequently when eating tapas than at a more traditional three-course meal, the service can make or break your experience. Our server was consistently on hand when we were ready to try our next set of dishes, and food arrived promptly. Our meal didn’t feel rushed, nor did it drag on due to the multiple rounds of ordering.

I have a sister who lives in Washington D.C., home of the original Jaleo. Between visits to her and visits to Disney, I’ve eaten at Jaleo several times. The food is consistently excellent and interesting: a mix of standards and unique tapas. I didn’t find anything on this visit that brought down my extremely high expectations.

TouringPlans users seem to agree, as Jaleo is currently ranked #6 out of 97 based on our survey data, with 95% of diners giving it a thumbs up.

Have you dined at Jaleo? What did you think? Let us know in the comments!