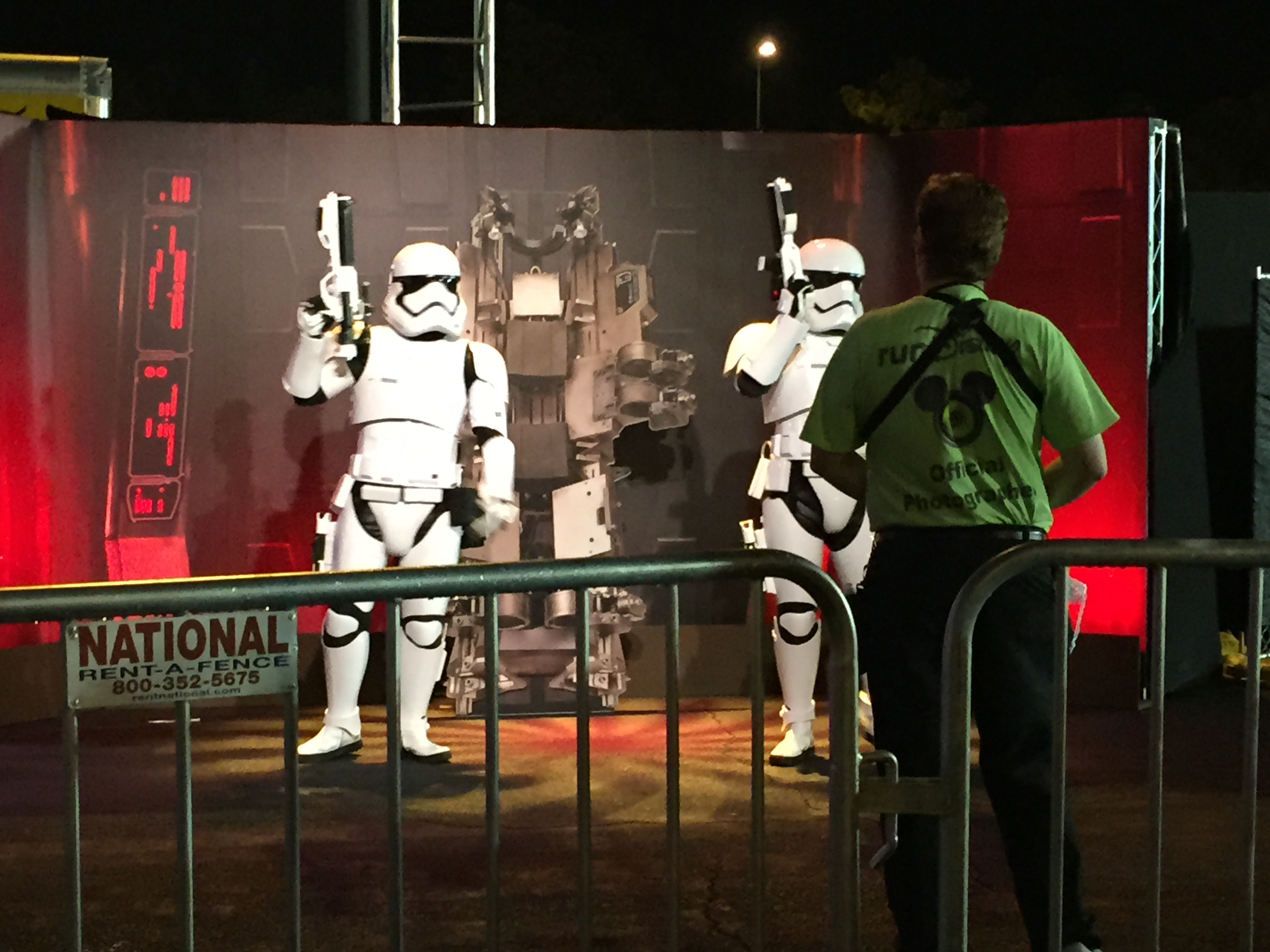 Weeks with runDisney events always seem to get away from my family. Between the Expo, three different events, and recovery from those early morning days, runDisney events take a huge chunk out of our life. Truth told, I don’t really like running that much, but Disney races make it more bearable–for various degrees of bearable. I’ve done a race when it is cold enough that I’ve had to carry a supply of hand warmers. I’ve done a race when it is warm enough that we’ve been handed cooling towels at the finish line. I’ve done a race when it’s been so windy that I wasn’t sure if I’d end up at the finish line or at Oz. I’ve even had the “fun” of “running” in the rain. (It was more like ice skating on the slippery Boardwalk.) With the ever-increasing cost of a runDisney weekend of races, and my general apathy about the running experience at this point, I had decided going into this weekend that this would be my last runDisney event for the foreseeable future. (Unless they bring back the Everest Challenge–I’m totally down for doing that again.) This weekend was the Star Wars Dark Side set of races. For this weekend, I had cut back from my 10K usual to a 5K so that my husband could experience an inaugural 10K. For the kiddo, it was the ever-exciting 200-meter dash.

First stop, the Expo. I knew from previous experience that the best time to go was late morning (after the rush of initial crowds had gone but before locals were stopping by after work). Although I could only pick up my packet and my daughter’s packet, that was two out of three, and that ain’t bad.

The Expo is almost always at Wide World of Sports, and it is one of the only reasons I ever go out there. It was a beautiful Florida day, which made the hundred mile walk uphill all the way quite pleasant. On the screen in the central plaza, they were showing clips from Star Wars movies interspersed with trivia questions. The first stop was the HP Field House to pick up the packets and shirts for my 5K and my daughter’s kid’s race. At this time of day, the place was practically deserted, and I was able to get both packets with no wait.

One thing I have to give runDisney massive credit for is that the flow for the Expo was fantastic. It was easy to go from one place to the next. After packets, I went up to the entry level to see the merchandise that was for sale. There were some cute items, but nothing really struck my fancy. It was evident from the fluorescent tape lines on the ground that they had been ready for crowds earlier in the day. Following another set of signs, I could go meet BB-8 or take a look at the main Expo building. Figuring that I’d see BB-8 later on, I headed for the Jostens Center, which was much more active.

Still a case of nothing for me to see here, but even though I wasn’t looking at any more races, I still had to stop and see the medals. I also took a look at the specialty drinks, but opted for something a bit more responsible in the end. Good thing, too. Stormtroopers were on patrol. Painless packet pickup, and now it was time to wait for my Friday morning wakeup call. Because we live so close, I was able to “sleep in” until 4 AM. Seeing Spaceship Earth in the dark of night is always a joy–or as much of a joy as it can be at 4 AM. In the crowd when I arrived, there was a roving reporter asking people to do their best impersonations of Star Wars characters. When I got there, he must have been doing it for a while, because he was asking for people to do their best Salacious Crumb. (At that time of morning, it took a few seconds for me to remember who that was.) Also in the pre-race area were several meet and greets where you could have your picture taken with Stormtroopers, Darth Maul, Jabba the Hutt (and  yes, with Salacious Crumb!), and more. I didn’t feel like waiting in the lines, so I just wandered around and eventually to my corral. In other races, there’s been a dance party atmosphere going on, and I think I actually missed the energy of that. In the corral, I talked with a lot of people who were first-timers at runDisney races. Many mentioned that the only reason they did this one was that they were huge Star Wars fans. What really is nice about a runDisney 5K is that you don’t have the pressure of fear of being swept, and it is a distance that almost anyone can do. The 5K races also have minimal amounts of time outside a theme park (usually only 1 mile out of 3), so it is not as dull as some of the longer races.

That said, on-course entertainment is minimal–usually just a few meet and greets–and those meet and greets will have long lines. But first, you have to get out and running. It’s always fun to try and time a photo for the fireworks at the start of each wave of runners with an iPhone, In all my years, I’ve only nailed it once. This year, the force wasn’t all that strong with my photo skills… The first mile is basically walking around the outer rim of the parking lot and back into the cast entrance for Epcot. Not much to see, except one odd “photo op?” But going in the cast entrance to Epcot has some cool factor no matter how many times I go through there. Just before we got to Test Track, they had two special sights on the course. First was an incredibly long line to get a photo with R2-D2. At about 20 minutes to wait on a race that is done in under an hour, that’s a hefty time commitment. Next was a video screen playing Episode IV. It was tempting to watch for a few, but the clock was a’ticking. Although the line was reasonable, I still wanted to keep moving. Had to take the obligatory Spaceship Earth photo, along with the comment of “That’s no moon…” Speaking of photos, I was really pleased with the Photopass photographers on course. Not only were they easy to see, but the photos that I got were well done and they are included with my annual pass–a huge savings over the photos we had to buy from MarathonFoto in the past. Once heading through International Gateway, I saw the power of the force…or something. Chewbacca was doing a meet and greet, and if I thought the line was long for R2-D2, it was insane for the wookie. I wonder if some people are still in line…. it extended from the lit up area on the right, all the way around and back to that same location on the other side of the green space. Backstage again, and then out at the UK. It seemed that many people were just seeing the Flower and Garden displays for the first time, so there were lots of oohs and aahs as we headed back towards Future World. One more photo op, this time with Stormtroopers at the Fountain of Nations, and it was an easy stroll to the end. One more movie viewing for fans of The Empire Strikes Back. Rumor has it that if you were behind the pace, they’d make you see Episode I on every screen. Had to give a quick wave to race announcing legends John and Rudy, too. And there it was, the finish line. Got my medallion (runDisney speak for rubber medal), and all the finishing line goodies. Had to dash home to get my daughter to school, but all in all a fun morning. Over the course of the weekend, I heard a lot of comments about issues with the longer races, specifically bussing and character meet and greet issues. Hopefully these issues will be addressed in future years, because it was an incredibly fun race. My husband enjoyed his first 10K and my daughter loved her 200 meter. We also did get to see BB-8 before he headed off to a galaxy far, far away. At this point, my daughter and husband are registered for their next runDisney races, and I’m quite happy taking some time to be a spectator. Still, if I had to choose whether or not I’d do this again, it is one I would think about, because it was a lot of fun. Tune in for my next installment in two weeks when I’m “Dream”ing up something exciting for my next Best Week Ever.