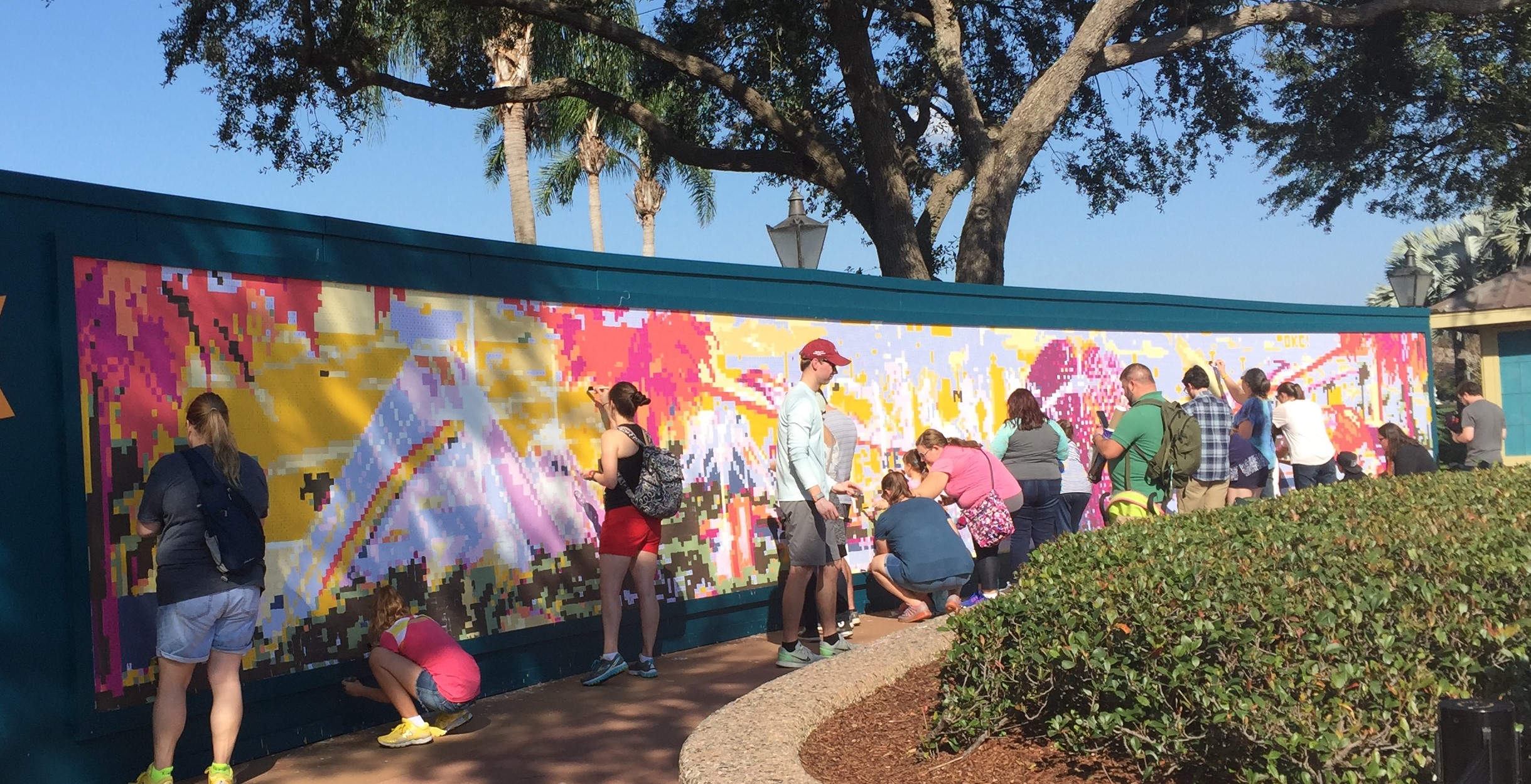 Over dinner on Friday night, it occurred to us… we haven’t been inside a Walt Disney World theme park all year. Between long work hours, visiting family, Girl Scout cookie sales, and other scheduling fun, our park time has been non-existent. Last weekend, while my husband was on call, I was watching with delight all the coverage of the Epcot Festival of the Arts. We cleared out our schedules and made our way over to Epcot to see what there was to see.

When the Festival of the Arts was first announced, I heard a lot of people talking about how it was some sort of money grab and would be a thrown-together event. The first weekend coverage was very positive, and so I went in with high hopes. Walking around, there was so much to see going on that it quickly became clear that this was anything but thrown together. The very first thing that caught my eye was the Figment topiary near Spaceship Earth. Inspired by all the wonderful wallpapers and lock screens shared by readers, I snapped a picture to make my new lock screen for my phone. On the other side of the Fountain of Nations was a set of three different Future World-themed “living statues”. When we were there, the spaceman was drawing the biggest laughs. Nice work, pal. From reading other people’s tweets about the event, I knew where I wanted to start: the Festival Center in the Odyssey. We weren’t looking to do any classes that day, but when we arrived, a lesson in watercolor painting was already going on. Catching snippets of a few of these classes, it really does seem like they are worth attending, if there’s one that strikes your fancy. Instead of the class, I wanted to take a look at the two exhibits. First, our daughter’s favorite artist, Mary Blair. And then The Future Worlds of Herb Ryman. If you’re not familiar with the name, you’re probably familiar with his subject matter. For this exhibit, it was several works that he did as concept art for what would become EPCOT Center, and going all the way back to EPCOT as the city of tomorrow. Looking at the artwork, our daughter was totally enthralled and hinted that in addition to becoming an architect who builds models when she grows up, she wants to also do the concept art, too. Inside the Odyssey, there was also some food available for purchase. Although not as many booths are out as something like Food and Wine, there are plenty to choose from. I decided to grab the savory croissant doughnut sandwiches and the “Pop’t Art”. Even though my full-on sugar fast has ended, I’m still not eating anything with sugar in it on a daily basis, so splitting the Pop’t Art (a sugar cookie with chocolate hazelnut filling and icing on top) three ways was more than enough for me. It was good, but very sweet. I was less thrilled with the doughnut sandwiches. The three (from left to right) were a chicken mousse, an herbed cream cheese, and a “spicy” tuna. The tuna was good, although not spicy, and the cream cheese was nice, but the chicken was very bland. Also, because the fillings were so goopy, it was hard to eat them without making a huge mess. For me, the croissant doughnut to house the sandwich fillings was probably done for novelty, as it didn’t really add anything to the experience. One…and done.

Our next stop was to purchase a scavenger hunt map and go off to Figment’s Brush with the Masters. If you know anything about art, you could probably fill in the paintings by their respective countries. Finding the actual paintings in the countries was a little more tricky. Unlike the Easter egg hunt or Remy’s Hide & Squeak, the artwork wasn’t out in plain view. You had to wander in buildings to find the art–famous works, with a little touch of Imagination. What was neat about this was that we ended up in shops that we usually skip. And even though I didn’t buy it, I did fall in love with this shirt in Germany. Throughout the park, there were all sorts of artists doing their art in front of everyone with different media. It was fascinating to stop and watch this person painting and that person drawing with chalk and so on. One eye-catching piece of art actually required technology to “get it”. If you saw this piece in person, it looked flat and somewhat distorted on the ground. View it on your smartphone or tablet, and it becomes almost 3-D. This image of the Statue of Liberty is done on a sheet of paper. You can easily spend an entire day at Epcot just for the Festival of the Arts, and I am hopeful we’ll get back there at least once more before it ends. On our way out, we participated in a giant paint-by-number. Each of us was given a small container of paint, a brush, and told what number to find on the mural. Then, we each got to paint a small section. Throughout the day, you could stop by and watch the mural being filled in. It was getting late, and my husband wanted to get a new phone case, so we swung by Disney Springs to grab a bite to eat and do a little shopping. Lime Garage was full, but it was a beautiful night, so we opted to park in the Orange Garage and take the boat over to the Marketplace. I hadn’t told the family about the new color/design for Characters in Flight. They both said that they liked it compared with the well-loved original version. We also got to see how Paddlefish was coming along. It really looks great from the outside, and is delightfully appropriate to have the boat next to The Boathouse. Because it was Saturday night, many of the restaurants were crowded, but we were able to get in at Wolfgang Puck Express, and even snag a seat at the Chef’s Table. Even though there is a sign saying it is okay to sit there, so many people walk right on by. Still, it gives a great view right into the kitchen if you enjoy watching food being prepared. My husband and I split a pizza and salad–made even more reasonable with our DVC discount. (Always keep pulling out cards until something gives you a discount!) I guarantee this is the least expensive Chef’s Table in all of Walt Disney World! On the way out, after a day of looking at art, I took a glance at one of the shop windows to see how artistically it was done. And…well…I guess it’s art because someone is bound to like it, but this one really gave me the creeps! As our daughter was starting to get tired, we headed back home. Even after living here for several years, it is wonderful when Disney offers something new and exciting that we can share with everyone as we keep living our Best Week Ever.