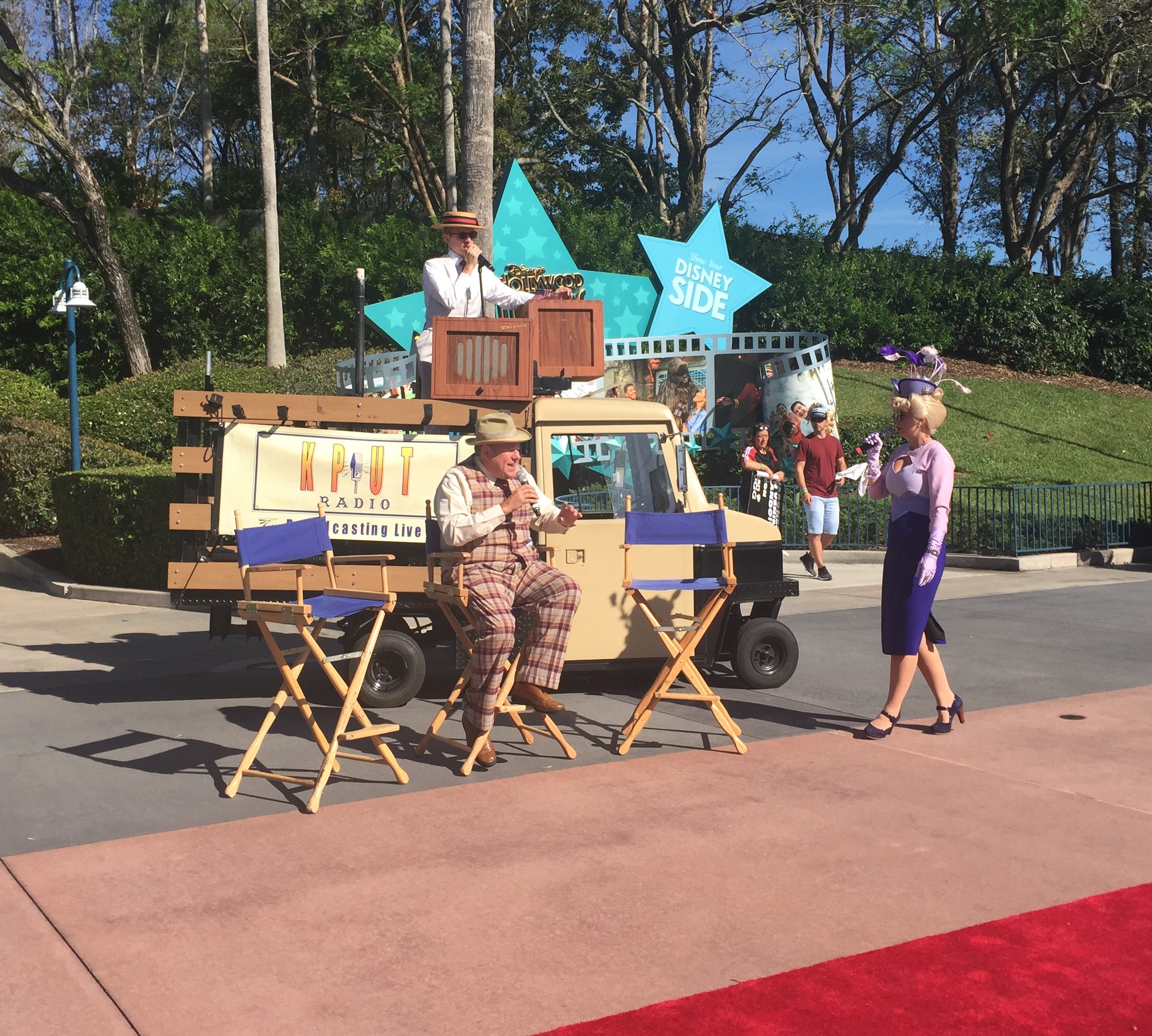 Does it seem a bit like Disney’s Hollywood Studios is that free add-on that you get when you order an As Seen On TV item? Visit Walt Disney World now, and we’ll throw in Disney’s Hollywood Studios! When you get down to it, though, the Studios still has a lot to offer, at least for a half day park. At least that’s what we told ourselves when we got up early Saturday morning to squeeze in as much fun as we could in a half day there.

When we arrived, the Citizens of Hollywood had been kind enough to roll out the red carpet for us. Of course we had to stop for the obligatory “take a picture of the hat that isn’t there”. Every time I visit the Studios, I hear someone commenting about the lack of the Hat. What do you think? Hat or no hat? Because none of us are thrill ride fans, and our daughter isn’t a huge fan of stage shows, that really does limit what we can do at the Studios. One thing we all did agree on was that we wanted to do Toy Story Midway Mania. The day before, I tried to get us FastPass+ times for the morning, but no luck for a party of three. Instead, I was able to get overlapping times for a party of two and a party of one. Works for me! Standby would have been an hour, but when our FP+ times were all active, we were able to walk right in. There’s a lot of neat stuff in the queue that you miss if you’re doing the FP+ line, but we did stop to try and guess this fun puzzle. Once we went up the stairs to get over the track and to the loading area, I saw that they had installed “new” (as in they could have been there for months but were new to us) monitors to give instruction about how to divide up a party to ride. A really cute addition, and hopefully it helps when people get up to the front to reduce load times. This time, it was a daddy daughter day and I got to ride solo in my row. Time enough for one quick picture and then off we went. Even though I’m terrible at video games, I had done some research about what to hit and where to trigger a few special things. I would like to say I got a reasonable score. And even better, I got bragging rights–for the first time ever, I was the high scorer in the car! Aside from lunch reservations, we had no other plans, so we decided to wander. Our first stop was One Man’s Dream. I am so thankful that this is still open, because I enjoy looking at the exhibits time and time again. Every time I’m in One Man’s Dream, I see something new. This time one of the whirligig models caught my attention. I would love to see more kinetic sculpture throughout all the parks. It adds so much, I think.

The final room before the movie has changed a bit. Gone are the oversized models, and in its place are some movie props and maquettes from various animated features. Of course prominently displayed was the ballgown from the upcoming live-action Beauty and the Beast. Instead of the short feature about the life of Walt Disney, a nine-minute preview of Beauty and the Beast was shown. No pictures or video allowed, of course. My husband and I were very impressed with that sneak peak. Our daughter was glad that it was “finally over”. (Did I mention she’s not a fan of movies or stage shows?) So it was a big surprise when we let her pick the next thing to do that she wanted to do Disney Junior Live on Stage. Sure, why not? The show is really cute if you have kids. Or if you like lots of special effects things falling from the ceiling. I’m just going to leave it at that. We still had a little bit of time before our lunch reservation, and since we were on this end of the park, we decided to tour the Star Wars Launch Bay for the first time. Yes, we have never gone in since it opened. Our options to get in were meeting characters or seeing a movie. We opted to go the movie route, and it made me realize just how much I miss the movie with Robin Williams and Walter Cronkite. It wasn’t a bad movie, but I have such a soft spot for that old animation movie. Once we entered the Launch Bay, we spent a few moments looking at the models of various ships. I enjoy Star Wars, but I can’t say I’m the most obsessive fan in the universe. It was neat to walk through, but probably wouldn’t have a need to stop by again. It helped set up our theme for lunch, though. The Sci-Fi Dine-In Theater Restaurant. Our daughter had never eaten there, and the last time we ate there was during the Bush administration. Our wonderful server, Benjamin, probably wouldn’t have been old enough to wait tables there the last time we ate there. Yeah, it’s that long ago. Although the menu has changed in that decade or so, the restaurant is still just as campy as ever. One down side to it is that with each row of the “car” only holding two adults comfortably, we were split between the front and second row of the car, with some other party of two sitting in the back. Of course this meant that I got to have a quiet meal to myself. I went with the current specialty burger, which had fried boursin cheese on top. Total splurge food, but oh so worth it. Unfortunately, with such low light, it was impossible to see what I was eating (or take a picture of it). The food is better than I remember it in the past, and although our daughter was less than impressed with the movie clips on the big screen, I enjoyed seeing those “classic” film clips in their glorious original state. Our server was more than willing to bring us a dessert menu, but when I’m at the Studios, there is only one dessert for me. When I heard that Writer’s Stop was going to be closing, I was horribly concerned my dessert would disappear. But have no fear, it still lives on over at Sweet Spells. If you look closely at the far right of the case, second shelf from the bottom, there is the beauty that is the Carrot Cake Cookie. Seriously, this may be my favorite snack food in all of Walt Disney World.

And because nothing was going to top that for me, we decided to beat the heat and head for home. Although crowds were brisk on the way in, there was only a small trickle of people coming in around 1 PM.