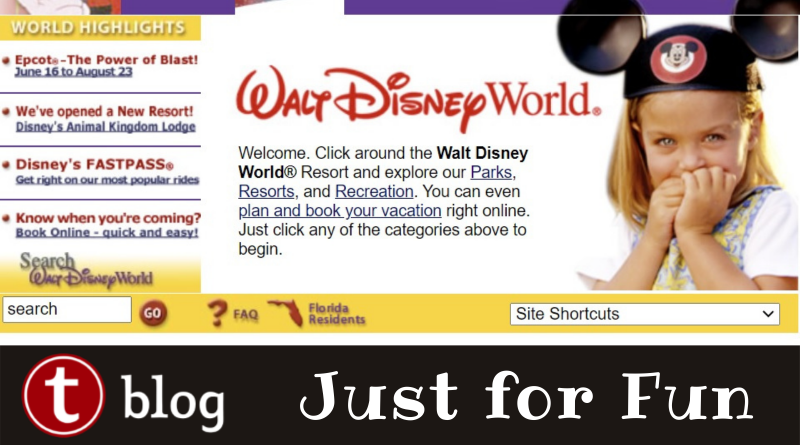 Imagine if you could go back to early 2001, fire up your Gateway computer, and log on to your AOL account. What would the Walt Disney World website have looked like back then? Thanks to the Internet Archive’s Wayback Machine we can do a little time traveling and find out. 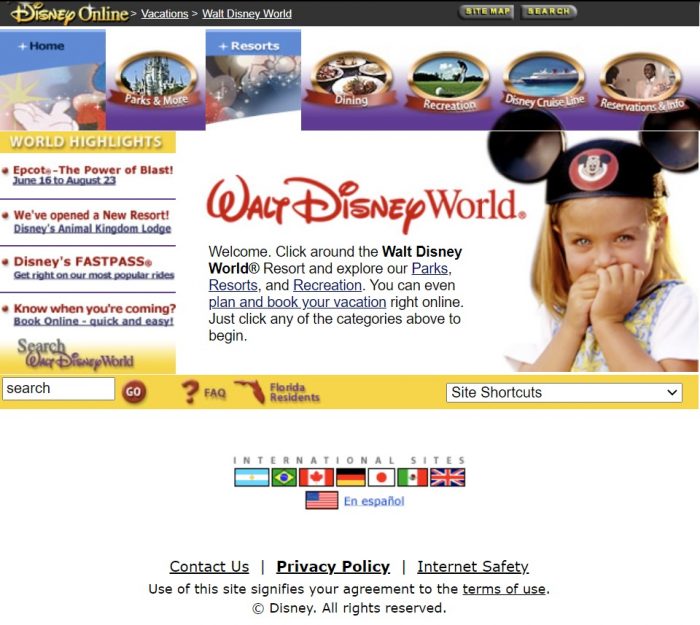 What did the home page of one of the world’s most popular travel destinations look like in early 2001? This is it. Not much to it, right? Websites in the early 2000s were extremely light compared to sites of today. Back then computers were much weaker, and more importantly most people had slow connection speeds. Broadband internet was slowly being added to more homes in 2001, but dial-up modems with speeds of 56 kbit/s or lower were the norm at this time. With that in mind it’s easy to understand why most pages on disneyworld.com only had 1 picture. 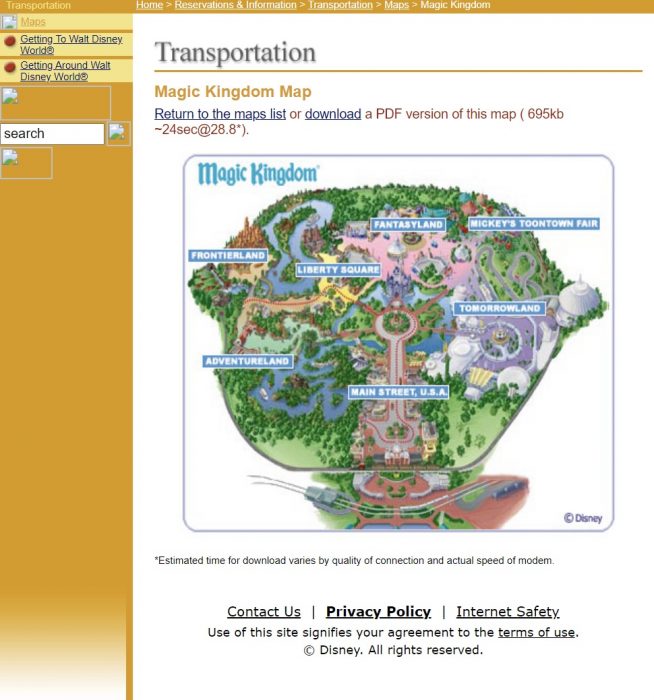 It’s always fun to look back at old Disney maps. Here you can see the park almost 20 years ago where the most obvious differences are the extinct Mickey’s Toontown Fair and the remnants of the old 20,000 Leagues Under the Sea lagoon. 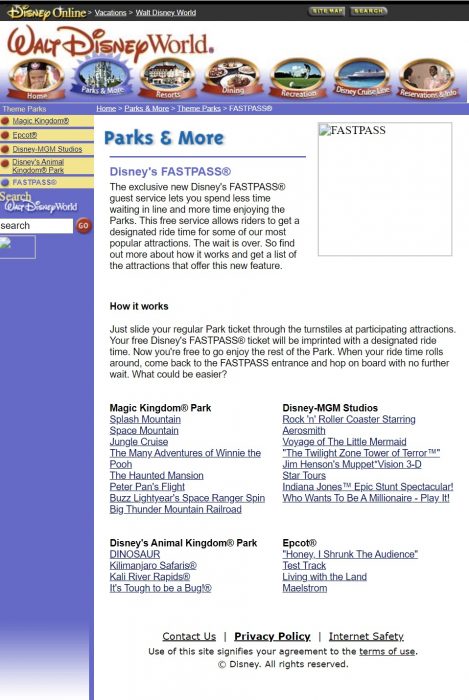 FastPass was only a couple of years old at this point, so it was still very much a new and exciting thing that had many people curious. As you can see, the roster of attractions that featured FastPass was slim back then, especially when compared to modern times. 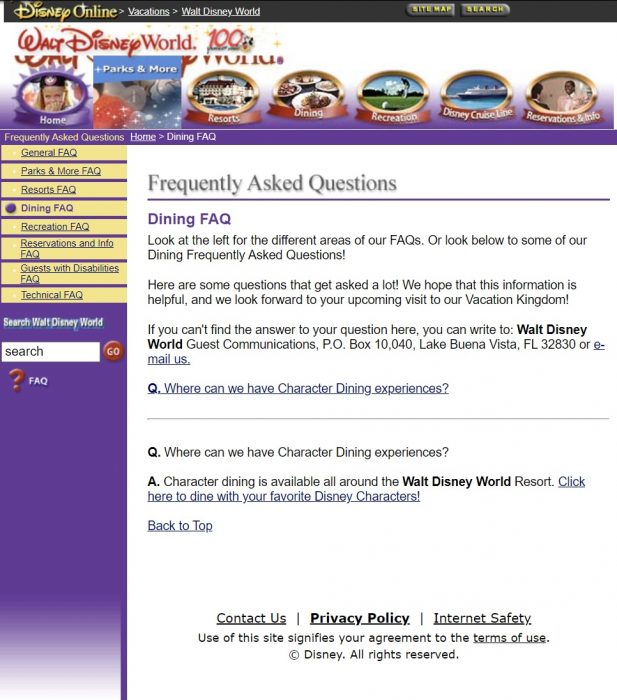 In the FAQ section you can find answers for every possible question you could ever possibly have about dining in Walt Disney World. Just kidding. As you can see, the dining FAQ has ONE SINGLE question and answer. 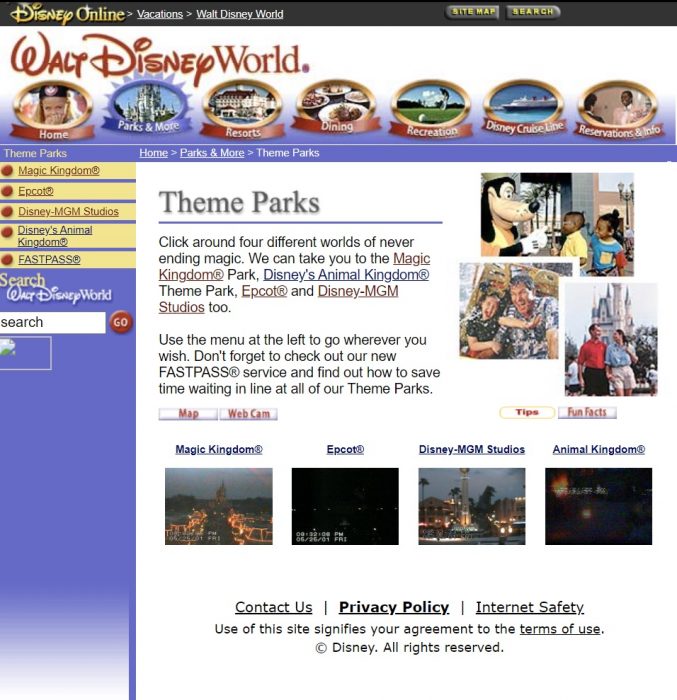 One of the coolest features I found on this old website was live webcams. As you can see the camera in the Magic Kingdom had an especially cool vantage point where it offered a stunning elevated view of Cinderella Castle. If the current Disney theme park websites had webcams I think they would be enormously popular, especially during this year when most people stayed at home during the pandemic. 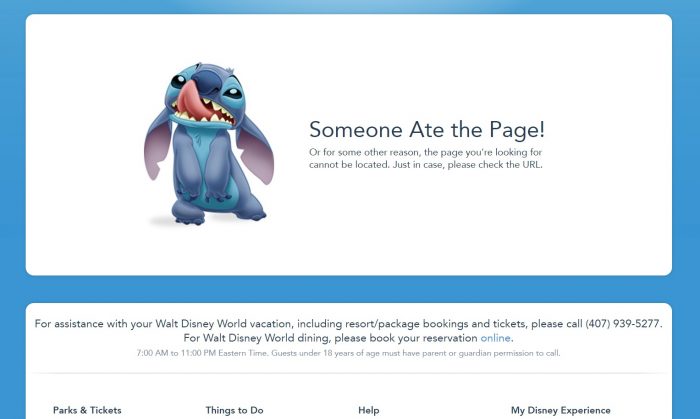 Before we move on, anyone who has ever tried to do even the most simple task on the Walt Disney World website should be familiar with the “Someone Ate the Page!” screen. This screen is shown when any one of the dozens of technical issues with the WDW site pops up. Curious about what this page looked like in 2001? Here it is: 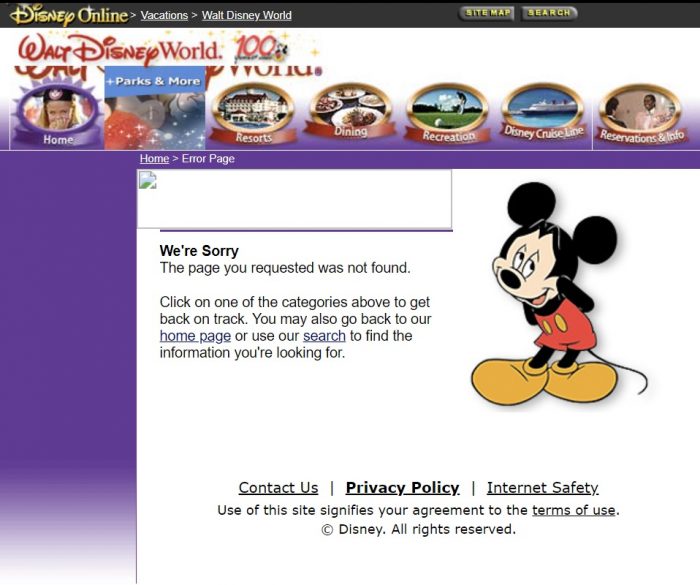 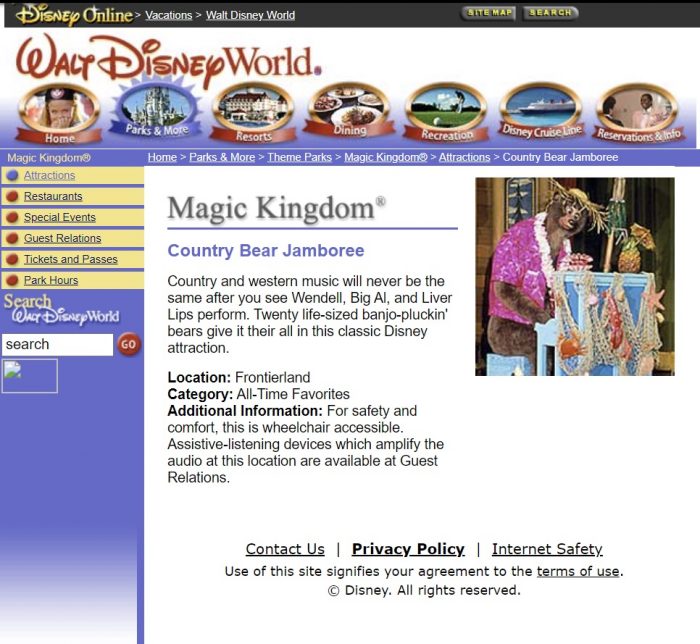 I found an error! On the Country Bear Jamboree attraction page there is a picture of Gomer in his Vacation Hoedown attire. This version of the Country Bear show was unfortunately long gone by this point. 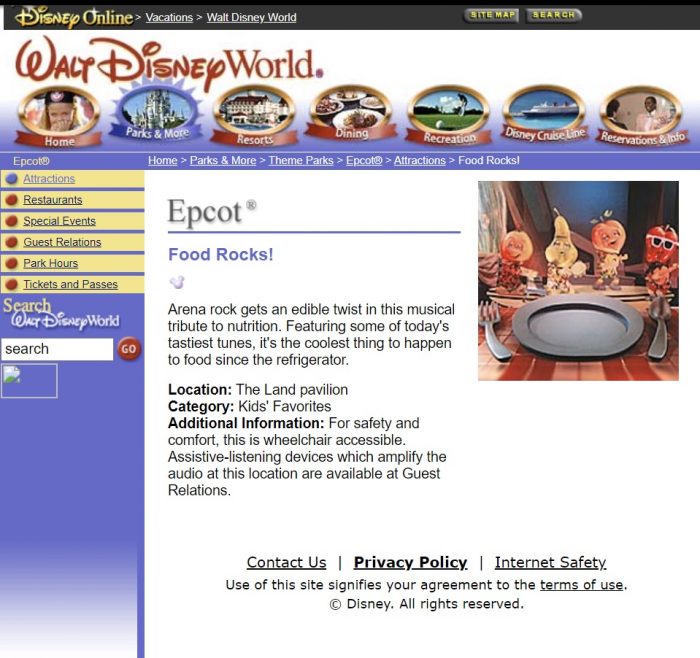 While we’re on the subject of attraction pages, rides and shows that are now extinct are still immortalized on this old version of the site. 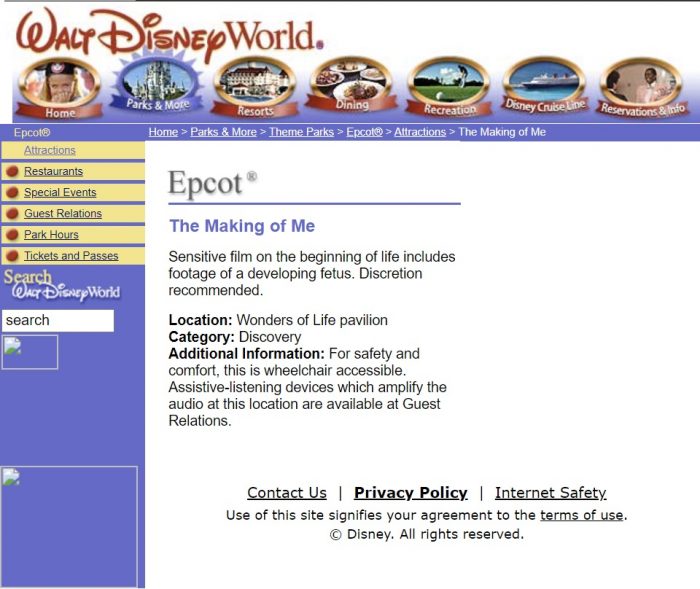 Another extinct show, The Making of Me at Epcot. I’m fairly certain this is the only time the word “fetus” has appeared on any Walt Disney World website. 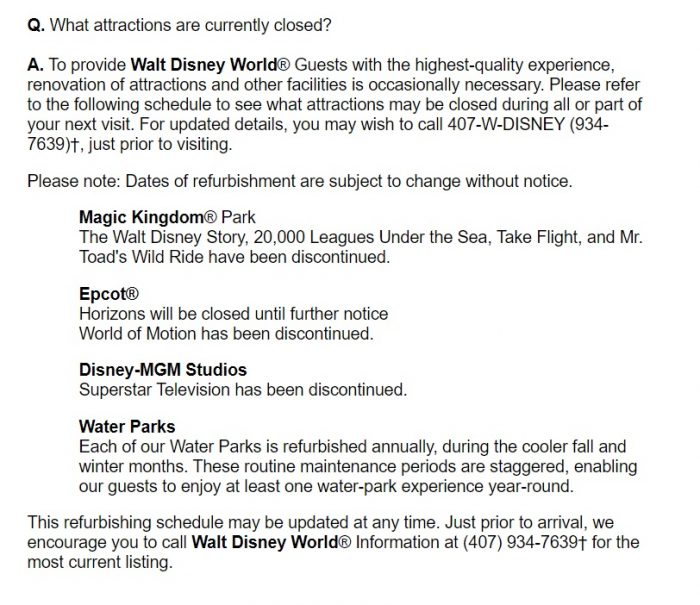 Circling back to the FAQ, you can see this section which shows attractions that had recently closed in 2001. It’s sad to see some all-time classics on the list! 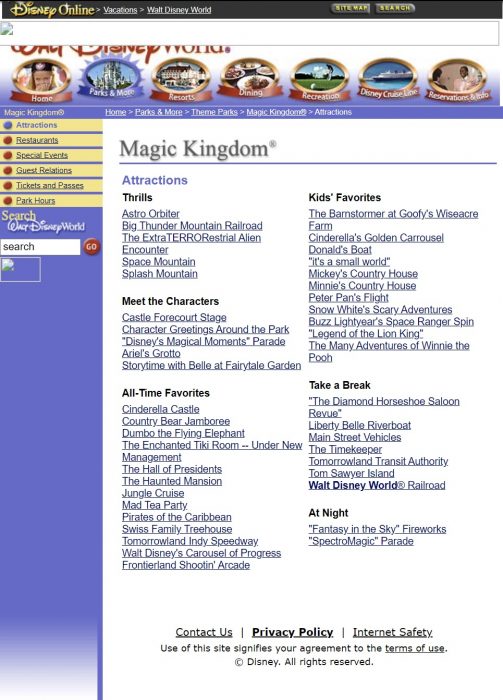 Again I have to mention how striking it is to see how simple the WDW website was back then. That’s not necessarily a bad thing. A good aspect of this is the site is very simple to navigate. There’s very little bloat, as seen on this page which features the list of attractions at Magic Kingdom. 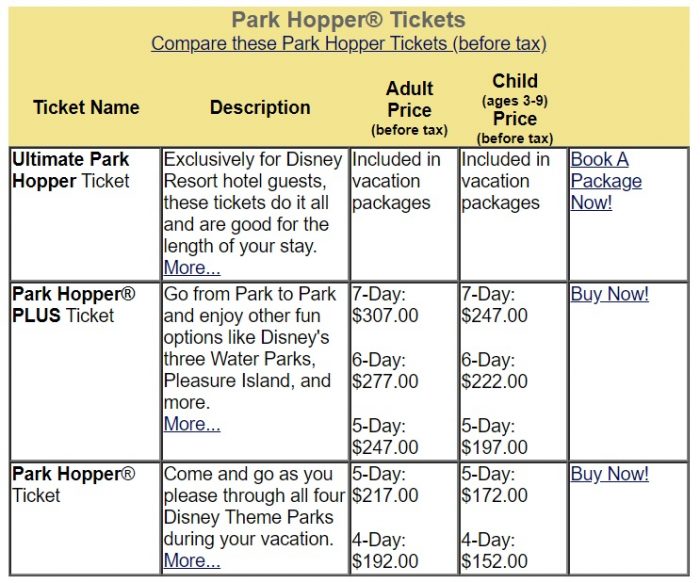 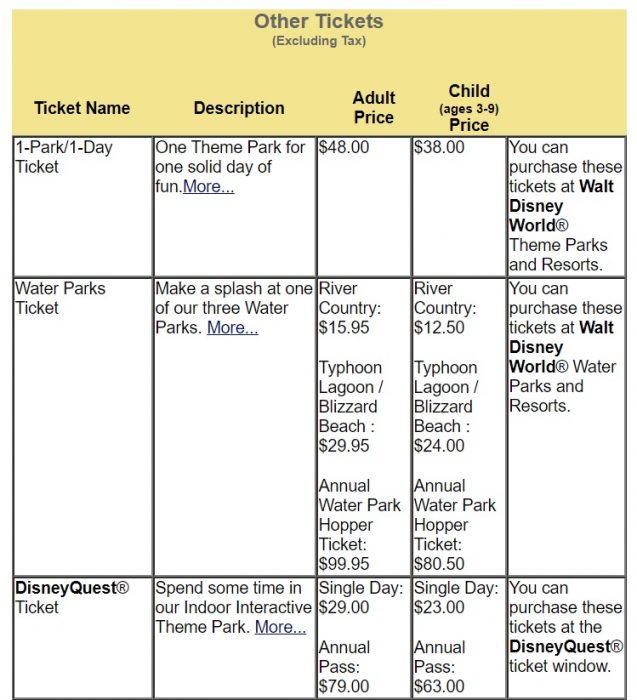 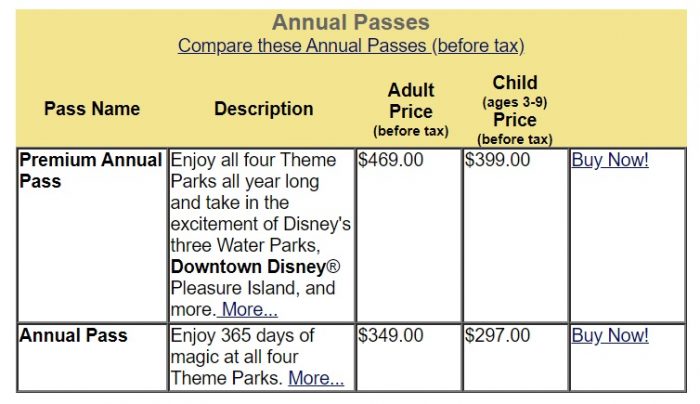 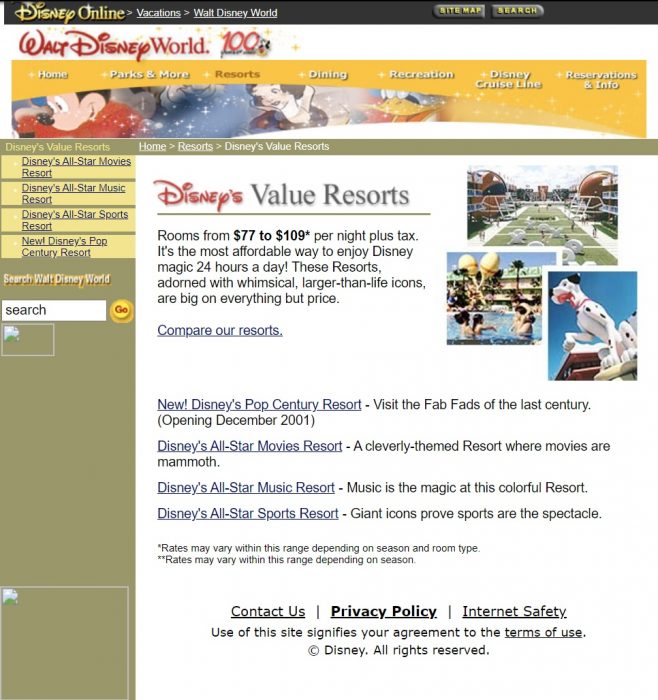 In 2001 you could stay on Disney property starting at $77 a night ($112.72 adjusted for inflation). After inflation the price of a value resort isn’t too different than it is now. For example I glanced at standard rooms at All-Star Music and found rates ranging from $112 to $226 throughout the year.

We’ll revisit other ancient Disney websites at some point but for now that’s going to do it.

What internet memories do you have from the early 2000s? Share them in the comments below.