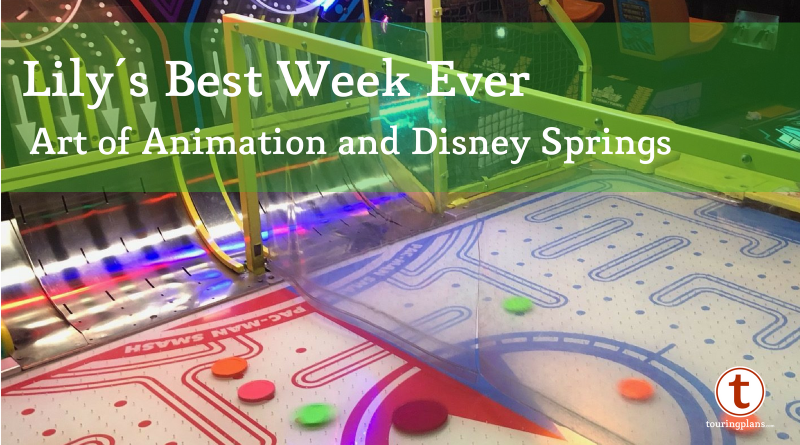 It’s me Lily, and I’m back again for another Best Week Ever. I get to do neat things living near Disney. Sometimes we just go to a resort for a meal or we go to Disney Springs to look around. Here’s some of what we did at Art of Animation and Disney Springs. This is the entrance of Art of Animation. There’s a giant picture of Lightning McQueen from Cars on the building. When you go in, there’s a big wall of animations from Disney movies. We got some lunch at Landscape of Flavors (that’s the food court). The one in the middle is what I got–I got chicken parmesan with a breadstick. After lunch, we went to take a look at the construction on the Skyliner. This is a picture of where the Skyliner poles are going to be. This is going to be the Skyliner station. It is located on the bridge to get from Art of Animation to Pop Century. They had pictures of what the Skyliner will look like. This picture is how the Skyliner will look like when it is moving. Those are the poles that they’re building right now. This is a map of where the Skyliner will go (kind of like a subway map). We went back inside because it was hot and I wanted to go to the arcade. This is the milk jug toss game. I was able to throw the ball into the milk jug for 1,000 points! This is the ball throwing game. This is a game where you throw balls at the screen and try and break things for points. You should not do that at home, especially on your TV! This is my favorite game in the arcade. It’s a giant air hockey table. You start off with one puck…. …and get lots more all at once! Sometimes we go over to the Lego store at Disney Springs when they have special things going on. A few weeks ago, the Millennium Falcon was getting built, and we built a brick to help put it together. This is me building it! When it was finished, it was going to look like this. (It’s not on display at Disney Springs, though. It was only there for maybe a week.) Another thing at the Lego store is the race car track. First, you build your car (without the wheels) out of Lego bricks. Next, you get the wheels. After that, you can test it on the track without the gate. And last, you can enter the race. They’re still doing construction on World of Disney, but they now have a different spitting Stitch sign. He wasn’t spitting that day, though. What do you think of the new sign? Around the corner, there’s a Mickey fountain. It is a scene from Fantasia where the brooms Mickey sent to fill the well made it overflow, and so he had to pour the water out. This shows him pouring water into pots. Across from the Mickey fountain is a store called Basin. They sell bath bombs, soap, and other things that smell good. I love the bath bombs! I have by MagicBands stored in an old bath bombs tube, and they smell great. This is a new soap. The description is very funny. (Not just for toast, but for your body too!) You can smell the soaps that are on the soap trays. There are a LOT of soaps, but you can smell them all. In Disney Springs you can find the water wheel. You spin the wheel and it eventually starts pouring out water from the top of the pole. (It is a lot of work, and sometimes it doesn’t work at all.) In one of the new stores, they have a Skybucket above a teacup (where you can take your picture). Which do you think would be better, the Skybuckets or the Skyliner? The last place we stopped was Starbucks. (Remember, I love Starbucks!) In this Starbucks, there’s a magic chalkboard. This is a picture of me drawing on the chalkboard. You use your fingers to draw on the screen, then after a little while, the drawing starts disappearing. It’s fun!

These are the kind of things you do when you live near Disney. Sometimes you go to the theme parks, but sometimes you just go to a hotel and Disney Springs. As long as you are having fun, that’s what matters.

What sort of things do you like to do if you’re not going to the parks? Let me know what you think in the comments. I’ll be back soon with more. See you real soon!

One thought on “Lily’s Best (Summer) Week Ever: Disney Springs and Art of Animation”