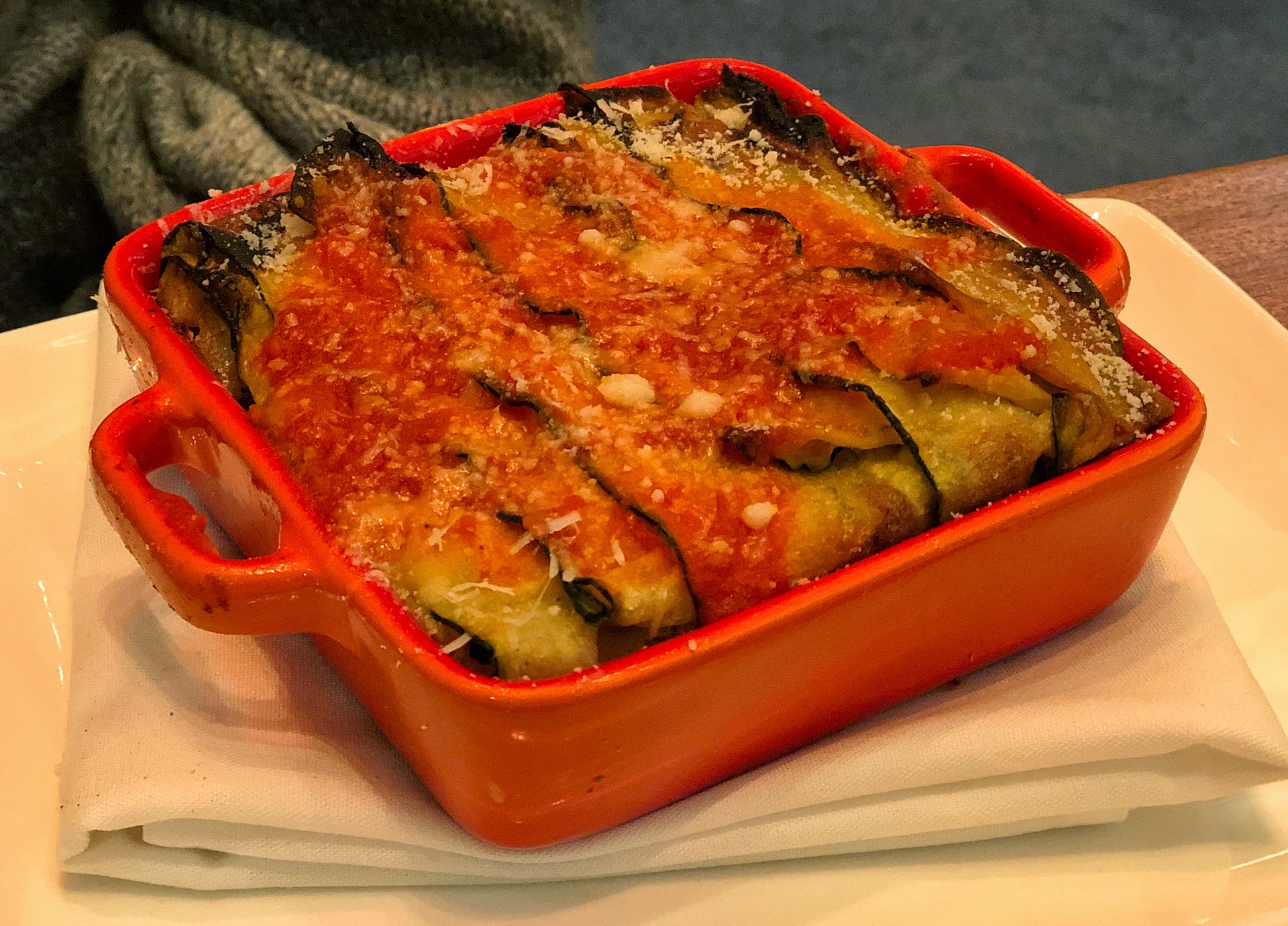 Within the last few weeks, several new Italian eateries have opened their doors at Disney Springs; among them, Maria & Enzo’s Ristorante, a table service location situated in The Landing, just adjacent to The Edison and Aerophile (formerly Characters in Flight). The restaurant’s story claims that it’s run by Maria and Enzo, and occupies an abandoned airport terminal from the 1930s, lending theme to the various retro travel posters adorning the walls of the massive main dining room. Every guest gets a dramatic entrance here, with a large sweeping staircase leading down from the lobby and check-in area of the restaurant to the central dining area (and adjacent “private” dining room, with a few tables tucked away in a quiet corner). Visually, the restaurant is colorful and striking – almost too much so, reminiscent at times of the old Wolfgang Puck dining room. The atmosphere is loud, with the open ceilings echoing the comings and goings of the many diners all around. Daylight floods the back of the dining room, full of windows, which offers guests a great view of the Aerophile balloon rising and falling periodically. Overall, it’s a welcoming space for families, but not terribly intimate.

The menu is enormous (both literally and figuratively), populated largely with an extensive wine and cocktail list highlighting Italian specialties like various red wine varietals, sangrias, and an entire section of negronis (a step up from most Disney cocktail offerings). For food, expect to find moderate to upscale Italian staples, not dissimilar from the pasta and entrée menus at Via Napoli or Tutto Italia, priced similarly to Tutto Italia (read: on the higher end of the “acceptable” price range for Italian food). To start off our meal, our server brought over the obligatory bread and olive oil service, which was fine, but nothing you wouldn’t find at your local Italian chain eatery. We settled on two appetizers, both recommended by our server, the Arancini di Carne (meat ragu stuffed risotto balls, $14) and the Caciocavallo Fritto (fried Sicilian cheese with spicy Pomodoro sauce, $13). Both arrived in short order, and we were off to the races.

I’m a big fan of the arancini available at Via Napoli, so I had high hopes for these, but ultimately, they disappointed a tad bit. For $14, you receive two golf-ball sized arancini (a small portion, in my opinion, for the price), and while the fry on the exterior was perfectly crisp, the interior was a bit too gummy for my taste, and completely lacking in the promised meat ragu filling. There couldn’t have been more than one piece of ground meat in each arancini, unfortunately. Flavor-wise, they felt a little one note, but the spicy Pomodoro sauce really made for a great accompaniment, lending an acidic and spicy punch to the party without overwhelming the rich and cheesy risotto.

The Caciocavallo Fritto sounds a lot like fried mozzarella on paper, but fair warning, this Sicilian cheese has a completely different flavor and texture than what you would expect. Six small balls, each also perfectly fried, come in one order (again, a bit small for $13, based on my expectations). The cheese inside is tangy and sharp, akin almost to an aged provolone in flavor, but the texture is less stretchy than you’d expect, and more custard-like. The flavor was a surprise, intriguing and new for me, and I enjoyed the few bites I had, but I really did wish for a few more balls to complete the plate. Several fresh salads also feature on the menu, so I wanted to give one a try to see whether their $12-14 price tags were justified. Ultimately, I decided on the Pugliese, composed of a handful of frisee, tiny bits of crisp pancetta, caciotta cheese, a soft poached egg, and dressed in mustard-white balsamic dressing. This salad is relatively decently sized, slightly larger than a typical side salad, but a bit smaller than what I’d expect from an appetizer (a trend, it seems). Well-dressed and seasoned, the caciotta cheese was really the star of the plate (aside from the oozing poached egg, of course), flavored similarly to the caciocavallo and punchy enough to stand on its own against the zippy dressing. Overall, I’d order this salad again, with only a bit of hesitation because of the price. The center of the entrée menu at Maria & Enzo’s is dedicated to pasta dishes, most familiar enough if you’ve dined at any non-chain Italian locations before, all priced around $25. Our server indicated the house specialty is the N’Casciata al Forno ($24), a baked pasta dish with meat ragu, peas, zucchini, and more of our new favorite, caciocavallo cheese. Upon arrival, it was tinier than I expected (ultimately, a good thing, since it is quite filling), but beautifully presented with the zucchini nicely layered over the baked pasta. Inside, it was tough to distinguish exactly what pasta was used (several shapes mixed and matched, it seems), but all of it was a tad overcooked, nearly mushy. The meat ragu was hearty and certainly more present than in the arancini, but in occasional large chunks that I wished had been better incorporated into the dish. Overall, it was bursting with the staples of Italian flavors: acidity from the ragu, sweet freshness from the peas and zucchini, a bit of tang from the cheese, but I would warn it’ll be a bit of a disappointment if you’re looking for a more traditional baked lasagna style dish. For our second entrée, we sampled a dish from the Parmigiana section of the menu (where choices include chicken, eggplant, and veal). I splurged for the veal, expecting another small portion, but was very pleasantly surprised when it arrived at our table. This veal chop (tenderized to a flat form, as is traditional for parmigiana) was served bone-in, and was nearly as large as the plate it was served on, easily twice as big as any other plate of food we had throughout the evening. Covered in fresh mozzarella and a bit of traditional Pomodoro sauce, and served alongside a portion of spaghetti dressed in the same Pomodoro, this dish was an absolute delight, even at $34. One portion can easily serve an army, and the flavor was great, too – crisp exterior with a tender veal cut inside, herbs from the breading and Pomodoro complementing the naturally sweet veal. I also had a chance to sample a few meatballs, straight from the Spaghetti alla Chitarra entrée, priced at $26. Slightly larger than a golf ball each, the meatballs were packed with herbs and spices (oregano and basil forward), and the accompanying red sauce brightened the very savory meat mixture (most definitely beef and pork both used here). I found them tasty, but I couldn’t say I’d be tempted to order the entrée unless I had a very picky eater or kid around – the veal parmigiana stole my heart, and the show, a few bites earlier. Given the focus on cocktails and wine on the menu, and since Disney Springs has now become a veritable hot spot for craft cocktails, I decided to sample a few of the most recommended drinks. From the I Classici portion of the menu, most recommended by our server and a manager who dropped by to greet us seemed to be the Manhattan via Milano and the Green Gin Smash. The manhattan, a tall, lighter take on the classic, uses Solerno blood orange to impart the traditional orange flavors in the drink, and Makers 46, Antica Formula Vermouth, as well as orange bitters and tarragon to round out the flavors. For those new to Manhattans, I’d recommend this drink as an introduction – not too sweet, easy to drink, and not overly vermouth-y, either (a definite positive, in my book).

The Green Gin Smash is similarly balanced, light and fresh, highlighting the botanicals of Hendricks alongside Ancho Reyes Verde, a green chile liqueur that gives the drink a pop of color and freshness alongside the sweet and earthy basil and cucumber notes. A bit of lime cuts the sweetness, making this a refreshing sippable option perfect for lunch or alongside a salad.

The cocktail list also offers straight pours of several Italian spirits ($7 per 1 oz pour), seasonal cocktails that will rotate every few months, and a few cocktails made with prosecco. The Passione, one such drink made with Prosecco Mionetto Superiore (a great mid-range, cheaper priced extra dry Prosecco), St. Germaine elderflower liqueur, and passionfruit puree, was my choice to pair with dessert. As expected, it was sweet and fruity, but a nice alternative to a typical Bellini (also offered on the menu), and another perfect lunch or brunch drink.

Finally, I dove into the heavily populated Negroni portion of the cocktail menu, sampling the Bianco, consisting of Carpano Bianco, Nolet’s Gin, Lillet Blanc, and Luxardo bitters. This cocktail won the night for me, shining as a well-balanced drink without also being light on the alcohol. For Negroni haters or newbies, I highly recommend this drink – it’s not overly bitter, and is a bit drier than normal, thanks to the Nolet’s. The remainder of the Negroni menu features similarly interesting drinks with quality spirits that I’ll be interested to try on future visits. The cannoli was the hard sell our server gave us from the dessert menu, but as I’d just tried the cannoli next door at Pizza Ponte (and believe they are exactly the same), I took a pass, favoring two other dishes instead: Enzo’s Torta ($10) and Affogato di Vesuvio ($12).

Up first, Enzo’s Torta, which disappeared off our plate faster than it took to arrive (which was very fast, for the record). This chocolate and marscarpone cheesecake dish was simple in ingredients and description, but incredibly rich and decadent in flavor. The cheesecake was, as expected from Italian cheesecake, light and creamy, with the tang of the marscarpone keeping the dish from tending too sweet. The dark chocolate garnishes and sauce lent a bit more richness to the plate, though I wished for a bit more of both as I approached the last bite. As great as the torta was, the affogato really blew it out of the water. A bit unexpected in presentation, the dish arrives in a lovely coffee cup, filled to the brim with cremma gelato and no noticeable espresso. It’s only when you dig a bit deeper into the cup and open the frozen gelato shell that you find the signature espresso, lurking inside, ready to perk you up. This isn’t the dish for you if you’re expecting the contrast of hot espresso over frozen gelato, but it certainly is a tasty one. The bitter and dark espresso melded with the sweet cream gelato so well, and the accents of the chocolate whipped cream and sweet white chocolate snow helped keep the whole thing from being too one-note. I couldn’t do more than a few bites of the dessert as a whole, but it is definitely a keeper.

From top to bottom, we had excellent service throughout our meal. Our server was super knowledgeable of everything on the menu, offering up personal and house recommendations at every turn (which I love from new restaurants). I found portions in the appetizers to be a bit small for the price, but the entrees and desserts were all reasonable for what I expected, comparable to other Italian locations around Walt Disney World. The cocktails, while all a bit light on the liquor for $14 each, are easy to drink and fine for accompanying food, though I would not make an effort to stop here just for drinks. All in all, the food was well cooked, flavorful and, while not groundbreaking in the Italian cuisine realm, Maria & Enzo’s better than most of Walt Disney World’s current efforts – it’s certainly worth a stop over Trattoria al Forno, and if reservations at Tutto Italia are hard to find, this might just be a perfect replacement at Disney Springs.

One thought on “Maria & Enzo’s Takes Flight with Fine Fare”