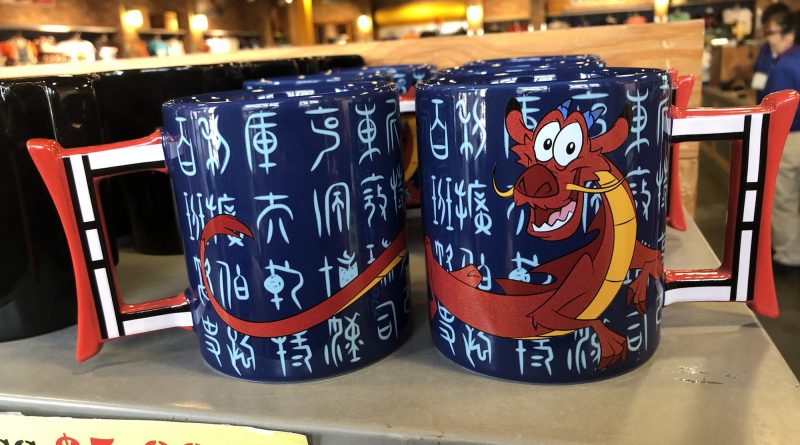 Welcome to the latest edition of The Magic, The Memories, and Merch! the longest running monthly look at the Disney Outlet Stores in Orlando. Just as Mickey’s PhilharMagic is going to Disney Parks around the world, this fine blog series is currently being cloned across the interwebs. But you have found the original, with me covering the Disney Character Warehouse on I-Drive and Secret Shopper Ben Wszalek at Vineland (see end of every Outlet Report for more details on each location.) Of course Christela McC is also here with a look at some Outlet items from California, and we saw a lot of crazy stuff this month.

Enough jibber jabber! Ready to see what we we found? Alright, let’s go!

With all the items from Pandora: The World of Avatar that have made their way to the Outlets, I’m surprised the Character Warehouse locations haven’t been renamed to the Windtraders Annex. Even more stuff arrived this month including these light up flip flops designed to look like Na’vi feet. Originally $29.99, now $14.99. And yes, I would have bought a pair if there were adult sizes.

The light up feature itself is meant to echo the “bioluminescence” found in Pandora. Here’s a photograph of the ground in Pandora taken yesterday by theme park photography legend @bioreconstruct. As you can see, it looks great after Disney touched it up. Here’s a close up photo.

I worked myself into a shoot with this Pandora beach towel. I wasn’t going to try and unfold it for a shot at the Outlets, so I brought it home for a picture. Unfortunately I lost my receipt and now don’t know what the price was. Feel confident it was about $7.99 though.

This is a notebook “themed” to the Pandora Conservation Initiative. Originally $14.99, not $8.99.

I’ve often said I’d love to be a fly on the wall for Disney merchandise pitch meetings, and definitely would have loved to hear the justification of this Na’vi keychain. If you can believe it, the price was originally $9.99.

Who outside of James Cameron himself would buy this “Helicoradian” figurine? At this point I could be convinced that Bob Iger and Bob Chapek are secretly using the Pandora gift shop as a money laundering operation. This thing was behind the counter and I was too embarrassed to ask the Cast Member to get it for me to check the price.

A whole bunch of themed socks were for sale this month, including the Na’vi ones pictured below. All were reduced to $3.99. I bought two pairs of the Pandora socks (which glow in the dark.) Also bought a pair of the Country Bears socks, which are straight from the Guy Selga Collection.

Tweedle Dee and Tweedle Dum along with 101 Dalmatians socks.

Beauty and the Beast socks and DARKWING DUCK!!!

Generally it is hit or miss when it comes to Disney Princess dresses, but the Outlets have seen a LOT in the past few months. So much so that this month they even had a Buy One, Get One At 50% discount (on top of the already reduced pricing.)

Huge sale on t-shirts this month with a bunch that were originally $24.99 being brought down to $9.99.

Sale included these two featuring the Seven Dwarfs and Pinocchio.

This one is for the all time books. Here is a shirt based on the Superbowl commercial where they ask a player (or players) on the winning team what they are going to do next, with the reply being, “I’m going to Disney World.” Now you can wear that branding at home. Originally $24.99, now $7.99. Here is the front… 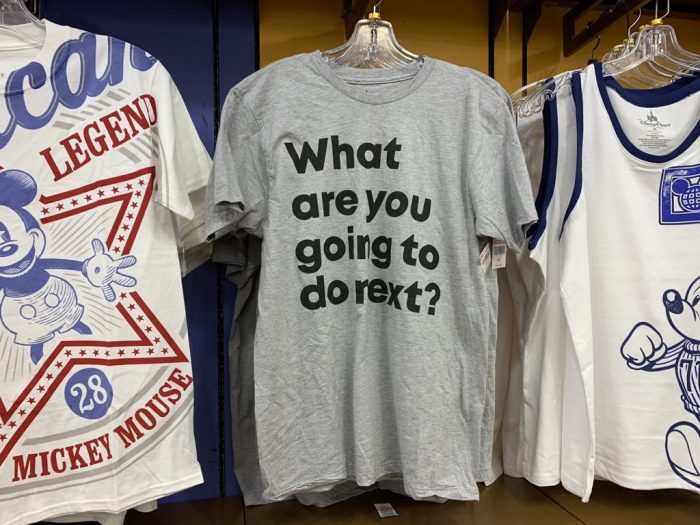 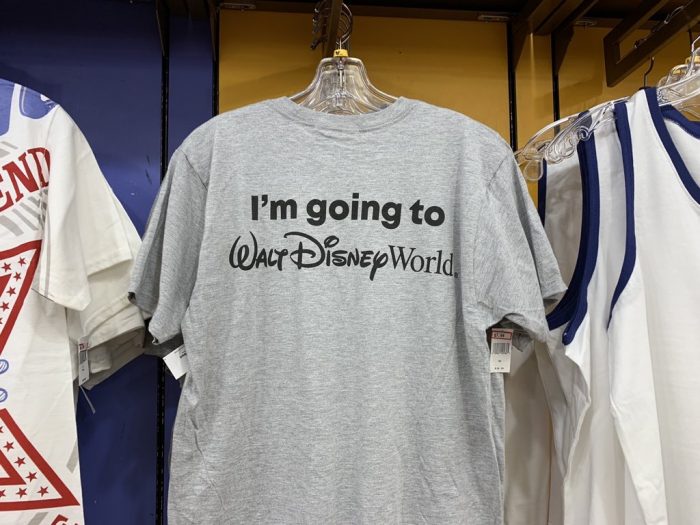 Here is an INCREDIBLE video that played with the “I’m going to Disney World!” commercial that was on Saturday Night Live back in the day. It had Baltimore Ravens player Ray Lewis inserted into the Beauty & the Beast cartoon, and its hilarious. CLICK HERE to watch.

Last month we showed the Buzz Lightyear Foam Costume, and this month a Sheriff Woody version showed up. Reduced to $7.99.

Stormtrooper photo clip frame. Originally $16.99, now $7.99. I’ve never been in a house or office where people use photo clip frames, but they must exists because Disney sells a lot of them.

Seemingly thousands of Solo pins were at the Outlet, with several different price points. These two featuring Han and Qi’ra were reduced to $6.99.

These two featuring Lando and Enfys Nest (I’m guessing, because I have no idea what SWOOP RIDING PIRATE refers to despite seeing the film) were originally $16.99, reduced to $6.99.

This one featuring Han and Chewie was reduced to $5.99.

These Qi’ra and Enfys Nest pins were reduced to $3.99. The Disney Outlet algorithm for what item gets reduced to what price is more complex than Zola’s algorithm in Captain America: Winter Soldier.

Meanwhile, they still can’t give away these Rogue One pins.

INTERMISSION! Time to head to California and see what @ChristelaMcC found at the Disney Outlet stores out there.

Before we start, Christela sent me a care package this month filled with items from the Cali Disney Outlets, and one of the things she put in the package was this “sorcerer” Mickey hat. Out in California, every morning when the Disney Outlet opens, the first guest is given one of these hats. They can’t do this in Florida because the eBay pirates would trample the Cast Member holding the hat upon opening the door, but it is definitely a neat thing to see at more civilized locations.

From Christela: “So the outlets and Disney stores do a full on ‘opening ceremony.’ At the outlets they roll this huge stand with a book on it to the front doors and a couple of Cast Members come out and tell everyone that the magic went to sleep overnight and ask if there is anyone who would like to help ‘wake up the magic.’

They pick 1 child or adult, if there are no children at opening to help. (On weekdays adults are often the only ones waiting to go in.) The CMs ask that person if they know any magical words. When the guests say it, the CMs get everyone to hold out their hands and shout that magic word to see if it will wake up the magic.

When that doesn’t work, the CMs bring out the hat, put it on the person and ask them to try again. It still doesn’t work, so they point out the words printed on the book and usually say something like “it looks like Mickey is giving us a hint. Maybe we should try saying Let the Magic Begin!” On the count of 3, everyone holds their hands out and yells it and the lights to the store magically turn on. The kids love it.”

“At the stores where they do the key, it’s a much shorter ceremony and the child simply helps them unlock the magic with a huge key and then they’re given a smaller version of the key to keep.” 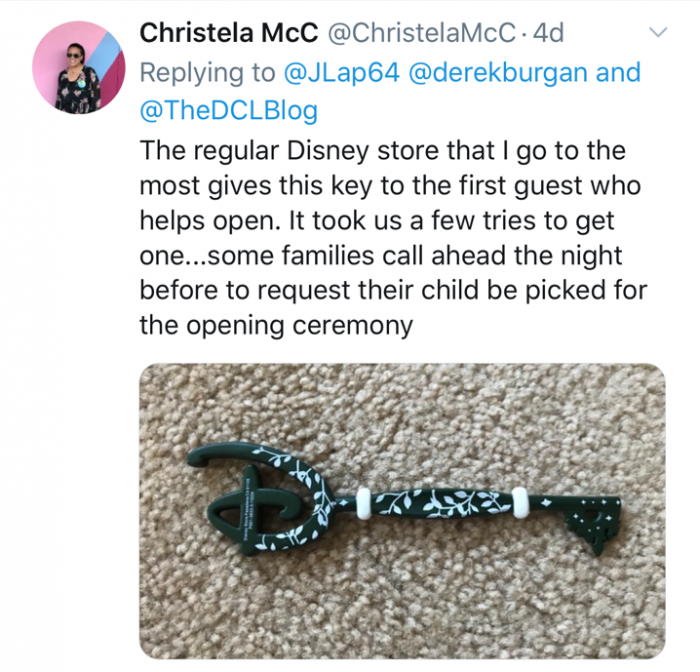 So for those keeping score, besides this opening ceremony gimmick, out in California they have double sided and seasonal pressed pennies, multiple flavors of churros, along with Pirates of the Caribbean and its a small world rides that blows ours in WDW away. #BeFairToFlorida

Okay, onto the Outlet finds. First up is this Disneyland towel. Reduced to $9.99. This is actually pretty cool with the monorail, train, Matterhorn and more. Definitely would have bought one if it was here in Florida. 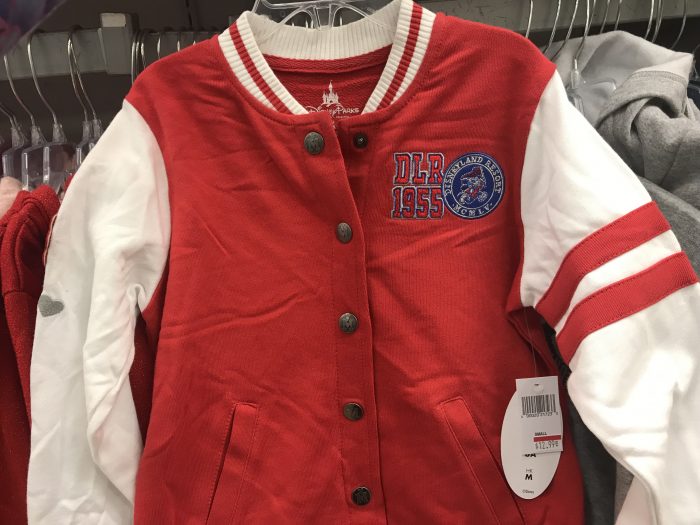 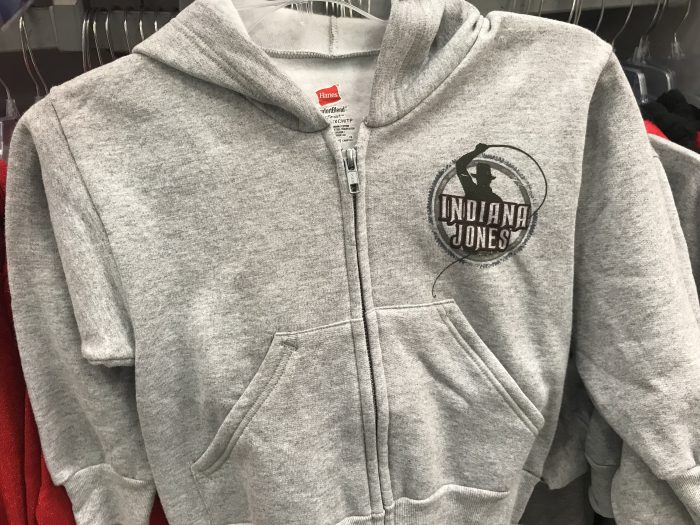 Big fan of this Splash Mountain pin. Even better, it moves (see video following.) Reduced to $2.99.

This Nightmare Before Christmas bag was originally $70! It has been reduced to $34.99.

This set features an interesting Ghost Pirate, but also a catapult for some reason. Originally $14.99, now $10.99.

While Hulk Hands are cool, these Groot Gloves are not. Actually they are more than a little weird. Even weirder? They aren’t sold as a set. They are sold INDIVIDUALLY. Originally an insane $28.99, now reduced to $1.99. Basically $30 for one Groot glove? Are we already in an episode of the new Twilight Zone reboot?!

And we’ll close our look at California this month with an X-mas themed Tinker Bell plush. Originally $24.99, now $4.99.

Let’s stay on Christmas items as our Outlets were deluged with t-shirts from Mickey’s Very Merry Christmas Party. Originally $32.86, they were reduced to just $3.99.

As you can see, there was enough to go around for everyone, including a design with Mickey inside a wreath. 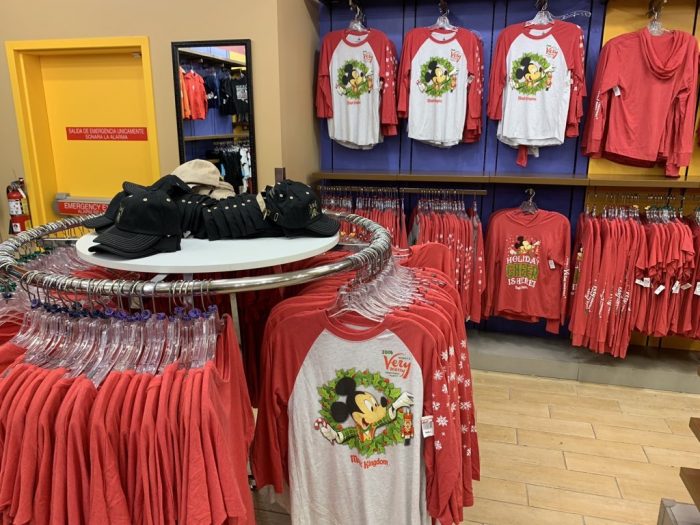 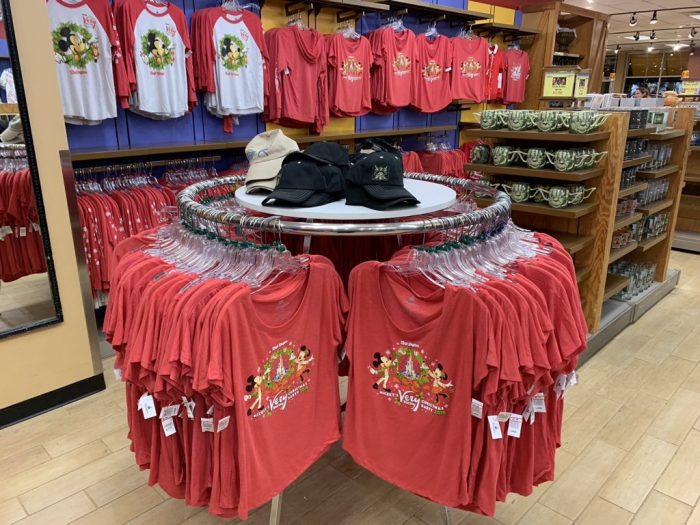 Anyone need a MVMCP shirt?

This old timey ornament must have been sold at DHS, because it matches right up with some of the decorations they had out during Christmas. 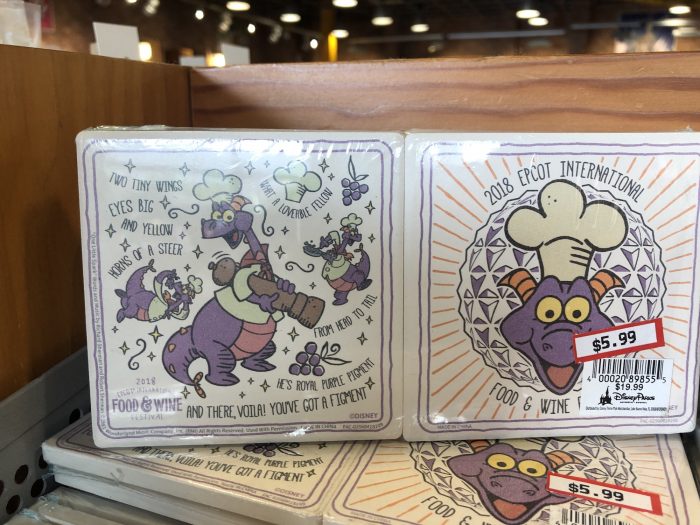 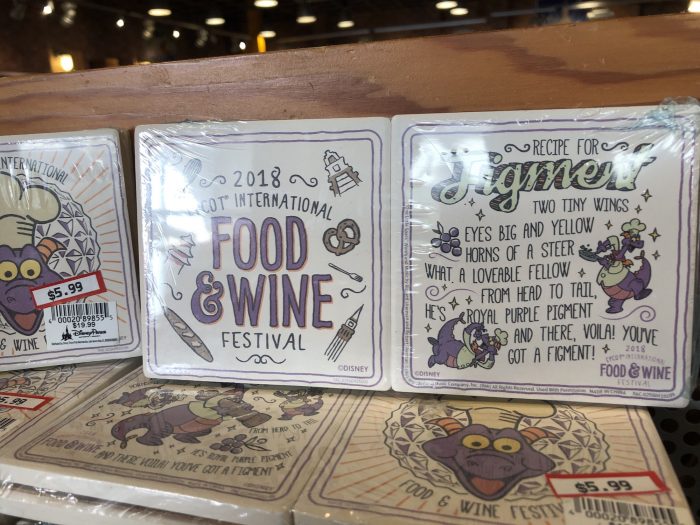 We finally found it. The most USELESS toy in the history of Disney. Imagine the ground that is covering. It’s called a “Mickey Hand Crash.” You press the black button on the bottom and the hand juts out about 2-3 inches and there is a sound effect like a piece of glass breaking. WHAT IS THE POINT IN THIS? Who would find this fun? Originally $9.99, now $3.99.

The Animator’s Collection series of dolls is by far and away my favorite. Love this cute anime-like style. Here both Elsa and Belle were originally $29.99, reduced to $12.99. 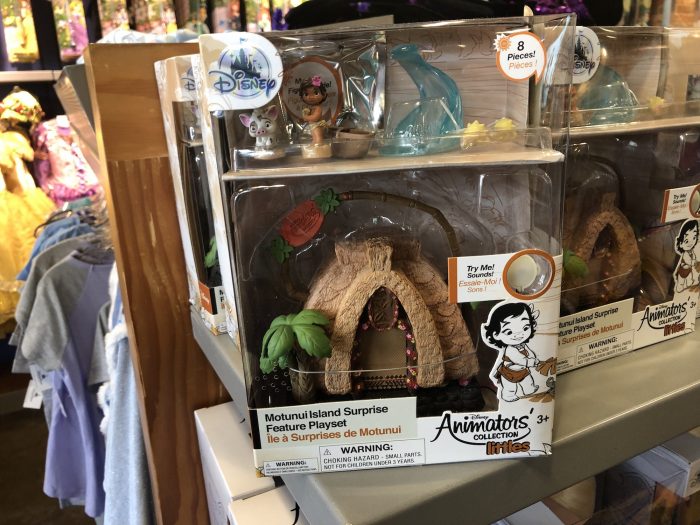 Did not get this Minnie Mouse one. Same price.

Not much new in the area of coffee cups this month, but this one featuring Mushu is pretty solid. Originally $16.99, now $5.99.

This Animal Kingdom 20th Anniversary hat was behind the counter and reduced to $34.99. The brim is made out of wood, and the box was linen covered. The original cost was $75.

Also behind the counter was this great Haunted Mansion plush set featuring the Hitchhiking Ghosts. Original price is $69.99 and it didn’t have a reduced sticker on it, so it could be one of the very few items in the store that hasn’t been discounted.

Before we leave this month, I want to point out the newest arrival at the Orlando Premium Outlets on International Drive. A kiosk selling APPLE FRIES appeared, like it was taken straight from my dream journal. Those who have heard me talk about Legoland Florida know how much I love the apple fries there. In fact, I would say it is the single greatest theme park snack. Seeing this kiosk at the Outlets almost brought me to tears.

A cup cost $7.50 (tax included) and comes with one side. I went with caramel because the combination of the apple fries and caramel is out of this world.

I rope dropped the kiosk, but during the day they have free samples to try.

Here is my order. Tasted incredible! Dreams have come true!

There are actually two Disney outlet stores in Orlando. Both are in Orlando Premium Outlet shopping complexes, and they are called Disney’s Character Warehouse, presumably because The Land Of Misfit Toys was already trademarked. There is one Character Warehouse located on International Drive close to Universal Studios (4951 International Dr, Orlando, FL 32819), and the other is on Vineland Avenue, right across I-4 near the exits to Disney World (8200 Vineland Ave, Orlando, FL 32821). They do not ship. There are items at the Outlets that you can buy both in Disney stores along with the Shop Disney Parks app, but you will be paying full retail for the items. For our CALIFORNIA OUTLET trips, @ChristelaMcC goes to the Las Americas outlet in San Diego. It is located right off the last U.S. exit.