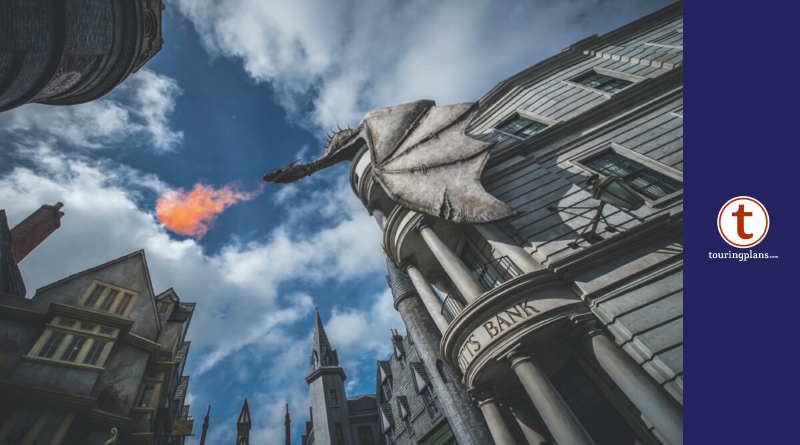 Universal Orlando Resort is reopened its theme parks on June 5. While Spider-Man still slings above New York City and Hogwarts’ gate is once again open, some things have changed to make guests safer in a COVID-19 world. Prior to opening for the general public Universal invited their Team Members and Annual Passholders to preview and test out those new security measures and protocols. We will go over some of those changes and what it means for your touring of the parks.

Universal Orlando is now offering a Virtual Queue option for many of its most popular attractions. Here’s how it works:

Now you will have a minimal wait in a standard, socially distanced queue. Guests are able to hold two passes at once and when one pass is redeemed they can book another.

Social distancing in the lab pic.twitter.com/Ljo8GXDN5G

Queues throughout the resort are modified to practice social distancing. Guests are spaced out 10 feet apart with markers and normal switchbacks are now reduced or eliminated. Some attractions that feature preshows rooms, such as at Men in Black and Gringotts, are turned off; guests now walk through the rooms as if they are standard queue space. The Simpsons Ride, Fallon, and Fast & Furious still operate their preshow rooms due to required safety spiels. If an attraction features 3D video, a Team Member will hand out the glasses to each guest. Additionally, prior to boarding, guests will be given hand sanitizer before handling ride vehicle restraints.

Characters are Universal, so we are excited to see our favorites return to the parks. Universal landed on a novel solution that takes cues from its Halloween Horror Nights event: characters now greet guests from a safe distance on stages. While on stage, the characters will interact with guests, pose for photos, and wave to all that pass by. Such character interactions include Marvel characters between Marvel Super Hero Island and the Toon Lagoon Amphitheater, Seuss Landing characters outside Circus McGurkus, The Simpsons in their Winnebago, the Knight Bus conductor at the back of the bus, Doc Brown working on the Time Train, and more.

While the Universal Superstar Parade is no longer running, some parade floats do make a small run around the park frequently to bring more character interaction to the streets.

Ollivanders Wand Experience is now a reservation system. You make a reservation with this person. #universalorlando #wizardingworldorlando pic.twitter.com/Z83j3iGMdM

Here at TouringPlans, we were wondering how an experience like Olivanders could work in a world of social distancing. Each Olivanders show places roughly 20 guests into a small room where one guest is picked to have a wand choose them. Universal took a page from Disney’s Savi’s Workshop and has made the Olivanders experience reservation only. Approach the Team Member in Diagon Alley (at this time outside the Fireworks store facade) or in Hogsmeade to schedule a time.

Had to! They bring out a “souvenir” menu, bring out plates and silverware on a tray that you take yourselves. Also stickers in the lobby. pic.twitter.com/KC4k30LbSB

Universal Dining has morphed, too. Full-service dining locations such as Mythos, Confisco Grill, Finnegan’s, Lombard’s, and more are running at a reduced capacity. Menus are now one-time use (a free souvenir? In a theme park?!), silverware and plates are presented on a tray you take yourself, and interactions with Team Members are kept to a minimum.

Counter-service restaurants now highlight mobile ordering; simply use the Universal Orlando app and order the food and beverages for the party. If a guest has an Annual Pass or Team Member discount, the difference is offered back in change at pick up. Seating and ordering change location to location. Indoor locations, such as Leaky Cauldron in Diagon Alley, seat you prior to order and the food is delivered to your table. Other venues operate like normal, including the illusive Wimpy’s Burgers in Toon Lagoon, which offers standard window ordering.

One food and beverage location NOT open currently are bars due to Florida regulations. Backwater Bar and Hog’s Head in Islands of Adventure along with Moe’s, Duff Gardens, and Finnegan’s in Universal Studios Florida remain closed. Florida Governor DeSantis announced recently bars can reopen June 5 but it is unknown when Universal will reopen their bars.

If guests require a rest, Universal has set up areas where social distancing is possible and masks are allowed to be removed. Named U-Rest, these areas sprinkled throughout the parks provide tables, chairs, umbrellas, and places to rest without having to wear a mask. U-Rest areas are subject to change and currently located at Port of Entry in Islands of Adventure, Central Park in Universal Studios Florida, and Fear Factor Live in Universal Studios Florida.

What’s a visit to Univerasl Orlando without a stay at their amazing resorts? This week the Universal hotels reopened, with Endless Summer Dockside and Portofino Bay remaining closed. Prior to entry a temperature check is required and masks must be worn at all times in public areas. Universal is only filling every other room on floors to keep social distancing when returning to your room.

These are the first looks at changes to Universal’s parks and resorts. While several of these changes are unique and specific to Universal, it is very possible these changes will be adopted at Disney parks as well. Universal has not stated an end date for their policies and procedures, but we expect them to last through the fall and until a therapeutic and/or vaccine for COVID-19 is developed.

Here’s the good news. A full day in the parks is still fun. And that is good. It was great to feel this happiness again. I felt safe, and I had fun. pic.twitter.com/BtCngKuTci

8 thoughts on “Observations from Reopening at Universal Orlando Resort”